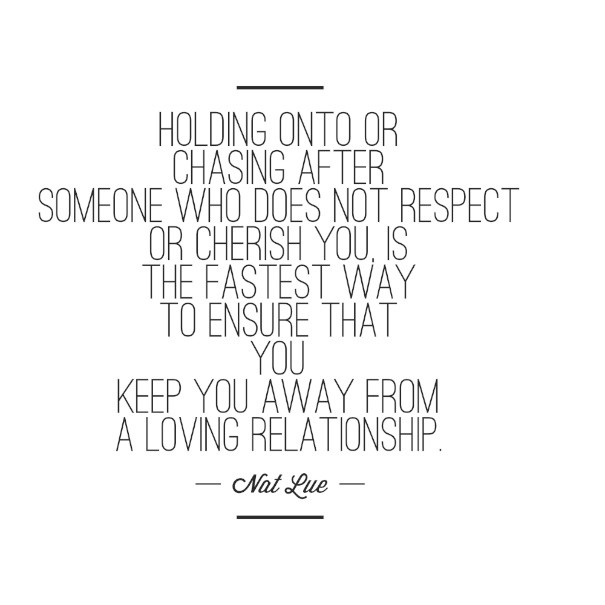 Some people don’t know how to just come correct and be straight up about what they want, so for example, when they want to end your relationship, they choose to opt for behaving badly in the hopes that you will do their dirty work and call time on it. What’s even funnier is that while some people who act this way do so because they actually want to opt out but have a fear of confrontation, plenty of people do it because they lack self-awareness and are afraid of committing so they act out to manage down your expectations but to also ease the discomfort that they’re afraid of being vulnerable enough to examine. What this means with the latter camp is that they will hint, you will [hopefully] end things but then they will suddenly feel out of control now that they’ve gotten the exact outcome that they wanted (not being committed, not having expectations, end of relationship) and start chasing you all over again and giving off mixed messages. You take the bait and boom, the cycle continues.

What you’re experiencing here is hinting and aside from it being indirect communication where the person ends up going around the houses and won’t take ownership of what they feel, think, want and need, it’s also a form of passive aggression and what is very often the case, especially with someone who is habitually passive aggressive, is that after you effectively being baited into exactly the reaction or outcome they wanted, not only will they not admit this but they will cling to their passive aggressive stance, claiming that your reaction is exactly why they were not honest. “See, this is why I don’t tell people how I feel or what I think. Look at the way he/she is reacting! They can’t handle the truth.” What the what now?

But here’s where things get extra confusing and problematic: when you won’t take the hint.

Sometimes, we’re too nice for our own good.

When a person keeps acting out and doing the equivalent of pulling down their pants and mooning at your relationship or slinking about as if they’re the teenager who has been grounded and is sulking at you in the hopes you will let them go out, yet you’re still right there trying to be all ‘super nice’ about it, not only will you lose respect for you but so will they.

You will inadvertently underline exactly why they feel that they ‘have’ to behave in this way.

They will then feel guilty about thinking bad things about you or acting out when you’re being so ‘nice’ and forgiving etc, so they’ll reach out or make promises that they cannot keep, so that they can relieve these uncomfortable feelings. Then they will feel resentful because when a person feels as if their conscience has been activated in order for them to comply with another person’s wishes or where they now feel as if they have to oblige themselves, it’s an automatic precursor to resentment.

Each time you do something from a place of guilt and faux obligation, you end up feeling resentful and this always leads to some level of acting out (passive aggression – covert and obstructive means of hinting at aggression while appearing compliant and ‘OK’) if these feelings aren’t acknowledged and an adjustment isn’t made that ensures that you come from a more boundaried place so that you stop taking responsibility for that person’s feelings and behaviour.

This is why it’s so vital to get honest with you about your motivations so that you don’t end up doing things for the wrong reasons such as doing pleasing things for a person who is treating you with less than love, care, trust and respect in the hopes of obligating them to do better by you.

With people pleasing, it’s not so much what you’re doing but why you’re doing it and when you change the why, you stop busting up your own boundaries and using guilt whether it’s your own or others, as the currency to engage with. You stop creating a debt that you’re then expecting others to pay off.

When a person keeps behaving badly and crossing your boundaries, they’re dropping big hints. The mistake is to assume that the hints are all about you; they’re telling you about themselves. 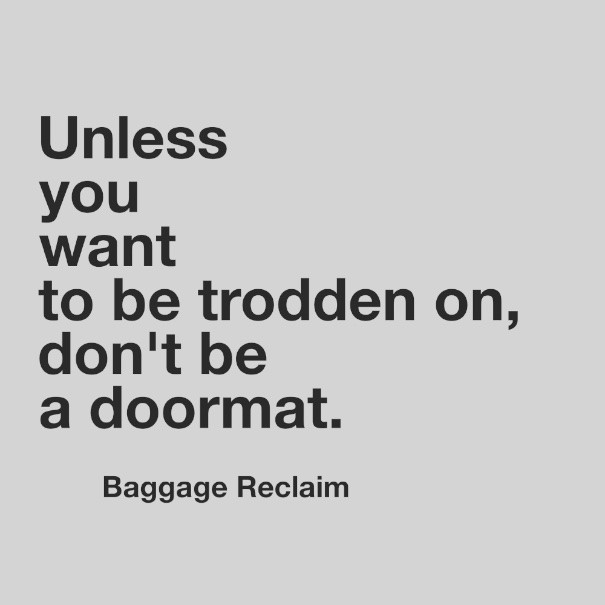 Can’t you see that I don’t give a damn about myself?

Can’t you see that I’m selfish?

Can’t you see that I’m using you?

Can’t you see that you deserve better than this? Why the hell are you accepting this?

They’re almost baiting you in to being ‘not-so-nice’. It’s like, How can you just sit there and take this? What’s your agenda? Get mad or something! Ditch my ass! Don’t tell me that you love and miss me after I just walked all over you. Cut me off so that I can then try to linger in your life trying to re-get your attention. But don’t give it to me even though I’m going to pursue you, because I’m only doing it because my ego is dented now that you see me clearly and have accepted my hints, that I now want you to contradict yourself. I will even act like I’ve changed (but I won’t have) and the moment you take me back and I feel in control, I’ll lose respect for you again. So stick to your guns because I’m a man/woman who doesn’t like himself/herself that much and who doesn’t know what the hell I want. Stick to your guns, respect yourself please and drop me a big fat hint by finding someone else instead of holding on to me in your mind as if I’m The Best Guy/Woman Ever TM. I’m not. Can’t you see that?

Love is not disrespect. Don’t paint a picture of yourself as somebody who will let a person do whatever they want because love respects you and them. It raises each of you up and you protect its integrity by being responsible and accountable and not sheltering each other from showing up and stepping up. You need to be with a grown-up. You need to know that you’re both grown up enough to be honest and that you will call each other out on your BS.

Stop being so there.

Stop trying to nice a person into having some basic decency.

Stop trying to oblige a person into changing so that you don’t have to get uncomfortable and start asking yourself why you’re doing what you’re doing.

Holding on to or chasing after someone who does not respect and cherish you is the fastest way to ensure that not only do you keep you away from a loving relationship but that you also end up out of love and like with yourself.

When a person keeps behaving badly to drop hints about who they are so that you will do the right thing by the situation, that they themselves won’t even acknowledge, don’t pretend that you’re not experiencing what you’re experiencing. Don’t collude with the BS. They are showing you that they are not up for the type of relationship that you’re hoping for.

Don’t keep trying to convince them because you will only end up being unconvinced about who you are and your worth.

Don’t meet hints with more hints via your people pleasing because in your efforts to look like The Good Guy or The Good Girl, you will not only end up feeling bad about yourself but you will sell you short in your efforts to relieve the discomfort you’re experiencing from knowing that you’re continuing in a situation that’s less than befitting of you.

Unless you want to be trodden on, don’t be a doormat. Be the thing that you seek.

Don’t forget – if you struggle with boundaries, I run a 30-day project, Embrace Healthy Boundaries which completely shakes up everything you know about boundaries and empowers you to treat you with love, care, trust and respect. Use the code RESPECTME to enjoy 25% off until midnight Sunday 22nd. Or check out The People Pleasing Diet if you have a big pleaser habit.

He broke up with me: Is he an assclown?
Frienvy - Envying What Your Friend Has
Why it's time to stop telling people what they want to hear (or what we *think* they want to hear)
Share this...