The importance of having ‘stranger awareness’ – don’t let people pretend that they know you better than they do! 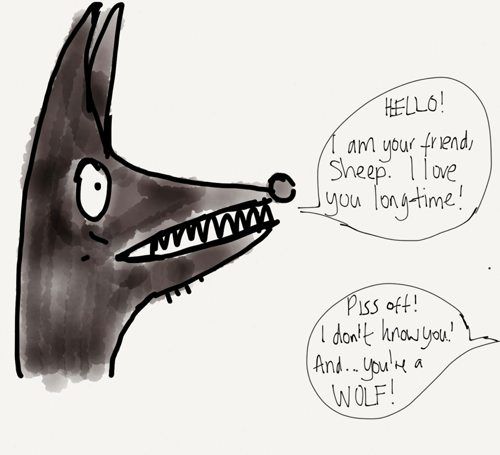 Sometimes I read stories from readers who are experiencing the drama that comes with trying to preserve a non-existent friendship with a stranger or who are feeling cut up over someone they didn’t actually know, or they are talking about a person with a level of familiarity that doesn’t reflect the true relationship, and I’m like one of those people shouting at the TV – “But they’re a stranger! That should be your first red flag!”

A stranger is someone you don’t know or who you’ve encountered but are not familiar with. The latter could also be deemed an acquaintance.

If you’ve forgotten about ‘stranger awareness’, it might be because:

The reason why I teach my girls (4 and 6) about stranger awareness isn’t because I want to scare the crap out of them but because it’s an early lesson in boundaries. Being streetwise enough to recognise stranger situations and to also have clear differentiations between strangers, acquaintances and friends means that they respect their own boundaries and those of others. It’s the same for us adults.

When we’re overfamiliar or allow others to be, our awareness is impacted including overriding feelings of discomfort or signs that something isn’t right. If we take our time and don’t force a familiarity that isn’t there, others cannot do it with us either.

In these modern times, we have in a relatively short period of time (less than a decade), diluted the true meaning of ‘friendship’ and ‘relationships’ with our online activity. For self-preservation, it’s critical to maintain your relationship smarts and to also differentiate between and value your close relationships.

To know someone is to have developed a relationship with them, which needs time and experience. You can’t fake or force a knowledge you don’t have.

If you mostly have assumptions, you don’t have knowledge regardless of how much time or experience you have with a person. This is why a relationship can end and you may be left feeling as if you didn’t really know your ex.

It’s also important to note that feeling as if you know someone isn’t the same as knowing them. Feelings aren’t facts.

You can also correspond with or have sex with a person for instance, but in reality you might only ‘know’ them in a certain capacity.

If you want to know a person, aside from having to put in time and have experience of them in a variety of situations, shrinking the number of assumptions by converting them into or replacing with facts is imperative.

When you have ‘stranger awareness’ and ultimately recognise that regardless of what has been said, thought, felt or done, that you’re strangers or at best acquaintances, this stops you from green lighting code amber and red issues. You will find it odd that somebody who you’re not as familiar with as say, an actual friend or family member, is making out like you’re on that level. You’ll find it odd that a stranger is trying to speed you with faux familiarity or be discomforted by the presence of code amber and red issues. You’ll also find it odd if you’re being overfamiliar.

When you’re familiar with a person:

When I’m around someone who I don’t know, regardless of whether they know people around me, I don’t know them so I don’t bowl in there like a bull in a china shop.

You can enjoy yourself around a stranger or acquaintance while anchored with your boundaries, sense of self and the knowledge that you are not yet familiar with each other. The latter piece of information should in itself moderate your thinking and behaviour plus you will look for cues and clues in your interactions that inform how you’re going to proceed.

It should go without saying but you’d be surprised how many of us end up ‘collecting’ people with this underlying belief: you don’t have to turn every stranger and acquaintance that you interact with or who shows some interest in you into a friend or relationship partner… Really.

Some people are not supposed to make into your Circle of Trust! Have some quality control and be discerning!

Pretending that you know someone more than you do is a means of creating faux intimacy and justifying your actions around them. This will only end up bringing you pain.

There’s also no way in hell that you should be stressing yourself out over a stranger or acquaintance and jumping through hoops. That’s a danger alert that raises the question: if you’ll do all of this for a stranger, what the hell would you do for someone that you do know? Don’t put question marks over your head.

When you’re around someone who is a stranger or acquaintance, you have to temper your thoughts and actions with, ‘I don’t know this person yet’; ‘I am getting to know this person’ and ‘It will take time to get to know him/her.’ This is no bad thing; it’s life.

'Time' isn't the only factor when considering dating a separated or recently divorced person
Fast-Forwarding: When Someone Speeds You Through Dating
Just Because You’ve Agreed To Something Previously, It Doesn’t Mean That You ‘Should’ Do So Again