The Pop-Up Relationship: The Temporary Romance That Expires & Never Develops 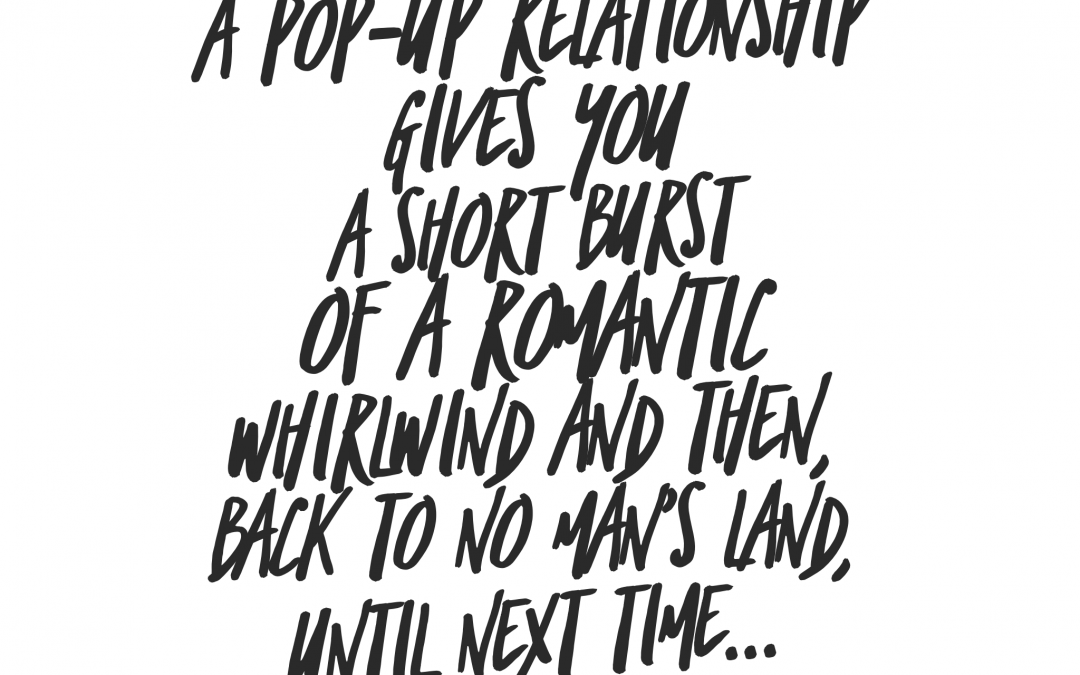 Have you ever spent time with somebody who gives amazing date, yet afterwards, it’s crickets? I did that on and off for four years. If you’d met us on dates, you’d be forgiven for thinking we were madly in love. Wearing the face off each other; barely able to keep our hands to ourselves; laughing and putting the world to rights. Sadly, as I mentioned in Mr Unavailable and the Fallback Girl, we’d have The Best Date Ever TM and then he’d go dark. Until next time.

I recently chatted with Margie who’s been ‘seeing’ (I use that word loosely) someone for two years. They have The Best Date/Weekend Ever every 4-6 weeks or so. She thinks they have an amazing connection. She also, however, is very concerned about how she’s on a permanent date with this guy when she technically wants to be in a serious relationship and settle down and have a family. The funny thing is, though, that all they have are these dates/weekends. That’s it. There’s no actual relationship in between. They exchange texts here and there but after two years, even that’s on the wane.

It’s now an established pattern that they can have a date or a weekend and that he will disappear. And she will be right there when he’s looking for entertainment again in the future.

In theory, walking away seems easy. Why would she want to keep seeing somebody who, in the space of two years, has spent the same amount of time with her that someone else would do in the space of a few months?

Margie’s focus on the feelings that she experiences on the dates blinds her to what she feels afterwards. It is a rollercoaster. She harbours a fantasy that one day he’s going to come to her and say, ‘Baby, thank you for your patience over this last two years. I’ve decided you’re the one and I want to be with you every day and live happily ever after. Let me knock you up this minute’. Not.gonna.happen.

When a relationship pops up for a short period and then disappears again, it’s a pop-up relationship (or even pop-up romance).

I have a number of friends who run their own pop-up shops. They don’t want the commitment of running a full-time store, so they temporarily rent a shop or turn their current space into one for a short time. They promote their pop-up, inviting regulars, etc., and they get to sample the joys of retail without too much investment. And, of course, they make lots of sales.

Similarly, there are people who like to sample aspects of a relationship. Think sex, companionship, and the excitement of possibilities. These people get to satisfy their curiosity about someone without having to get vulnerable and intimate. The involvements can be casual relationships. It also, however, covers an ex who boomerangs back into our life promising great change.

If you are involved with somebody who pops up from time to time and gives great date or a few dates before disappearing or reverting to their usual ‘Oops, I did it again. I played with your heart and made out that things would be different this time when they won’t’, you’re stuck in the cycle of the pop-up relationship.

These pop-up relationships feel romantic at the time but they come to an end. And then after a time, probably when the person feels sure that you’re not expecting too much, they hit the Reset Button. Boom, there’s another pop-up relationship and then lather, rinse, repeat.

You end up becoming almost desensitised to how neglectful the involvement is and normalising an unworkable situation.

Notice, also, how these relationships never really develop and deepen.

Well, how can they when you almost have to start over from scratch each time and they keep checking out?

If you believe that you want a committed, loving relationship and instead, you’re attending a pop-up relationship from time to time with someone who’s clearly partial to a spot of Future Faking and Fast Forwarding, you have to ask yourself, as discomforting as it might be, What’s going on with me that I would settle for something entirely different to that? It’s also asking, Where am I bullshitting myself?

If you were being absolutely clear with yourself about what you want, you wouldn’t settle for temporary attention.

There is a level of ambivalence about what you want. Otherwise, you wouldn’t be okay with their ambivalence that shows in their lack of consistency, intimacy, and actually, their general attentiveness. You wouldn’t settle for getting high periodically. Instead, you’d look to enjoy a more consistent, sustainable partnering. You wouldn’t be hiding behind their emotional unavailability.

‘We talk about so much’, said Margie. And yet, they have never talked about where the hell he goes for those weeks or what the hell is going on between them. This is despite having around nineteen opportunities to do so. In truth, Margie’s going out with her rolling stone father and hiding her fear of getting it wrong and her hurt over another relationship in this pop-up relationship.

Romance can seem easier than allowing ourselves to be seen.

A pop-up relationship where, for 24 hours (or however long), we get to pretend that we’re in a relationship and to play out our dreams about this person as well as ourselves, all the while knowing on some level that it’s not real and that they’ll be gone again, protects us from truly putting ourselves out there. We don’t have to share ourselves and put in the level of effort that a consistent relationship would need. At the same time, we wind up in an uncomfortable comfort zone where we give ourselves a hard time about our unmet needs and feel habitually neglected.

Acknowledging the overall cost of continuing to be involved with this person and how it blocks you from being available for an available relationship where you don’t have to wait around to be summoned provides the much-needed wake-up call. It’s also about being honest with yourself about your needs and what’s motivating you to settle for less. When you confront the pain, fear and guilt, the ambivalence and resistance will start to fade, and this person and their fly-by-night ways will no longer seem attractive or normal to you.

Getting To Grips With Sexual Values - Avoiding Sexual Insanity, Rewarding and Gratitude and more
We've Got To Stop Trying To Recoup Our Sunk Costs In Our Relationships
Compassion, Empathy, Sympathy, Hurt, Hinting and Kindness - 6 of the most misused words in relations...