The Trouble With Being Blinded By Intelligence in Dating and Relationships 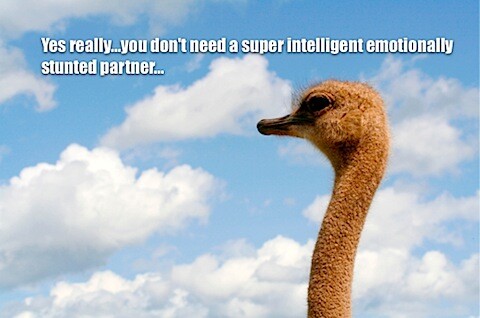 Recently I’ve found that quite a few readers place a high value on intelligence in their partners and it’s often the primary value that concerns them the most. These very same people are then bewildered as to why these ‘intelligent’ partners haven’t given them the relationship that they expected, and were in fact lacking in relationship and emotional smarts.

There’s nothing wrong with being attracted to or desiring intelligent partners but like anything you place a high value on, it’s important not to be blinded by it and make assumptions about qualities, characteristics and values that they might possess with that intelligence. It’s equally important not to overvalue that same quality or characteristic in yourself and be blinded to other aspects of you or use it to compensate for real intimacy.

If it was the case, many of the people who read Baggage Reclaim who are very intelligent or even super intelligent by some of their claims, wouldn’t be experiencing the problems that they do in their relationships and in general life.

For a start (and bearing in mind that biology wasn’t one of my favourite subjects at the convent school), the parts of the brain that we use for being intelligent are not the same as what we use for our emotions. It’s also easier when you are intelligent and very good in your field because you follow a path, there are specific skills, methodologies, theories, textbooks etc that you follow and generate results. Some are also natural aptitudes – something that most people just don’t have for relationships.

Being relationship and emotionally smart are different and are made exceptionally more complicated when you throw in libidos, experiences, interpretations, beliefs, values, how you’re raised, confidence levels, how emotionally available you are and of course your self-esteem. I know a hell of lot of people who have low or even zilch self-esteem that are very high achievers. Why? Because they have the knowledge and the skills and can just ‘get on with it’, and particularly if they avoid their feelings and intimacy and bury themselves in their intelligence or work, plus they get recognition and feel respected and good in that field, it’s an easier way of getting validation.

Without putting yourself fully into relationships and allowing yourself to be vulnerable and actually being relationship smart (as opposed to relying on your intellect and probably over intellectualising your interactions), relying on your intellect is basically like having an intelligent conversation with some sex and expectations thrown in and then thinking ‘Shazam! Job done and I didn’t even have to stretch myself emotionally.’

There are a lot more controlled elements with intelligence in the wider sense. You can be fairly sure that if you apply the knowledge and the skills and excel that great results will be achieved. Relationships don’t work that way.

As many of you have discovered, you can do something with the intentions to convey one thing and expect the other person to behave in a particular way, and then get an entirely different reaction.

So where does that leave you?

Don’t be blinded by anything that you deem to be of importance for you to forge a relationship or to be attracted. You can require whatever the hell you want in a partner but you still have to do the due diligence through the discovery phase of dating and actually get to know the person and not just sit there and say “Well they’re intelligent/beautiful/well educated/black/blonde/tall/great in bed/love the same interests hence ipso facto they will be able to love me, give me a relationship, and share the same values”.

Many of us fall into the trap of giving ourselves too much credit. We become attracted to someone, they possess certain qualities and characteristics and then we correlate it to the rest of them and assume that because we’re attracted to them, that they’re someone that’s ‘right’ for us that can give us the relationship we want. Hard as this may be to hear, that is laziness and blind assumptions.

It’s not about saying ‘Be with a stupid person’ because this is the extremes that I always encounter with this tenuous subject. This is the same thing I get when I say that you shouldn’t be blinded by chemistry, looks, passion, the colour of someone’s skin, how great they are in the sack, their physique, how much money they have. Next thing it’s:

So what are you trying to say Natalie? I should have a relationship with no chemistry/an ugly person/a dead fish/the opposite colour/someone that triggers my gag reflex when we have sex/someone who doesn’t take care of their body/somebody poor?

If you place a high value on intelligence, you still need to be involved with an intelligent, available person that you can have mutually fulfilling copiloted relationship with. Substitute ‘intelligence’ for whatever quality that you require and the computer will still spit out the same answer.

Many people wake up in a relationship that detracts from them and/or leaves them frustrated because they have things, like intelligence, that they’re blinded by that they use to override if not outright deny and obliterate real concerns in the relationship. That’s just not intelligent.

What you place a high value on in others says a lot about what you value or even overvalue in yourself or what you want someone else to bolster you with. If you’re intelligent or even ‘super’ intelligent, I suggest you don’t hide behind it and avoid emotionally engaging because it’s not anything close to an appropriate substitute. Just ask the Florence Nightingales of this world who fix/heal/help or those indispensable types that cook, clean, twist, turn, and contort for partners as a substitute for actual emotional intimacy and honesty.

If you don’t believe you’re that intelligent, putting someone on a pedestal and blowing smoke up their arse is also dangerous because it creates an imbalanced relationship where you’re looking up at them…from below. It’s also important to recognise that we can also be blinded to other great things in partners or ourselves when we only focus on one thing and make too many assumptions about it.

All that intelligence tells you is that they’re intelligent in the area(s) that you noticed their knowledge and skills. It’s one thing if they go on to demonstrate that they are relationship smart but if they don’t, you can’t stay there like a debt collector demanding that they pay up a skill that they don’t possess. While you may be tempted to ‘teach’ them, no ‘student’ learns anything and applies the knowledge in a subject that they’re not interested in or don’t ‘get’.

At the end of the day, like any assumption, if it doesn’t stack up in reality, you have to adjust your perceptions and expectations – that’s the intelligent thing to do.

Is He Going To Leave His Wife/Girlfriend For Me? Part One
Compatibility, Your Type, and Common Interests Part 5
Becoming isolated in relationships - Part One
Share this...