The under-receiving over-giver: Are you able to receive gifts, compliments or help? 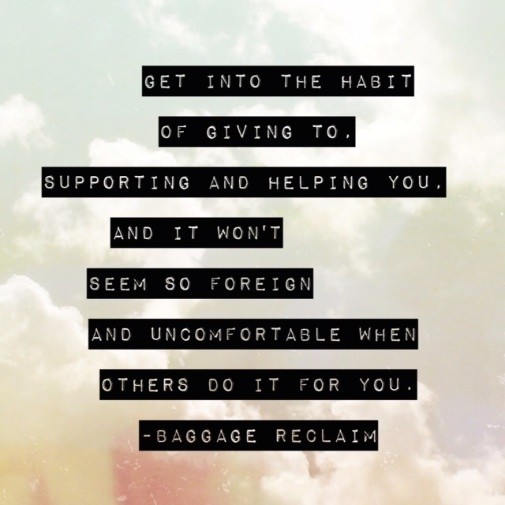 At a surprise party a few months back, I noticed something about the birthday girl: she was near having palpitations due to not being the organiser and was visibly stressed about receiving gifts and compliments. She didn’t know how to receive.

If you struggle to receive compliments, gifts, help, support, etc., you have receiving issues. You’re also likely to be an over-giving people-pleaser (over-givers tend to under-receive). Why? Each time somebody does something for you, you likely feel as if you have to bump up your efforts. You think you have to prove that you were worth the effort. A gift can’t just be a gift and help can’t just be help. You’ll stress over how you can show your appreciation and privately relieve the uneasiness caused by the gift or help through your giving.

Sometimes you just need to say “Thank you” or accept whatever it is rather than trying to be and do everything yourself. You don’t have to be in control all of the time, and there doesn’t need to be payback. Let [the right] people in.

When you struggle to receive, you’re often unaware of the internal struggle people trying to do things for you triggers. They don’t know about how it can bring up feelings of low self-worth or unpleasant associations. It can, for example, trigger the secret fear that they’ve based this giving on a perception of you that you worry about not living up to. There can be an irrational pressure where relieving that discomfort comes about from either shooting down their efforts or reciprocating (possibly over-reciprocating).

While there are people out there who give to receive (which is not the same as giving or gifting), what you forget when you have receiving issues is that a genuine gift is something that the person willingly gives because they want to.

It’s done without an agenda or expectation of what you will give in return and it’s their way of saying, Thank you or I really appreciate you or I was thinking about you.

If you feel guilty and even obliged to come up with a gift of equal level (or more), that’s kinda killing the whole gifting vibe.

You’re saying, Thank you for the gift. It made me feel really uncomfortable. I worried about what you (or others) might think of me if I didn’t give you something in return. What if in not doing so, I committed a faux pas? I don’t understand why you’re doing something for me? What are you expecting? I’m the pleaser – what are you trying to do? Usurp me? Ugh.

You got all of that from a gift? That sounds more like a burden!

I’ve seen this awkward scenario play out where because it’s now got all ‘transactional’, it becomes gift ping-pong. Where does it end?

Sometimes it’s about not knowing how to receive. Maybe you don’t give that much to you and your self-esteem is actually based on external esteem and what you do for others. Perhaps it feels super-weird when you’re not in the giver role. You may not feel deserving or know how to allow you to feel happy via the self-validation that happens with recognising that you are appreciated and that there are good, valid reasons that you are appreciated.

It can also be (and this was definitely a factor for me), about being suspicious of people’s motives. If you grow up in an environment where receiving a gift can be exploited and in fact, used against you, or you have experiences (childhood or adulthood) where you have a bad experience of dealing with somebody who was very transactional or manipulative, being ‘given’ to can be very stressful. When you examine and compare those past experiences with present-day ones though, there can be very stark differences that remind you not to tar people with the same brush. It’s critical to also spend some time doing some healing work to change the narrative around those events.

Compliments also give you a clue about someone’s self-image. Do they graciously accept and say thank you or shoot it down?

“Don’t say that. Have you seen how much weight I’ve put on? My hair is a hot mess too. I almost didn’t come today because…” And when they’re still going a few minutes later, you almost wish you hadn’t said anything. Although shooting down compliments or suspicion of them can be down to disbelief due to that person’s self-dislike, it can also be due to having negative associations with compliments due to having dealt with someone who used compliments to be manipulative. All compliments are then treated with suspicion.

There are people who’d rather implode than accept or ask for help, as well those who ‘get in their first’ and try to hog up all of the help because it’s their way of feeling in control and having a sense of purpose.

They don’t give others a chance to help, determining that because they didn’t do it previously that they won’t do it this time. Or, they feel that it’s just “easier” if they do it because at least it will be ‘correct’. These same people simmer with frustration, resentment and overwhelm, and often end up damn near having a nervous breakdown or burnout.

Does it feel good to…

I’m going to hazard a guess that the answer is… NO. So why continue? All it does is hold you in a pattern that doesn’t reflect who you truly are. It stops you from being authentic because it’s transactional instead of coming from a place of love, care, trust, and respect where you do things because you want to and it’s who you are, not because you’re coming from a place of fear, guilt and obligation. It’s also not fair to the other party because, yes, don’t accept stuff from shady folk but don’t treat all people as if they’re shady.

Learning to receive is about vulnerability.

Being vulnerable means that you don’t hide behind a role where you have to be the giver (or primary one). Instead, due to a more balanced relationship with you, you can allow healthy interpersonal relationships to be mutual instead of there being the imbalance that comes with the uneasiness of people-pleasing.

When you let people give you gifts or you let them support or help you, you’re being vulnerable enough to acknowledge that you are human instead of trying to be a superhero or the Energizer Bunny.

You can’t go around always being the giver because people who are not takers don’t want to be put in the position of always being takers just to appease your pattern and keep you in your comfort zone.

If people are being vulnerable with you and expressing how they feel about you through actions and words, or asking for help or support, or being vulnerable enough to show you that they’re struggling, why do you have to have the role of being giver, fixer, Florence? If you always meet people’s attempts to give to you with feeling obliged to reciprocate and then some, or to knock it back, what message is that sending to them? That you always expect something in return? Of course not.

Thank you is a really good start plus a heartfelt response including seeing that you genuinely appreciate the gift, is often thank you enough for the person who just wants to do something for you. And get into the habit of giving to, supporting and helping you and it won’t seem as if it’s shock of the century when others do this for you plus you will be able to discern healthy relationships from those with hidden agendas because you have that relationship with you already.

You're just not *that* intimate: No boundaries, no intimacy
Advice Wednesday: Do I Have Problems That I Can't Admit To Or Am I Being Manipulated?
Are You On Standby? Why You're Not Mr or Miss Last Minute Option
Share this...