There’s no need to keep justifying your feelings to *you* 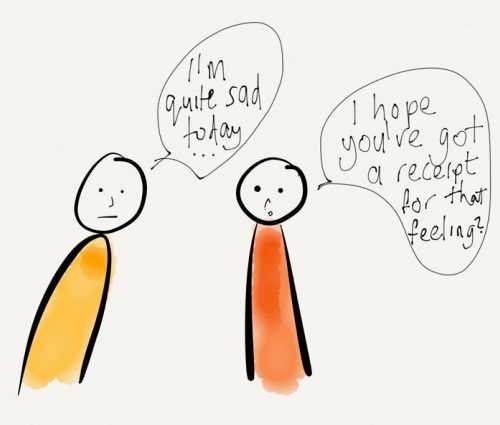 When people tell me stories, I’ve noticed that there’s this tendency to want to justify their feelings. If they’re angry, they feel bad for being angry as if their reason isn’t ‘reasonable’ enough and there’s an expectation that there’s always ‘supposed’ to be a logic to how they feel otherwise the feeling must be shut down or overridden. It’s tough enough to grow up in an environment or be in a relationship where your feelings are invalidated without then spending your whole life justifying yourself to you.

Constantly justifying yourself to you and others is literally draining and it removes your power because you’re constantly arguing with you as if you’re ‘wrong’ and that you have to legitimise your existence just to do the bare basics that other people get on with doing without having to practically go through a court hearing where you’re judge, juror, prosecutor and defendant. It’s no way to live.

If you’ve got to justify most or even all of what you do, to you or to others as if you have to justify a budget right down to the last penny, it makes making even the most basic of decisions pretty damn exhausting. It opens you up to second guessing and you tune out of your gut and inner voice because you’re too busy trying to be and do what some other voice in your head is telling you that you ‘should’. Why do you have to prove that your feelings are right and reasonable? They’re feelings!

How we feel at a particular moment in time or for a period of time isn’t a statement of the future. How we feel today about something might not be how we feel about it next week or even in the morning.

Feelings aren’t facts or permanent and they’re not supposed to be.

If we allow our feelings and thoughts to come to the surface instead of riding each one of them like Zorro and either shutting them down if we don’t like them or saying, ‘Explain yourself right now and prove each and every feeling!’, we get a chance to empathise with ourselves and explore where our feelings and thoughts are coming from and in turn this gives way to perspective.

We can’t learn very much by hating on every feeling that doesn’t pass some imaginary standard of what we think others would disapprove of if they could read our minds.

Feelings have movement – they do literally move on and yeah, they come back depending on what you’re doing or the situation. They’re not a one time thing. Each time a feeling comes back, it’s another opportunity to understand it and react to it in a slightly different and better way or to respond in a way that you know healthily soothes that feeling.

Our feelings aren’t always immediately logical or ‘sensible’ but when they’re allowed some recognition, over time that logic can reveal itself or it can be a very deep gut reaction that keeps you out of harm’s way and maybe much further down the line, you hear something about that person or situation that chimes with why you had that reaction.

Justifying how you feel causes you to ignore how you truly feel because you focus on ‘rightness’ and building your argument around that. When you justify yourself to others, you may put too much into telling them what they want to hear as opposed to respecting your own feelings and position.

You don’t get to recognise your emotions if you’re not willing to acknowledge their presence and pick your way around them in order to gradually make sense of them – it doesn’t have to be instant resolution.

I used to have a limited range of emotions – mad, bad, sad, cautious happiness, excitement, hurt, worthless. Now I have lots of different feelings and I’ve had to sit my way through them (even when I’ve wanted to run off) and work out what they are. “I’m hurt. Actually, no I’m not! I’m really effing angry and disappointed!”

Sometimes I experience something and the me right now feels fine but there’s an ‘inner me’, a younger me that feels a bit wounded. For instance, I have a half sister which some of you may recall I only found out about seven years ago… about five minutes before I met her. Anyway… Over the years we’ve gotten to know each other a little and on occasion, I’ve felt really pissed off with my father. At first I wondered if I was doing my whole jealous three-year old thing but no, that wasn’t it. It’s that when I was visiting him and my other two half sisters, he’d say that he was going to the shop for a few minutes, and then disappear for one, two, three hours and it turned out that he was sneaking off to meet her! That was when I realised that I don’t like being treated like the Other Woman and that when he does this, it also reminds me of being the kid who was waiting around. It’s also not fair on her and it doesn’t contribute positively to the relationship. Recognising what was going on meant that I didn’t end up feeling bad about it and making it all about me not being ‘good enough’.

The difference between justifying and understanding how you feel is that you need to be willing to do the on the job training of learning to recognise your emotions and also be willing to listen without judgement to your own feelings and thoughts, which takes practice, but really, it’s like getting into the habit of listening when people are talking to you instead of judging them or formulating your reply without truly hearing them.

When you justify, you’re always in the position of having to prove something, whether it’s proving your worth or the validity of your reasoning or feelings.

Looking to gain agreement from others and doing battle with you is how you end up being a validation seeking people pleaser that loses their identity due to suppressing their own needs, wishes and expectations. The fact that we get so focused on ‘reasonable reasons’ is why some people don’t leave relationships where they’re being mistreated or where they simply don’t feel the same way any longer. I’m not being cheated on or beaten up so how can I leave?

Of course we can’t let our feelings drive our lives, which is all the more reason to become acquainted with them and to be conscientious and mature when how we feel has the potential to greatly impact another. This isn’t so that we can censor ourselves in an effort to appease; it’s so that when we go some way to explaining (not justifying) in those circumstances where another party is involved, we don’t say shite like, “I don’t know how I feel but I know I said that I wanted to marry you last week but this week I’ve changed my mind. It is what it is.”

We don’t keep chopping and changing our feelings towards a person/our commitment. We don’t charge in throwing stuff out based on the mood we’re in at that moment without acknowledging that we still have to have the commitment to back it up. We acknowledge that when we’re seeking instant gratification or not thinking things through, that if we suggest or do things and then don’t follow through, that there are consequences. We recognise when we’ve felt a certain way before and done certain things off the back of it – it’s hilarious (not really) that a person can blow hot and cold with so many people and lack the ability to connect the dots and read their own behaviour and literally grow out of it.

Figure Out How You Feel & What You’re Experiencing With a Feelings Diary
Podcast Ep. 215: Fear of Criticism Doesn't Have To Run Your Life
How I learned to love myself Part 2