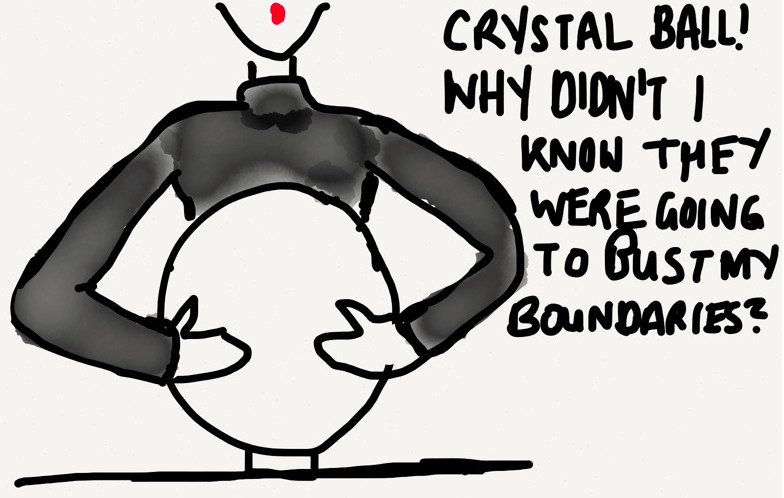 Picture this, summer 2013. I’m awake at what feels like an unholy hour as Em is away. Just as I’m drifting off again, I hear a notification and curious, I sleepily grab my phone and see a Facebook message from an old friend with only a few ‘bombshell’ words. As you can imagine in my line of work, there’s not much that people tell me that will shock so I had a ‘What the…’ moment… and promptly fell asleep again.

I woke an hour later believing that I’d dreamt the whole thing, but no. Due to bloody Facebook indicating that the message had been read, I sent a quick reply expressing support and they replied immediately asking to talk. Now I’ve gotta admit, it was a bit of a strange one as we’d only been in touch very occasionally.

I agreed to a quick call, stressing that the kids would be up shortly. We had a quick chat where they made some unsurprising revelations and then we got cut off (bloody Skype). Worried, I called back and this time video was showing although due to me using my iPhone, I didn’t notice for a couple of minutes. They said that they could see my ear and asked whether I could see them, and I moved my phone and realised that they were lying in bed naked. I shook my head in disbelief and I heard myself saying, “Um… yeah… I’m gonna hang up now” just as they made a vague attempt at covering themselves while giggling… and then got the cable of their iPhone earphones caught in the crack of their arse. I kid you not.

Laughing but feeling more than a tad unnerved, I called Em. We veered between laughter at the sheer bizarreness of the situation, indignation and a discomforting pity. Em was tempted to call them up but figured it was a waste of time as they’d admitted during the call that they were under the influence of drugs.

A few weeks went by and I got another early morning message asking to talk. I wasn’t falling for that one again – What? So I can get full frontal? Ha! – and declined. It’s not like I’ve never seen any of my friends naked but there’s a time, place, and context and it is weird to ‘see’ a person for the first time in ages with their bits and pieces hanging out plus it was just disrespectful. Sure, I could have told them all about themselves but I don’t really need to explain to an adult why that situation was wholly inappropriate. I know it was and that’s enough. That said, I can’t pretend it didn’t happen, so it’s up to me to be boundaried so that I don’t expose myself (haha) to the possibility of another rerun. I won’t be taking early morning calls or getting caught up in stuff like this due to feeling like I ‘should’ help. I did get an apology via Facebook (I know, I know) although I suspect that they don’t have a full recollection of what happened. They seemed regretful but I’ve returned to our previous state of not being in touch.

We’ve all done things that we regret. It can be difficult in situations where our lines are crossed in such a way, to know whether something is a reflection of overall character or some missteps in the moment or during a difficult period of time. Subsequent situations and actions no doubt reveal this. In my case, this type of thing isn’t a one-off for them in the bigger picture of their life elsewhere – when personalise things deeply, we forget that people have lives and incidences beyond us. If it’s a moment or a rough patch, it doesn’t mean that it’s a statement of the future. That said, there’s only a limited amount of analysis we can devote to other people’s actions especially when we have our own to deal with, plus sometimes you’ve just got to call a spade a spade.

In olden times I would have analysed the crappola out of it or felt as if I’d ‘invited’ this in some way, and that’s how one can end up going down a very dark path of being a blame absorber. I did have to ponder whether there had been an element of a ruse going on but top line: It was inappropriate albeit funny when I see the humour in it plus it felt weird and I felt a level of sadness for the situation but I can’t own their behaviour. Why or how that situation came about is an aside. It happened and it’s OK that I found it inappropriate. They’re my feelings and I say this because so many people tell me that they feel bad for feeling and thinking that something was inappropriate. Why? Recognition and acknowledgement is important. When we don’t do this, we make faulty decisions based on a faulty perspective where we’re too caught up in trying to control the uncontrollable and not feeling or looking a certain way. It’s about judging the situation.

Sometimes when we’re struggling with aspects of life or ourselves, we can end up leaning increasingly on the likes of drugs and alcohol to numb, enhance, or act as an upper. Unfortunately these substances increase the likelihood of regret and in turn we can end up feeling shame and other uncomfortable feelings, and in turn we can have more feelings and thoughts to ‘drown’.

When somebody crosses our boundaries in one of these situations (substances or not), we can be empathetic and recognise that they may be going through difficulties or may have certain habits that are counterproductive to a healthy situation but the key is not to be over empathetic and absorb the blame for their behaviour or keep coming up with all manner of justifications for what’s happening based on how we would see ourselves in the same situation. When we do the latter we’re empathising with ourselves, not them. We may also, by bowling in there and either hogging up the blame or trying to cover up for their behaviour, stop them from experiencing the natural consequences of their actions.

Sometimes you’ve got to ask: If a person’s not making their behaviour their problem and may not even see it as a problem (even if it is), why are you making it your problem?

Situations like this serve as a reminder that other people’s behaviour is very much about them and their beliefs, thoughts, fears, motivations, habits, struggles, etc. Yes, there may be certain things that we can do to ‘see off’ potentially problematic behaviour and situations before they fully unfold by being self-aware and cognisant of code amber and red behaviour but it’s important that we don’t beat ourselves up for not being psychic, more suspicious of even the most ordinary things, or for not having superhuman reflexes.  Ultimately, as long as we have an active response by addressing the situation and/or learning from the incident so that it informs how we deal with this person or similar situations in the future, we’re doing the best we can for ourselves at that time and moving forward. We don’t need to be perfect, we just need to be active.