What’s the problem with saying NO? When you have negative associations with NO 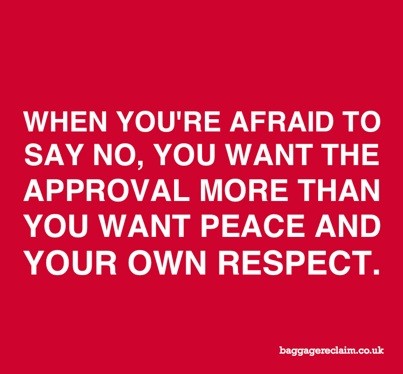 Many of the issues that affect our self-esteem and quality of life find their way back to boundaries, and when I talk to people who struggle with limits and respecting themselves or even others, not only is there always an issue with giving and receiving no, but there are negative associations with it.

For many ‘NO Strugglers’, being declined is a reminder of being denied something that they wanted (or a series of similar experiences) or is automatically equated with rejection and not being ‘good enough’. In fact they likely mix up disappointment and rejection so when they get a ‘negatory’ on their wishes and expectations, they struggle with the feelings and come to associate these with being rejected in some way, even though this will be a less than accurate version of events.

It’s this idea that all no is ‘bad’ and that when it’s been given rightly or wrongly, it’s been down to worth. Boundaries basically become a pain in the arse, that Party Pooper that wants to rain or even pee on their parade, or ‘joy blockers’.

When you’re a NO Struggler and have to respect your own boundaries and have limits, you rebel. You might want to say NO on one level but on another, you equate something like declining naughty foods, not buying something you like but don’t need, or having to step away from someone unhealthy, with denying you. Because you associate this with, for instance, being denied as a child, you may have decided that you’re not going to say NO to you and be like The Wicked Witch of the West or The Big Bad Wolf.

If people say NO to me, I perceive is as a rejection so I try to say YES as much as possible so that I don’t reject others but also in the hope that they’ll return the favour.

NO Strugglers also worry about how they ‘look’. How will people see me if I say NO?

If you worry about looking ‘bad’, what you may not realise is that this is how you see people who say ‘No’ to you. How do you feel about people who say it to you?

Having a negative association with no is a precursor to either running around saying yes even when it should be no, or feeling mangled by guilt and anxiety when you do exercise your option to say it.

You want the approval more than you want peace and your own respect.

No isn’t a dirty word and it’s very necessary for living your life authentically. We must learn boundaries and limits and we must respect those of others and the truth is, if we’re not respecting our own boundaries, we’re not being as respectful of other people’s boundaries as we think. We’re not.

Excessive ‘no’ earlier in your life may have caused you to be sensitive to it. Negative associations might be about being poor, being neglected, punishment, withholding, rejection etc. I couldn’t hack no because I thought it meant ‘failure to please’. The thing is, even people who literally have the means to never have to deny themselves anything have discovered that it doesn’t make them happy. They need some no in their lives.

There is such a thing as a positive NO. The option exists for a good reason – we have to turn down inappropriate things and say yes to what respects us as individuals and also respect others. Agreeing to people’s shady and unhealthy requests isn’t respectful; it’s enabling.

If you say ‘yes’ to everything, how genuine are your responses? How much appreciation do you have in your own life?

Learning to say NO defines your limits, respects you as a person, respects your time, and allows you to say yes positively. Recognising that I can say ‘No’ to my kids and set boundaries and still love them has helped me to do a hell of a lot of growing up about no and rejection. I have to do the same thing for me and I have to respect others.

Knowing your own boundaries is really invaluable because it gets you to consider what does and doesn’t work for you ahead of time (or after saying yes) and to keep listening through the feedback of your interactions. Recognising general unhealthy behaviour such as code amber and red behaviour and situations because you can say no with the knowledge of experience or the rule.

If you’re presented with the same type of situation over and over again that you say yes to when it should be no, where is the thought process? You have enough self-knowledge and experience to know that X doesn’t work for you because you end up feeling and doing Y and then Z outcome happens. If you thought about this instead of reliving memories or fantasising about an unrealistic future outcome based on repeating unproductive behaviour and thinking, you could change your present and future experiences.

By understanding why you have to say no to you on a certain thing or why you have to decline a certain type of request, when those requests come about, you understand why you’re saying no, validate your no with the knowledge of your boundaries and you don’t feel guilty and if you do, you validate again.

There are lots of different types of NO’s or situations that present themselves for saying no. If you lump them all into one ‘rejection’ or ‘terrible’ job lot, you group lots of unrelated items on the basis of all no being ‘bad’ instead of seeing that each of these situations is different. Undermining your own boundaries and decisions will only cause you to have to keep making the same ‘ole decisions and experiencing the same ‘ole pain. Saying, showing, meaning and sticking to no will change this.

We Have To Allow Our Friendships To Evolve
Reflections: Knowing Your Own Approval
Which Do You Prefer - The Problem or The Solution?