‘Why him/her and not me?’ Not everything is about us! 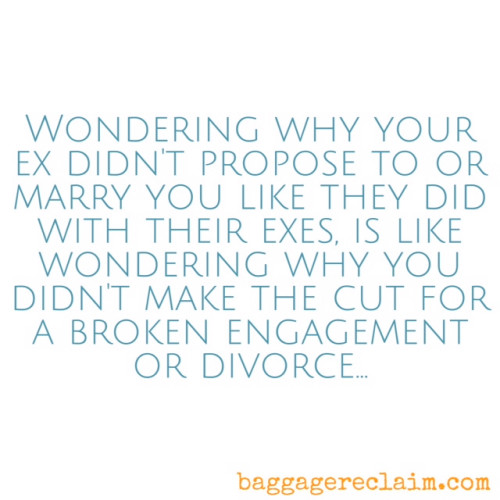 When we make other people’s behaviour about us, we not only end up distorting our own perspective but we also don’t see the wood for the trees. I often hear from men and women who when they’re stuck on a particular ex or even feeling territorial about all of their exes, they wonder, Why him/her [the new partner(s)] and not me? What’s wrong with me?

In these situations we forget that they’ve been with several people so there are several people who could be wondering exactly the same thing. Bearing in mind that we can get stuck on the why with regard to relationship prospects that didn’t come to fruition due to our feelings not being reciprocated, never mind the people we actually had something with, and it’s easy to see how we can get completely carried away with this distorted thinking if we don’t rein our egos in.

Even if we were the first person to be with our now ex and they’ve been with a few more people since, that’s a few more people that it didn’t work out with. Fact. Why do we do ourselves the disservice of casting our exes in The Perfect Life fairytale when they themselves will not regard their own life as such… even if they pretend that it is on Facebook…

We’re ex#1 and wondering, for instance, why they were with ex#2, 3 and 4 and are feeling jealous that they are currently with #5 and then agonising over what they could possibly have that we don’t. We might even take it as an additional insult that it hasn’t worked out with 2-4 and yet they haven’t come back to us, or that we’re the rainy day option that they fall back on between relationships but then they move onto the next ‘future ex’, likely slipping in some reminder about why it hasn’t worked out with us again while still ensuring that they keep a foothold in our life so that they can fall back on us, again. We’re so busy giving ourselves a hard time over these ‘amazing future’ exes and this better relationship that we feel entitled to with them, that we’re only too willing to hang around.

It’s the, I know you think that you can do better but when you find out that you can’t, I’ll be right here waiting for you attitude.

We’re wondering what’s wrong with us and unfairly judging ourselves against these people and for all we know, those same exes are judging themselves against us and/or wondering what’s wrong with them. We’re acting like there’s something deeply flawed within us as if to suggest that if we’d been “good enough” or even perfect enough, that they would not have even had to shop or dabble elsewhere – we have an I Must Get It Right First Time mentality but we’re also under the very mistaken impression that it’s another person that makes a person, so if we’d been able to change them or we’d been ‘good enough’ in the first place, then there wouldn’t have been the issues that we’re now conveniently forgetting while being focused on our ‘flaws’.

When we’re one of several relationships they’ve had, again, wondering why these people and not us and scalping ourselves with comparison, rewrites history and makes everything about us, when there are exes before and after us. Not everything is about us! Isn’t it just a tad too much to take it to our hearts, minds, and ego that an ex is forever more using us as a benchmark to make all of their dating and relationship decisions on? Imagine dating someone in the early 2000’s and now, here in 2014, they’re in a new relationship and when they think about what they do and don’t want, they step into their proverbial time machine and skip over all of the time that’s elapsed since then and go straight to their involvement with us and go, Yep, this one’s definitely not like him/her.

We’re only imagining that our so-called flaws or our involvement with them is at the forefront of their mind because we’re still stuck on the hurt and perceived rejection that we’ve been clobbering ourselves with ever since. It’s us benchmarking us. We imagine that they’re doing it because it’s what we’re doing in our own relationships whether we realise it or not.

Also, when we’re wondering, Why them and not me?, does this mean that all of our exes should be losing sleep over each other?

People say to me, ‘What’s wrong with me? He/she broke up with me X amount of years ago and has been married X times since. I don’t get it. They didn’t want to marry me.’ HE-LLO! They’ve been married however many times since! How much does our ego really need to say that we were one of the people that someone chose to get married to? As I pointed out to a reader, she needed to take her pick: Be one of four ex wives or be spared from that reality. Her fantasy that she should, would, and could have been the exception to the rule is just that – a fantasy.

Like I said to someone else who feels bad that her ex has been engaged several times since they broke up only just a few short years ago, “Um, me thinks that this man doesn’t know his arse from his elbow. He likes the feeling of being engaged more than the reality of commitment. I don’t know how he keeps a straight face when he’s proposing. I bet his family and friends have a ‘Here we go again!’ eye roll and side-eye….”

Another wondered why her shady husband played around behind her back (because he’s shady) instead of staying with her (because he’s shady) and felt tortured that he was off living some imagined fairy tale with that same woman. She came back to earth with a thud when she opened up the newspaper and read about the catalogue of abuse that he was being charged with…

Sometimes, in fact often, we can’t see past our nose to recognise what we’re being spared from – blessings in disguise – plus we deceive ourselves and conveniently forget the truth of the relationship in exchange for the lies we feed us about our ‘flaws’ and what’s so much ‘better’ in everyone else. We get hung up on who our ex is with because we’re afraid that their current partner or the next one might be ‘the one’ instead of a future ex. Even when it doesn’t work out, if we’re closed to budging from this belief that we’re “not good enough”, we can twist things around and think, Well I must have been really awful if they’ve had X exes since me. Say what? We end up basing our lives around, ‘Why him/her and not me? and end up obsessing and holding our breath, not realising that we could be using this time to work through our feelings and move onto a relationship more befitting of us instead of looking for signs in our ex’s life that we are indeed all of the worst things that believe about us. We continue acting as if somebody out there has stolen our identity and position with an ex.

Just Because Someone Says Something, It Doesn't Make It So (Don't let them use BS to blame you)
Dog In a Manger - When they don't want you but don't want anyone else to want you either
When the way we do things doesn't produce the desired & predicted results, it's not about whether we...