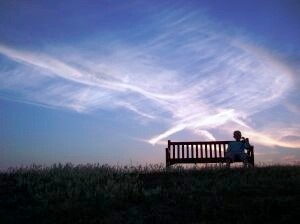 The harder you work at what is already on an imbalanced and unhealthy footing is the less mutual it becomes, especially as what you feel and do becomes distorted.

You’ll end up feeling rejected, being confused, in pursuit and feeling like you have to ‘win’ them over and in turn, not good enough, and you’ll get overwhelmed by your feelings if you don’t opt out at the lack of mutuality. It’ll become difficult to distinguish between who feels what and who is doing what.

And maybe that’s what’s so incredibly difficult to get your head around in these situations; how can you be feeling these feelings ‘alone’?

It can boggle the mind to fathom how you can feel something so deep, so all encompassing, so consuming…that the other person doesn’t feel. How can this be? Surely we can’t feel so intensely for someone without having some contribution from them?

It’s like raising your hand and saying “Gimme five…” and then being left hanging, only it’s your heart hanging over a precipice.

When I was with the guy with the girlfriend, believing that he felt the same kept me floating for several months. After that, I could only cocoon myself with these feelings for short periods because I realised that after the Future Faking came groundhog affair masquerading as One Day I Might Get My Unprincely Faux Prince if play my Other Woman cards right.

But then fighting against the realisation that in truth, no matter what he was feeling, it wasn’t mutual and it wasn’t something that actually looked and felt good, kept me holding on for about a year. It felt like I’d been a victim of a relationship-jacking. I’d been robbed! Where was the love? Where was the happiness? Where the frick was my self-esteem? Why was I alone most of the time or living off crumbs and stolen moments and yet in possession of such monumental feelings? And Lord help me, if he’d told me how we were ‘best friends’ one more time, I might have stuck his empty words where the sun don’t shine. These intense feelings and protestations for this ‘amazing’ ‘soul mate’ relationship that never actually was because it never took off and was never mutual were so disproportionate.

Relationships that aren’t mutual are like ‘restricted’ love. You’re never free to just to love and enjoy it. You’re free to let your imagination and even your libido run wild, it’s just that it’s incredibly painful when you realise that you’ve far outpaced reality.

You can be in love on your own but you actually can’t have a mutual relationship, one with love, care, trust, respect and shared values, on your own. Real, mutual love doesn’t have ‘buts’. You don’t need someone saying “I love you but…you know my situation” or “I love you but I can’t give you what you want” or even “I love you and we’ll always be friends but…”

You want someone to say “I love you” – simplicity. After they say it, you continue about your life together, a life I might add that reflects that of two people who love each other mutually. You hug, you kiss, you make plans, those plans come to fruition but before you even make plans, you can even get on and enjoy the simple, normal things that make up the day to day.

There’s no being left hanging. Loving someone that doesn’t step up and ‘meet’ you in a mutual relationship is like throwing your energy into the abyss. It’s demoralising.

It’s impossible to quantify what another person feels and work out if what you feel is what they feel. Any one of us can profess anything we like, hence why love is an action feeling. We see how mutual something is by the results. If you look around and you see the results are, that you’re still waiting around for someone to give you back what you’ve already been putting out, or that you’re in pain, miserable with fleeting highs, or you’re actually regarded casually or as a ‘friend’, that’s a poor result. It’s not one that you need to correct – it’s one you need to opt out of.

The first time I heard this line from the now infamous and heavily played song, I remember thinking that Adele could replace Mary J Blige as being the best Fallback Girl songwriter. And then I thought “How can it not be over for you, if it’s over for them?”

It’s like the relationship ends, or for some of you doesn’t get off the ground, but your feelings continue. You then have expectations that they should say or do certain things, or as Adele hoped, react a certain way and maybe even abandon a current relationship and hotfoot it back to you. You’d rather continue to have these expectations and continue to attempt to make good on them, than walk away.

One of the things I learned about myself that helped to impose an important boundary is that while loving myself is something that I myself can do, I can’t do all or the majority of the loving for a relationship.

This means that there must be proportionate relationship to back up my feelings or the deal is off. This put a stop to all Betting On Potential, being immersed in denying, rationalising, and minimising, and basically compensating for the type of effort that no-one should ever make up the shortfall for. If they’ve walked and moved on or are failing to to give me a mutually fulfilling relationship, I’m not going to fight for something that’s broken by its lack of mutuality.

If they’re not loving you back and reflecting it into a mutually fulfilling loving relationship, it’s time to step.

If you’re saying ‘let’s be together’ and they’re saying ‘Er…I’m still married/attached/my cat’s stuck up a tree/I’m not ready for a relationship/I don’t have clean drawers/or whatever’, it’s time to step.

Loving someone alone or in an imbalanced, unsatisfying, often somewhat ambiguous setting is beneath you. Mutual relationships take two and you can’t make someone love you. You’ve tried and it doesn’t work, so don’t continue to force it.

Separate out what you think, feel, see, and do. How much of this is evidentially similar to what they claim to think, feel, see, and do? Remember that love, even when it’s healthy doesn’t make you Siamese twins or Mystic Meg. You can only legislate for you. Love doesn’t create an IOU hence you don’t have to feel like you’re owed if you only get into and stay in this when it’s mutual.

You’re better than this. Pain is not love, it’s pain. Love does not sell you short.

Relationships are 100:100 - It's Tricky To Divide Up Relationships & People Into Halves
Check in with you when being around your family stresses you out
Who's Parked In Your Relationship Space?