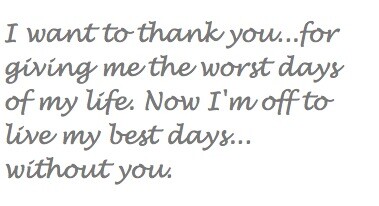 You deserve better than being with someone who thinks they’re so special while treating you in a less than manner. Stop blowing smoke up their bum and inflating their value – it’s like worshipping a false idol! That’s not a relationship – it’s being a groupie, fanatic or even worshipper. Are they changing the world? Have they come up with a cure for cancer? Did they create the world?

Never position someone anywhere in your mind or even your life, where they can look down on you. Be equal, or bounce.

You deserve better than being a bit on the side. Oh they may call you their ‘girlfriend/boyfriend’, ‘soul mate’, ‘best friend’ and yada yada yada but that’s like when actors get producers credits for a film without actually producing, or when someone’s given a title at work without the job to go with it. They’re married/attached – that’s game over, no credits. It doesn’t matter if they have a trillion excuses and a host of plans and promises – you’re a sideline piece. You don’t need to be scratching around for the dregs of a relationship. Stop treating them like they’re the last person on earth.

You deserve better than chasing someone in the hope that they’ll finally ‘let’ you ‘win’ them. How long can you keep running for? It’s like signing up to a long distance marathon with no end to it – it’s exhausting and even debilitating. Nobody is that special that they warrant you chasing them for their attention, validation, and eventually your dignity for months or even years on end.

You deserve better than a ‘faux friendship’ when you want a relationship. You’ve got plenty of friends – you don’t need one that’s trying to eff with your mind or eff you and enjoy other fringe benefits of a relationship without the commitment. No ‘friend’ needs to get to know you by lying on top of you or having you worrying yourself into a state about why they don’t want more or why they’re sending mixed messages.

You deserve better than an excuse filled relationship whether it’s yours or theirs. Stop lying to yourself so that you can make way for a relationship with substance instead of hot air.

You deserve better than fannying away your time wanting back someone that didn’t even treat you well. Value your life. How much time have you really got to sit around and ruminate about another person trying to work out what they think, feel, and do? How much time have you got to analyse? To ponder their next move? To avoid thinking about you? To avoid being a doer? To continue investing your time and energy into a ‘relationship’ that still, after all these months or even years doesn’t exist yet?

You deserve better than waiting around for someone to make up their mind about you. Let me tell you from personal experience and the observation of thousands of readers over the past six years – waiting around is degrading. It says “You are so important and special that I will sack off my life and wait around on the off chance that you will choo-choo-choose me.”

They’ve already chosen. You have. The choosing happens at the outset and every day we have to keep choosing that person – that’s a relationship. To continue to wait around for someone who hasn’t frickin chosen you, is to keep choosing not to be chosen. It’s like saying “I’m giving you a chance to make a different choice because I don’t like the choice you’ve made. Again.” Choose you, before you lose you.

You deserve better than a fantasy relationship. Stop fearing intimacy and having to stretch yourself in real situations.

You deserve better than being repeatedly rejected by someone. Two times (I know most people love a ‘second chance’) and then after that, it’s “See ya!” If you keep giving someone the opportunity to reject you, they will keep rejecting you because they know that they’re free to treat you this way and come back and pull the same stunts again.

You deserve better than going back to a relationship that has previously broken for all the right reasons. Don’t undo what was actually a good decision in your best interests because of your ego. You don’t need someone to make you the exception for it to be ‘love’ – stop trying to get love out of unlikely and broken places. Trust that your decisions are right and stop looking back.

You deserve better than being treated like hooker or a gigolo. Being objectified for sex will eat away at whatever self-esteem you have left. Nobody’s vagina or penis is that special. If you know that you struggle to deal with the emotional consequences of having sex, do not feel bad about knowing your limits and stop providing sexual service. You cannot use sex as back door entry into a relationship.

You deserve better than lies and abuse. Where you make room for them, more will follow and mushroom. People who take their time and look for smaller and medium sized action and matching talk, are not as prey to Future Faking – alarm bells should be ringing if the intensity and level of promises is disproportionate to the amount of time you know one another, or even how much you know. How can someone be telling you they love you when you don’t even know where they live? As for abuse, don’t reason or investigate it – just bounce. How many excuses you’ll make governs how deep you’ll get into an unhealthy situation.

You deserve better than thinking the worst. There’s better out there for you, believe it. There’s better experiences, better sense of self, better relationships, a better everything – a better mentality has to be a part of this. Stop looking for any ‘ole excuse to believe that the stories you tell yourself about why you can’t do this and you can’t do that and how you’ll never have a healthy relationship or that the world is full of jackasses. So what if yet another dodgy article gets published with dumb statistics about the lack of men, or divorce rates, or all the good black men are gone? It’s all a crock. And this is one particularly for the ladies – all this BS isn’t aimed at men as they don’t pay attention! Neither should we!

Be thankful for these ‘opportunities’ that reveal where you need to batten down the hatches and fix your broken windows and allow you to benefit from the lessons of reality. These ‘opportunities’ show you what doesn’t work for you and when people show you their arses, it’s OK – it’s not about you. What is about you, is you and what you do next when you’re presented with a situation that you know you need to back away from. You deserve better than talking yourself into another shady situation.

Happy Thanksgiving to my American readers!

When You Feel Like People Won't "Let" You Be Yourself
When You Believe That You Wouldn't Feel, Be Or Act A Certain Way Unless It Was Love
Understanding Why Relationships Don't Always Work Out