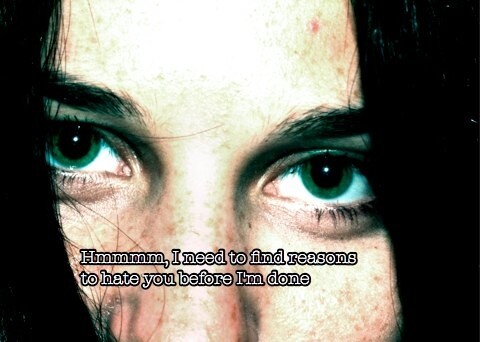 Over the years I’ve found that when it comes to making the decision to end a relationship and move on, there’s this misguided belief that you have to 1) hate/dislike someone 2) have no feelings for them or 3) find something wrong with them before you can break up.

What isn’t realised though is that by holding onto this belief, it means that not only is there a possibility that things may get a bit ‘extreme’ in the relationship, but that you’d almost want to mentally divorce yourself from the person while you’re still in the relationship, ‘grieve’, then say “sayonara”, and then skip off and move onto someone else. I imagine that it’s what those people who say dismissively “Oh it was over for weeks/months/years before I left” mean…

While there are of course relationships that don’t work out because feelings change, invariably the main reasons why relationships end is that irrespective of whatever feelings exist, you’re potentially two right for each other people behaving in counterproductive ways that eventually render you incompatible, or it may be just that you want different things (you don’t share the same values), they’re busting up your boundaries, displaying code amber and red behaviour etc, ultimately making you both incompatible. All of these things can happen without you hating their guts, being emotionally bankrupted, or even doing something so heinously wrong.

Classic examples of these situations:

While they may not say it out loud, many cheaters are waiting for their partner to do something so ‘bad’ that it would give them a legitimate reason to leave without saying ‘I’ve been cheating on you’.

Assuming that because you still have feelings for an ex and are even still hurting that the level of what you feel equates to how right the relationship/person is for you and using it as a sign that you should go back.

Remaining in the relationship because your trigger for ending it, is when you damn well near hate their guts or your spirit has become so broken you have no feelings left for them anyway.

Post breakup pretty much ‘villanising’ your ex which once you realise that you’ve been doing it may cause intense confusion and desire to go back because you then fixate on their ‘good points’.

Letting ‘good points’ totally override things that you have genuine concerns about in your relationship…even if the good points are being somewhat overvalued.

It’s dangerous to rely on extreme negative feelings as a benchmark for exiting, simply because there may already be a million and one reasons in existence before you even focus on how you feel. There are enough famous examples of less than exemplary people on this planet who have still had people love and even idolise them. I’ve read enough tales of people loving someone who treats them in a very less than manner that it’s quite obvious that what you can perceive as ‘love’ isn’t intrinsically linked to whether you should be together.

Just because you’re miserable on your own, doesn’t mean that the solution is to go and be miserable with someone else.

Likewise, just because you still have feelings for someone and they don’t bring out the same level of revulsion in you that a serious criminal would, it doesn’t mean you should be together.

Love, or what we perceive our love to be of someone doesn’t act as some sort of quality assuring, people picker. It’s like assuming “Hey, I don’t need to do any personal growth, have any common sense, use any judgement, have self-esteem, knowledge of boundaries and shady behaviour because I’ve got my love detector to identify who I should be with”.

Just like if you meet someone who is in possession of physical attributes, characteristics and qualities or even common interests that you find attractive and then over-correlate this information to the rest of them and assume that they’re a perfect match for you, when you assume that certain feelings will tell you when to take a parachute and jump, you’re giving yourself waaaaay too much credit.

Bearing in mind that some people mistake sexual connection for a love connection, are co-dependent, don’t like/love themselves, are attracted because of the person reflects unhealthy beliefs or an unhealthy pattern and may even be like an unhealthy parent, are ‘hooked’ on something that keeps them fixated on their partner, are dating out of loneliness, fear of it being the last chance saloon, collecting attention, and the list goes on, using what may actually be unhealthy feelings as your basis to stay, is a messy one way track to pain.

Because so many people use ‘extremes’ as a basis for leaving, they end up knee deep in unhealthy situations that they then find it very difficult to extricate themselves from.

In fact, this whole “I must hate their frickin guts / have no feelings left for them before I can leave or be done with them” malarky is the trying to think and feel things out to 100%. Some of you are literally waiting around for things to be ‘100% bad’.

Judging by the amount of people that listen to a lot of BS excuses, engage in denying, rationalising, and minimising, avoid making decisions, are afraid of rejection so avoiding it, have little or no boundaries, are not aware of unhealthy relationship behaviours and signs of disinterest, are hearing but not listening, it’s clear that relying on having no feelings or excessive dislike makes their 100% rather subjective – I’ve literally seen some people claim to love their partners more the worse they’re treated.

It’s very difficult to divide people up into the ‘good’ and ‘bad’ pile and the truth is that if you go to the trouble of ‘villanising’ a partner, you only end up making yourself feel like crap because internally or even out loud you’ll be saying “Jaysus, what the frick is wrong with me why I’d love someone so awful?” and then you’ll remember a good point and latch onto that and romanticise it.

Even when people have been involved with complete assclowns, they’ve had their ‘good days’ and ‘good times’. It’s true when they say that you can’t just switch off your feelings and by the same token, I don’t think you have to rustle up hate or overwhelming dislike in order to break up or move on, although I do believe that where you have been treated inappropriately, it’s important to get angry as part of the process of grieving the loss of the relationship and moving forward.

It’s also important to remember: Good, nice, kind, decent, happy, respectful, caring, loving, trusting and trustworthy people break up. Yes, really. It doesn’t have to get all Ike and Tina!

Better to keep it real, have good self-esteem, and recognise when a relationship isn’t working for you.

If you try to get to a point of hating / immensely disliking someone or looking for them to do something that you deem as ‘wrong’ enough to warrant you giving them the chop, or try to leave on ’empty’, you’re actually dishonouring your own relationship. It’s painful to be involved in a demi-relationship where someone is cruising on a half, quarter, or even drips of feeling – they deserve better, you deserve better.

Equally, you’ve got to know when to fold. Breakups hurt because they’re a loss and it involves the breaking of a relationship – trying to get out without feeling anything is another attempt at a shortcut. At whatever point you leave, it’s going to hurt to an extent so either way you have to deal with those feelings – don’t avoid them or try to get to extremes whether you’re in or out of the relationship.

The Dreamer & the Shopper: Have you inadvertently found yourself in a fantasy relationship?
We don't need to announce to our ex that we're 'over' them or ignoring them
Perspective Takes The Sting Out Of Rejection: It's Broken, You're Not