You Just Don’t Have That Kind Of Power: You Haven’t ‘Made’ Someone Be Or Do Something 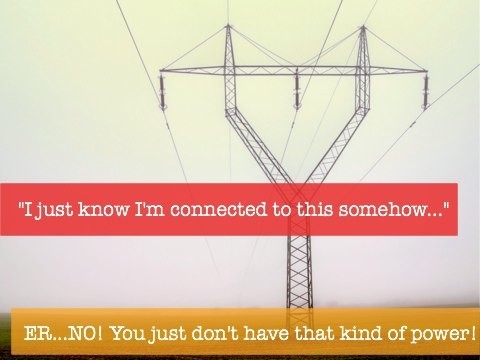 When you experience problems but are sidetracked with your own issues regarding how you feel about yourself or are clinging hard to beliefs that you’re stuck on, not only do you fail to compute the rather compelling topline data, but how you respond to the situation, emotionally and then physically through action, ends up being way off base.

The actual issue at hand viewed objectively and respecting each of you as individuals? Or, how the situation relates to your feelings of inadequacy? It might even be that it immediately triggers memories of another experience that left you feeling the same way, so you’ve already raced ahead and drawn a conclusion.

What are you actually responding to? The issue, or the bell tolling “Aha! See, I’m not good enough”?

How do you respond to the latter? Do you feel angry? Defensive? Rejected? Frustrated? Desperate? Scared? Vulnerable? Powerless? Helpless? Sad? Hurt? Ashamed? Rage? Victimised? Do you lose hope? Do you expect doom? Do you start objection handling?

But if you’re responding to how you feel about yourself or a distorted belief, what you’re not doing is responding to the situation at hand, which makes it very difficult to handle issues in reality or distinguish between your behaviour and theirs.

Your actions are about you as they’re what’s under your control. Their actions are about them. You make your choices and are influenced by various factors, just as they do. In a mutual relationship, you each tend to have more influencing factors in common because you have shared values.

Yet people love making Other People’s Behaviour about them, which is actually inverted ego issues, like some sort of whacked out reverse narcissism.

We can be very quick to spot behaviour like ego-stroking, collecting attention, being self-serving or at the extreme end being a narcissist, for the ego issues that they are, but so is persisting in identifying with “I’m not good enough”. It is very simply having a way of life that makes ‘everything’ about you, when it’s not.

You view life through a low self-esteem lens that makes as much as possible into confirmation of your lack of value, plus you see an opportunity to think the worst of you, and ‘everything’ seems to point to the ‘fact’ that you’re not being and doing ‘enough’.

If I’d believed I was a worthwhile and valuable person, I wouldn’t have given most of my exes the time of day, never mind the steam off my pee, or at the very least, these ‘relationships’ would have been over within a few days to 3 months.

Whenever I finally left, it’s because I clawed back whatever self-respect I had left and suddenly, albeit temporarily, stopped making everything about me. I saw the situation clearly enough to recognise that there were issues in existence, that would exist whether I had The Highest Self-Esteem In The Universe™…or the lowest.

When you let this percolate, hear it, feel it, see it, and don’t silence it with a steam train of “but but but” objections about your inadequacy, this is incredibly empowering and freeing.

“So hold up a frickin’ second here: I’m who I am. They’re who they are. And whether I showed up with Gwyneth Paltrow levels of self-esteem or showed up as me, there would still be issues? OHHHHHH…so it really isn’t about me.”

Which then begs the question: If you remove the whole “I’m not good enough” argument out of the equation and tell the but’s that follow to shut up, how does the same situation look?

The answer: Very different. This is the same by the way, for any belief that you’re stuck on that you challenge.

They look real and so do any issues, because while your own personal issues can and will improve when you change how you feel about you, what won’t change are any issues that pertain to them – that’s characteristics and values that you’re essentially at conflict over. You changing you isn’t going to change another person – you’re not capable of Jedi mind tricks and just don’t have that kind of influence and control.

Many people genuinely believe that they ‘made’ someone treat them in a less-than manner or exhibit characteristics and behaviours that were less than attractive and were in fact counterproductive to forging a mutually fulfilling relationship. If you’re thinking along these lines, you’re forgetting something crucial here:

If you believe that a great partner that’s worthy of love, care, trust, and respect, would have the power to, for instance:

5) Make someone leave their partner

6) Upgrade a booty call to a relationship

7) Make someone who is abusive not be

9) Force them to get over their ex

you need to evaluate and challenge your beliefs. You’re worthy even when you have incompatible values, when you experience conflict or disappointment (it’s unavoidable), when they’re unavailable, are already attached etc. The difference is that when you accept that you’re good enough, full stop, you would see the above situations for what they are.

You’re the one who is in charge of what you believe hence it’s you that can change the meaning that you attach to your experiences (“I’m not good enough”, “I’m a failure”, “I’m unlovable”) and your perception of them so you can see a situation in reality.

Because I can tell you right here:

When you realise that you don’t need to be a doormat in order to be a great partner, you recognise that you’re good enough anyway, live authentically, and recognise the inappropriateness of someone expecting you to offload your boundaries.

When you realise that you don’t need to be _________ (insert whatever unhealthy belief such as change their values, make them leave someone, make them change their mind about committing, dialalay.com) in order to be a great partner or good enough, because you already are, you stop doing things that make you feel bad in an attempt to feel good.

Sit down with a pen and paper, and imagine (don’t try and tell me that you haven’t got a good imagination because most BR readers are very proficient at illusion making), that you are good enough or that whatever you believe isn’t the case. Put yourself in those shoes and re-look at your situation with each of you owning your behaviour. What do you see? Who are they? What are their actions? Who are you? Take the specific incident or situation that you’re stuck on – how does it look now?

Choose not to make everything about you and keep choosing so you can be responsible and be in the driving seat of your life instead of feeling powerless.

Turning 'Rejection Talk' On Its Head - Looking At Your Rejection Experiences From a Different Perspe...
The People-Pleasing Diet: Why you've got to give up trying to please The Unpleasables
Moving On From Disappointment: Are you focused on the person, or on the bigger picture of your life?