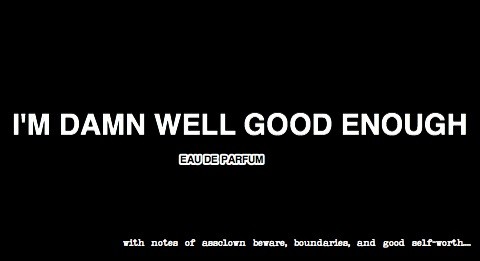 When your basis for accepting you is tied to whether others accept you first, it not only removes all of your power, but also your self-esteem and personal security because you’re tied to moving and changing external forces, some of which may be dodgy and unqualified to be determining your value.

When you throw in the fact that how you see things isn’t necessarily how someone else will see things, it also means that your idea of being accepted and their idea of accepting you may be two different things. This means that sometimes when you think that someone has made some big decision about your worth, they actually haven’t thought about it in the way that you think; they’re self-involved and doing what feels good for them regardless of how it may impact you or others.

If you accepted you, you could get on with dating and relationships instead of using them as vehicles to gain validation of the things that you don’t accept about you.

How can for instance, someone that you don’t know, reject you? They don’t know you – it’s an image of you, a fragment even. To think they ‘knew’ something critical about you, is to treat them as if they can smell Eau de I’m Not Good Enough that warns them to reject you before they even get to know you.

Of course many who have experienced this will argue to themselves that what little that they got to know was enough to put them off – they didn’t know you in entirety to reject you, the fundamental you as a person. They knew you on a surface level because it takes time and effort to get to know someone.

Often what’s actually being rejected isn’t the person per se – it’s what they come with and in turn what expectations may be created.

– They may for instance, be turning down the idea of being in something more than casual.

– They may be turning down behaving themselves and acting with at the very least, care, trust and respect.

– They may be turning down the opportunity to disappoint you even further in the long-run because they know what their limitations are.

– They may be turning down the possibility of starting something new because they know that they’re not ready, even if for a while they thought they were.

– They may be turning down meeting your needs because they can barely meet their own.

– They may be turning you down because their feelings are still tied up in someone else although they’d really like not to be – many of you can relate to this and it doesn’t make you The Big Bad Wolf. Sometimes you don’t know where you’re at emotionally until you start thinking about or trying to let a new person in. It’s better that they turned you down – many of you have experienced what it’s like to be with someone who hangs in there anyway in spite of being emotionally tied to their ex. One word: soul-destroying.

Even though there are many reasons why someone may not ‘opt in’ to the possibility of something with you, it can be easy to perceive not being called, or dates not progressing, or a relationship ending, as a sign that there is something ‘obviously’ rejectionable about you, and that depending on which stage it happened, they were able to figure this out without getting to know you and putting in the time and effort.

Of course, if they did spend some time and effort, you can convince yourself that you are so rejectionable, that they couldn’t appreciate you and the love you have on offer – you can see how you can talk yourself into it all being about you no matter what happens. This is even further exacerbated when you are with someone who truth be told, you either don’t truly like, never mind love them, or you chose them because you knew they had major issues or were even very shady, but you thought that you had a likelier chance of being accepted – then you think “I can’t believe that even they don’t want me – what’s wrong with me?”

If they don’t call, you think that you were rejected before you even made it to a date. Was it a word you wrote in your email? Was it your tone in the phone call? Was it the speed that you replied to a text? Did someone tell them something about you? Did they watch you when you weren’t looking and realise that you weren’t good enough when you were holding your drink at a 14 degree angle? Did someone ‘better’ than you come along?

If you don’t get past the first date, you think that they sussed you in an evening and you behaved heinously wrong or have got Eau de I’m Not Good Enough seeping out of your pores. You work your way back through the conversation, or imagine the kiss and wonder was it how you kissed or tasted? Were you too eager? Were you not eager enough? Was it because you agreed to another date? Or maybe it was your job or an accomplishment? Maybe it was agreeing to go back to their place? Maybe it was the Spanx or the big granny knickers? Maybe you weren’t assertive enough? Maybe you were too quiet? Too loud? Ordered a steak when you should have ordered a salad?

You’re not wearing Eau de I’m Not Good Enough. These thoughts, this perspective is in your head, hence you don’t have to continue to think and see this way because it’s like seeing everything in monetary units of your self-esteem when these things are happening independently of your worth anyway. It’s like going around taking unrelated events with their own controlling forces and going ‘Ha! It’s my low self-worth that caused this!”

This is all bullshit. It also inadvertently makes the other party look like a complete and utter numpty if this is truly the reasoning that serves as their basis for ‘ruling you out’, which means you’re actually only giving yourself reasons why they need to be taking a run and jump anyway.

Your thoughts?
Discover more about why you’re not wearing a sign on your forehead or giving off a not good enough scent in book and ebook Mr Unavailable and the Fallback Girl, plus if you’d like to work on your self-esteem this summer, sign up for my Build Your Self-Esteem eCourse.

On being the 'bigger' person: Why it's time to stop engaging - choose how you want to respond
When Knowing That You're Crazy About Them / In Pain Is As Good As 'Having' You
Why You Need To Drop Convincing Out of Your Relationships