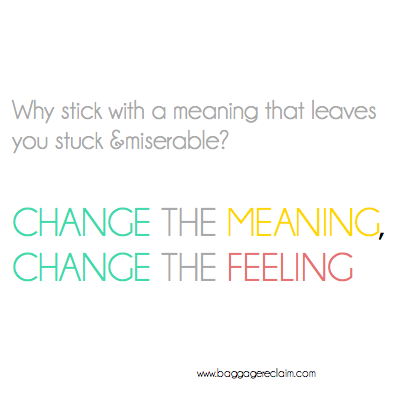 Throughout my life I’ve had various experiences that have impacted me and triggered some judgement of me (by me) and then later down the line, those experiences have had less of a hold on me. In retrospect I learned that the meaning of these difficult experiences changed when my perspective changed and in turn how I felt shifted dramatically and I was able to ‘let go’. I can go from feeling guilty, burdened or wounded to lighter, freer, happier.

Recently as I’ve contemplated my own feelings from the fallout with my father and co, I homed in on a feeling that ‘shouldn’t’ be there but it was – guilt – and it’s put this whole ‘perspective thing’ to the test. It wasn’t abandonment (that ship has sailed a long time ago – you can’t do what’s already been done), it definitely was disappointment, there was some rejection which was actually more feeling unsupported and betrayed, and I’ve moved beyond feeling angry or frustrated. It was guilt.

I realised that even though it wasn’t an overwhelming feeling, I had felt some level of guilt in response to all of their reactions.

I felt like I had done something wrong, that I failed in an obligation, which is just downright ridiculous – this whole thing is about my father who hadn’t been around since I was very young (I have no memory of my parents together unless you count the tension at pickup and drop off for visitations) feeling that he should be walking me down the aisle because I’m his daughter, even though I was raised by someone else.

Rationally and logically I know that I shouldn’t have felt guilty and yet it would pop up and then I’d remind myself. The funny thing is that yeah they’ve all said stuff (or moaned about it and then I’ve heard it back through Chinese Whispers) but to be fair, this whole guilt thing has a lot to do with me because I am the one who somewhere along the line has taken some meaning to imply that I ‘should’ feel guilt. I don’t have to though. However a few days ago I got wind that someone else who fell out with them a long time ago is ‘back’. I was thinking about what happened there and the whole debacle and then it hit me: Er, this is pretty much the same thing that happened to you and to your brother, only it happened before you were born. Same characters, same dynamic, similar issues.

I’ve had to heed my own words – it’s not about me. It’s not about you. It’s personal in that it happened to me (or to you) but what has happened is not specific to me or to you.

Yes you have your experience with them but this is bigger than the situation or your involvement with them. There is this whole wanting to feel like we’re ‘bigger’ than, well, everything (I think it’s to validate our experience of them), and one of the ways we can make ourselves seem like we’re super-important is by blaming ourselves .

People don’t roll out different characters for different people and when you can look beyond your own situation and feelings, you can see that these people have ‘form’ for this or that even if the situations are different and they appear to have ‘better’ relationships with other people, the same problem factors like, for instance, lack of empathy, lack of support, betrayal, actions not matching words, responsibility dodging or whatever are still there.

Yes of course you would prefer not to be having a difficult time with them but don’t kid yourself and think that you’d be skipping through a happy clappy land full of butterflies and rainbows. You’re either suggesting that they’ve had a whole character change for you or after you (which would be pretty spectacular considering how much work goes into changing ourselves for ourselves), or, you’ve got to admit into ‘evidence’ that what you’re dealing with existed before you came along. You may have thought you’d get a better ‘deal’, you may have though that you’d be the exception, but you weren’t. It sucks, but at least when we recognise that we wanted something better than what was, it’s actually admission of the existence of the problems.

Recognising the pattern that stretches back for decades gave me a lightbulb moment and I instantly felt lighter. Oh it’ll take time to totally move on, but it’s funny how as one person bows out (me), someone else steps back in and the dynamic will be put to the test again.

The fact that we can languish on a rejection and ruminate for weeks, months or even years on end, or that we take the blame even when it’s not our fault, or we get stuck on regret, or feel abandoned, or can gradually bounce back again and feel happy is all about the meanings we take away from these experiences.

It’s very easy to ride with what you know. I used to tell myself that I was having an extended run of bad luck, that there was something ‘about me’ that turned available men into unavailable men, and that I just wasn’t good enough. I took these meanings from various different experiences and you know, I could have kept going with that and I’d still be riding the Mr Unavailable merry-go-round completely blind to what was really going on. Baggage Reclaim wouldn’t even exist!

Change the meaning, change the feeling. I’m living by BR’s ethos – reclaim you, offload your baggage. I already feel lighter. You can too.

Podcast Ep. 132: Fear of sacrifice, loss and being trapped
Don't mistake awareness of the past with holding a grudge or a necessity to press the Reset Button
Podcast Ep. 182: Your 'Worthiness' ISN'T To Blame