You can change your version of normal at any time 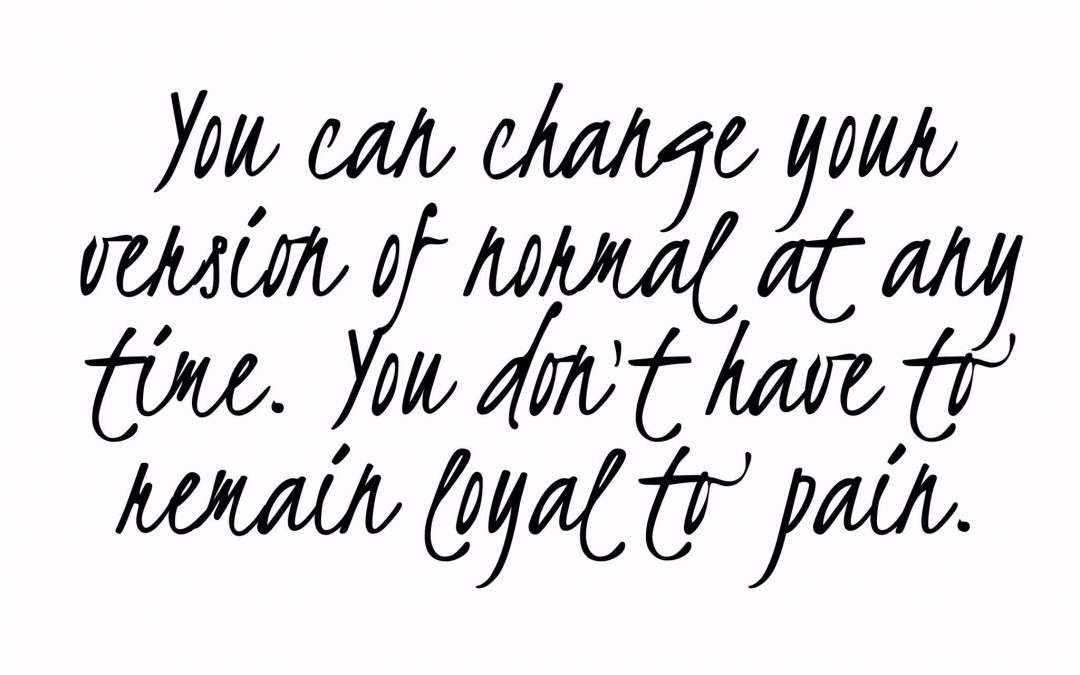 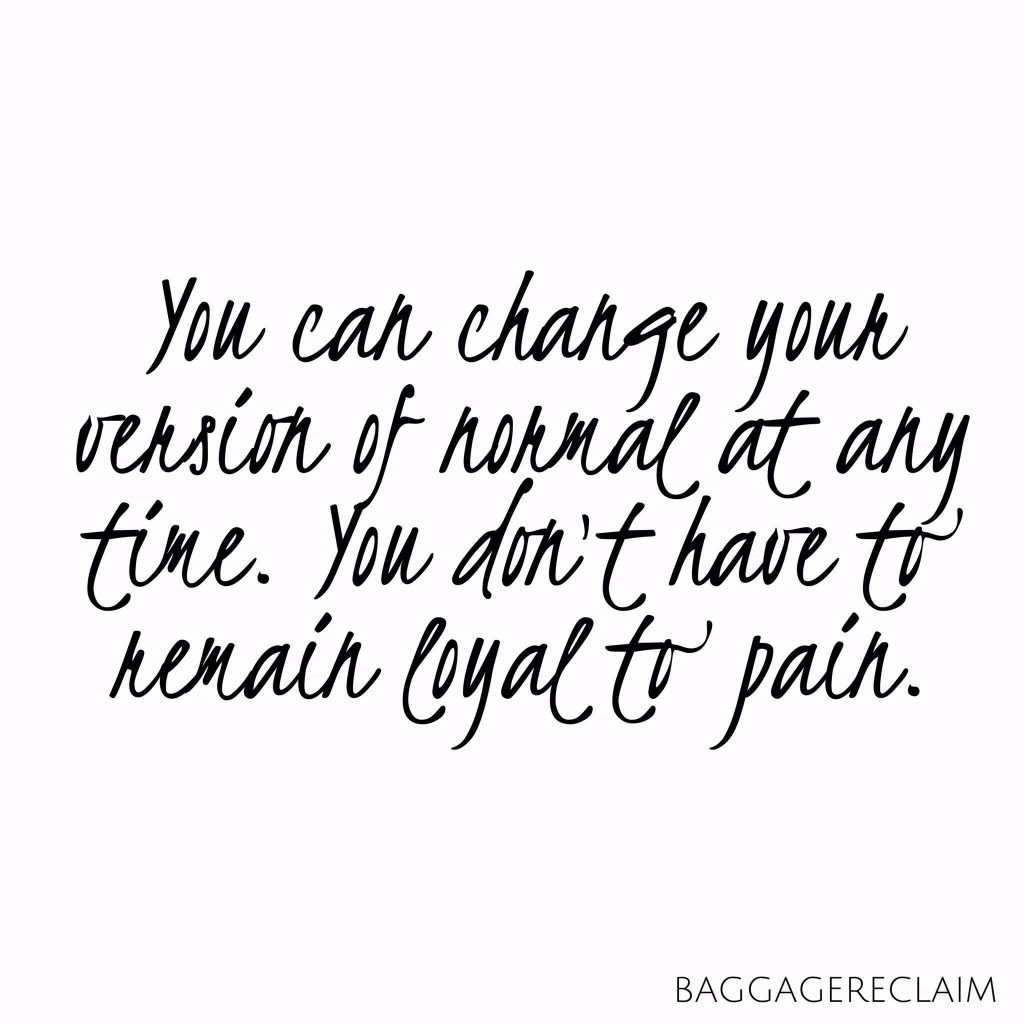 When you’ve witnessed or been through a lot of stuff as a child, a chunk of adulthood is spent trying to work out what’s normal because it quickly becomes apparent that what was ‘normal’ to you isn’t how things are in general or what you want to continue with, especially as you’ll be feeling the pain of putting your pattern on repeat.

Normalising what may be really poor behaviour and dynamics only really equips you for abusive and dysfunctional relationships. It trains you to be a pleaser devoted to trying to influence people’s feelings and behaviour while also trying to minimise conflict, criticism, disappointment, rejection, and abandonment. It trains you to stay when you should run, and to run even when there’s an imagined threat.

One teen summer while camping in Brittas Bay (I was raised in Dublin, Ireland), I witnessed a woman being beaten by her husband. Even though my friend and I were scared, we stayed until he took his hands off her and backed off. I know a lot of women who ‘walked into doors’.

I was a kid who walked into doors. I went to school with bruises and was terrified to go home around report time, begging and pleading with teachers to amend a grade that I thought would result in severe punishment. I was raised during a time when unless you were turning up almost dead at school, no one was going to say anything or investigate issues.

The funny thing is that when you don’t talk about this stuff, you can feel ashamed and even crazy but talk to people and you will find kindred spirits who understand your experiences. Sat with a friend a few months ago, we found ourselves weeping laughing at the absurdity of parents who go batshit on your birthday, cuss you out, scare the crap out of you, and then the doorbell goes and it’s your friends and your parents are like “Hi!” and going into Crystal Carryington hostess with the mostess mode while you’re thinking, Erm, did that just really happen?

Over the years I’ve met and corresponded with many people who had similar childhood experiences and a very confusing aspect of being physically punished as well as getting what may have been verbal tirades and/or mind effery, is that it teaches conflicting messages when you have good times and you’re hugged afterwards or they seem really remorseful, or they even say that they wouldn’t have ‘had’ to do what they’d done “if only” you hadn’t done whatever it was.

The trouble is that if you internalised this reasoning and took it as fact, normal, and guidance and direction on what you need to be and do to get by in this world, you will find yourself putting the past on repeat in some way.

One day you will wake up in an abusive relationship that’s suddenly crept up on you or find that you have no voice in your life because you’re always scared.

You may repeat their [your parents/caregivers] behaviour or you may engage with partners who are similar and when there are ‘good times’, or they hug you afterwards or swear up and down how terribly sorry they are, or even blame you, it will feel normal. It will on some level feel like an opportunity to right the wrongs of the past. The people pleaser within will be activated.

If you look at anything where you find you accepting below par behaviour and situations, look for the parallel situation from an earlier part in your life where you picked up the message that this is how things go.

For instance, looking back, it’s easy to see why it would take quite a while for it to dawn that the various Mr unavailables I dated were all shirt, no trousers as well as why I was easily wooed with words – my father has been telling me how much he loves and cares about me while either not being around or not demonstrating it when he was, that I learned that a man, a person in fact, does not need to be around or actually do anything in order for them to love me or me them.

Thats why so many people get caught out by Mr and Miss Unavailables – they think and talk about feelings that are seen as the ‘connection’ rather than having supporting evidence in the actions and relationship.

I learned about the power of a phone call after a long absence and how it’s best not to rock the boat by ‘bringing up old sh*t* like where the hell they’ve been for X months or years, plus how it’s best to stay out of a person’s way when they’re tense and agitated but won’t say why and that I should use the time to figure out what I can do to make it better.

I learned that there are ‘reasons’ why people say that they couldn’t step up or why they abandoned you, and that you should just take these even if they sound hollow. I learned that a person talking about their intentions and regrets, even if they don’t live with intention and in fact keep repeating the very things that they say that they regret, should be taken as a downpayment on a debt that they’re never going to repay but that they’ll keep making out as if they’re going to pay you back to keep you sweet. You give them more time, attention, affection and devotion thinking that you’re going to get a big return on investment one day.

When we really start to think about why something that causes us pain and keeps us stuck in a disappointment cycle seems so familiar and normal, it’s because it’s what we’ve learned over time. And once we really start to think about this and make the connection with the experiences, observations and teachings, we start the process of waking up and being conscious, and that’s a crucial first step in working on breaking a toxic pattern.

An eyeopener for me was distinguishing between my parents and romantic partners/ everyone else. When we in effect keep our child role, we overempathise and project the past into the present and so end up rationalising, denying and minimising unacceptable behaviour to make it normal while giving away our power. I can empathise with my parents and recognise what contributed to their habits both as individuals and as parents. I can empathise with others but they’re not my parents so there is no need for me to give up my power as a grown-up. This has been a hard but valuable lesson to learn – as time goes on, the more you practice the habit of not accepting the unacceptable and not slipping into a child role, the more you find your own normal.

When you keep trying to right the wrongs of your past, you eventually figure out that none of these people can give you what you’ve been looking for and that particularly if you keep trying to be the solution to their problems via pleasing, fixing, healing and helping, that you can’t give them what they want either, certainly not without crippling loss of self.

In life, there are going to be people who insist that their version of normal which involves busting up your boundaries and imposing themselves upon you, is normal. They’re just trying to make you fit into their world because it’s easier – they can feel safe and in control because if you comply, it makes you malleable. Abuse and basically anything that takes your away your ability to treat you with love, care, trust, and respect, is never ‘normal’ or acceptable. You cannot live your life in fear.

You have to decide what’s permissable and acceptable to you and there you will encounter people who can’t take your normal; that’s okay. They can jog along. It’s not your job to try to raise them from the ground up. Learning to recognise unhealthy behaviour and dynamics is crucial for giving you confidence in your internal compass and the biggest indicator is familiarity. If it feels like home and home was a source of turmoil, pain, confusion, and plummeting self-esteem, take it as your code red alert to wake up and get conscious about the choices you’re making.

Telling people what we think they want to hear leads to resentment on all sides
Excerpt from The No Contact Rule: Getting Trapped By Your Own Feelings
Stop Trading Yourself Down