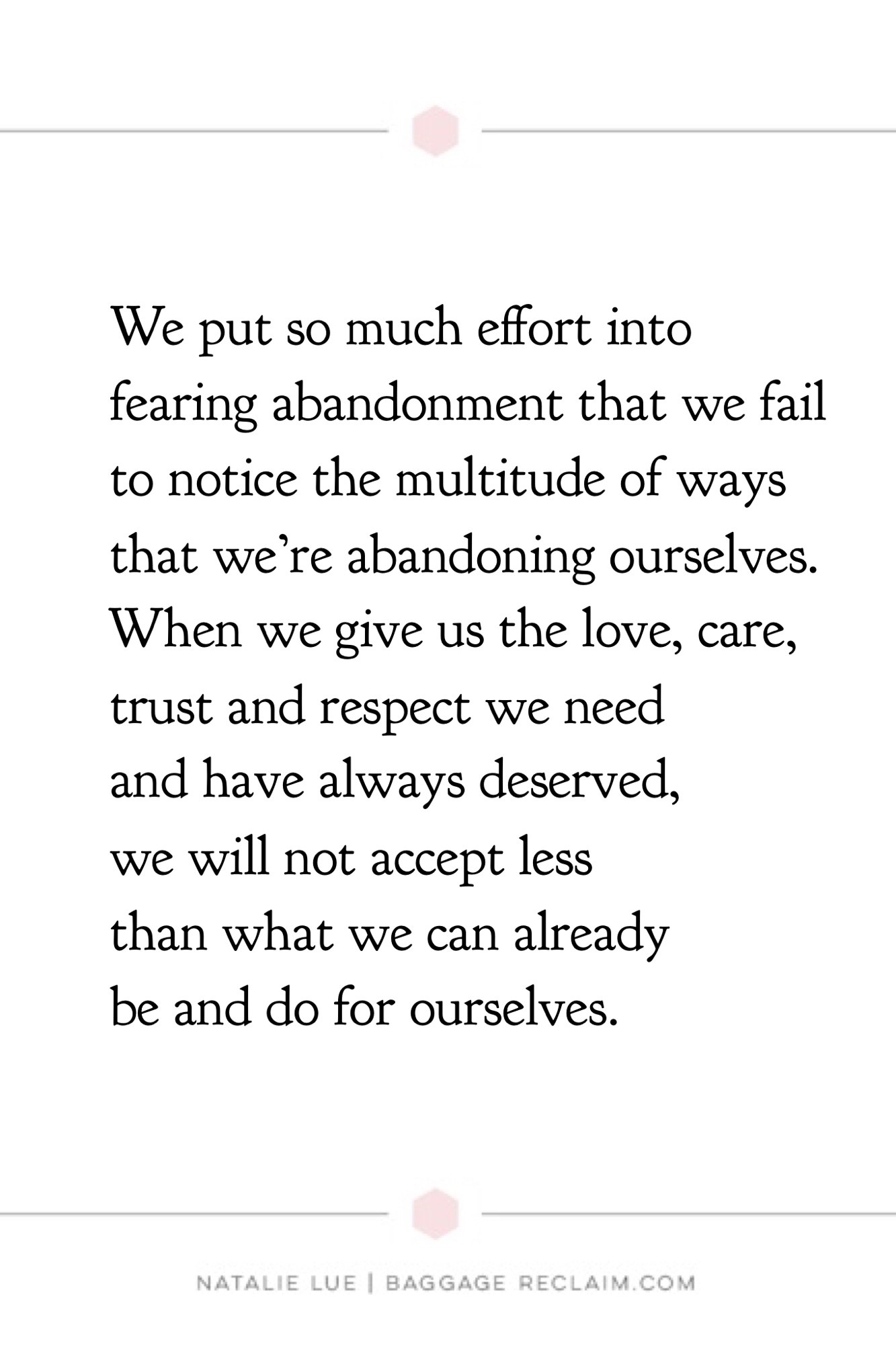 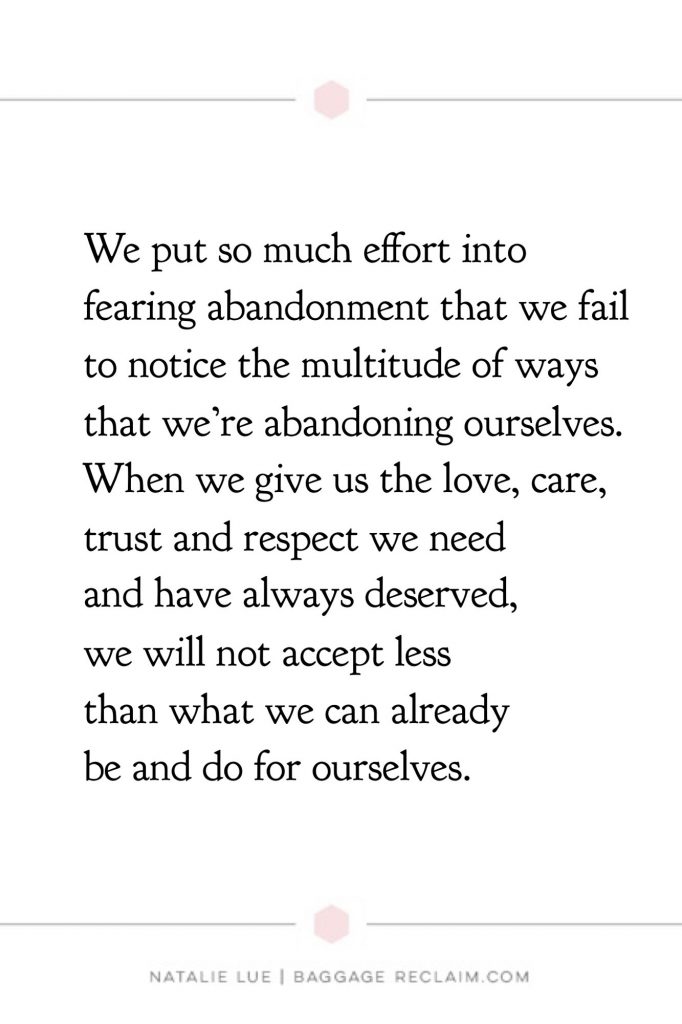 When I was a little girl, I developed a fear of abandonment because unbeknownst to my father, I perceived him and my parents not being together and him not visiting me when I spent a month in hospital as abandonment. This fear resurfaced later in life when the honeymoon period in my relationships came to an end. At the first whiff of potential conflict or I realised that things were less than the fantasy, I also assumed that abandonment was in the offing.

Beneath my seemingly confident exterior, I didn’t like or love myself all that much, so I was also convinced that discovery of my ‘flaws’ would justify abandonment. When I thought they were ‘too into me’, I’d act difficult because it was ‘safer’–I could manage down their expectations and protect myself from too much disappointment.

Ironically, in my efforts to avoid/limit abandonment and rejection, I always engaged in romantic relationships that offered the least likely prospect of commitment, and that were likely to bring out those feelings of abandonment in me anyway.

The strange thing: Until I realised that I had a penchant for Mr Unavailables and discovered my own emotional unavailability and contradictory behaviour that was counterproductive to forging a healthy, committed relationship, I didn’t consciously believe that I had abandonment issues. To be fair, if you’ve always felt and thought in a certain way, it’s your normal.

In my book Mr Unavailable and the Fallback Girl as well as here on the blog, I’ve stressed that we subconsciously (and sometimes consciously) choose people that reflect what we believe about love, relationships, and ourselves. It’s a self-fulfilling prophecy.

When we have negative beliefs (treated as true even if they’re not), we act in accordance with those beliefs and end up creating a self-fulfilling prophecy that ends up confirming the very things that we believe.

Fear of abandonment means being afraid of letting someone get close enough to you (intimacy) that it would hurt if they were to leave or reject you. It’s also about the fear of the consequences of conflict because you will be afraid that conflict will result in you realising your fear of abandonment.

Despite fear of abandonment though, you go ahead and attempt to forge relationships because you’re seeking validation–confirmation that something is true.

You, on one hand, attempt to challenge your beliefs and confirm that you’re good enough, but on the other, you’re inadvertently seeking proof that your fear of abandonment is true. If you didn’t, there would no longer be a legitimate reason to keep believing the negative beliefs. You would have to change.

If you’re afraid of taking the risk, you’ll limit the opportunity to take the risk and rely on the ‘safe bet’.

By creating limited relationships with people that have a limited capacity, by that same token you limit the experience and in turn limit the pain that you’re trying to avoid or, at best, keep to a minimum.

With ‘limited hurt’, you’re not ‘stretching yourself and taking a risk and are instead opting for the ‘safe bet’. For instance, despite the pain of being the Other Woman, it still seemed ‘safer’ to bet on the fantasy of us being together, despite knowing deep down that it was futile. As a result, I wasn’t risking myself like I would have to with someone who was actually available. In fact, the ‘safe bet’ becomes ‘safe rejection’ as you expect it anyway!

The self-fulfilling prophecy is about predicting what you believe is likely to happen.

If you have negative beliefs, you’ll predict and act in line with those beliefs so that what you predict becomes a reality.

This prepares you for the eventual pain and loss that will no doubt ensue by choosing partners that tick the boxes for your beliefs and relationship pattern.

When you ‘act up’ or keep questioning whether they’re going to leave, it’s like sabotaging your relationship to bring about the prophecy of doom–they eventually end up leaving unless they’re extremely patient plus you recognise this and embrace them and deal with your own issues.

When you have hidden beliefs working overtime underneath in your subconscious, it’s amazing what you will do to keep believing– it’s familiar and comfortable pain. It’s suffering that keeps you connected to your past and blocks intimate relationships and the ability to be who you really are.

Despite my pain, because it was working with my beliefs, it was oddly familiar and comfortable, albeit the uncomfortable comfortable.

If you have a limited relationship with someone, especially any relationship that has a lot of illusions in it, they can’t ‘leave leave’ because there isn’t a real relationship to leave and there’s no real commitment. A lot of the pain that ensues is actually about how, when they leave (or we feel like they are or are going to), that any illusions that we had about them have to leave. We resist stepping into reality.

Fear of abandonment limits your capacity to love and be loved, resulting in you choosing limited experiences and limited people to make a limited contribution with so that you’re prevented from getting close enough that it will hurt to the fullest extent of your fears.

If you never really believed someone would stay or that you could hold onto them, you wouldn’t give yourself to the fullest anyway even if you convinced yourself that you were.

Unless you address your fear of abandonment, you will either live in fear that they’re going to leave, killing the relationship with insecurity anyway, choose people that are likely to leave and end up acting in sync with the drama with it ending in them leaving or, you will sabotage relationships that don’t look like they’re going to meet your prophecy because you don’t feel worthy of them.

Do you have a fear of abandonment? Have you chosen partners that offer the least likely prospect for commitment as a ‘safe bet’? Your thoughts?

It's Not A Waste - An excerpt from The No Contact Rule (2nd edition)
Reclaim You: 100 Tips For Dating With Your Self-Esteem In Tow
Take the focus off them and bring it back to you
Share this...