9 Tips For Complimenting A Woman 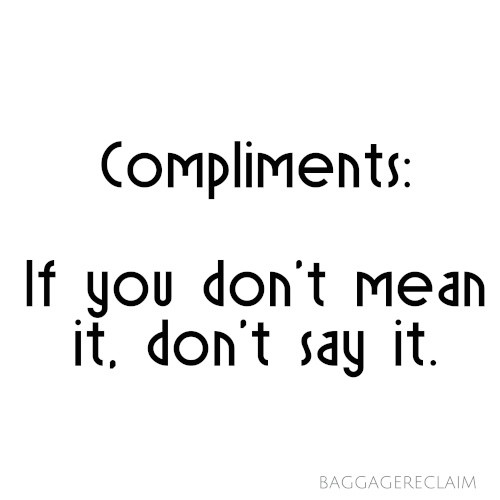 After hearing a story of how a guy approached a woman and complimented her on her “hourglass figure” and ended up with a very pissed off woman snapping at him and slapping him across the face, I wanted to share some suggestions for complimenting women with sincerity and that avoids getting off on the wrong footing. Laughter aside, while I think her reaction was a OTT, he also failed to recognise that sometimes, what you think is a great thing to say is a major no-no for the recipient.

1. Treat a compliment as a gift

A compliment is a polite expression of praise or admiration. (Source: Oxford English Dictionary) Authentic compliments are sincere and without a hidden agenda. This means that just because you compliment the person, it doesn’t mean that they owe you, for instance, reciprocal interest, their time or sex. Compliments fall into the giving category. If you’re being genuine in your compliment, it is aimed at letting that person know something that may make them feel quite good about themselves. If you wouldn’t give the compliment if you weren’t guaranteed that you’d get whatever it is that you hope to be rewarded with, either dial it down so that you don’t weight you with too much expectation or… don’t say it.

2. If they’re a stranger, it means you don’t know them.

Don’t be overfamiliar as a means of trying to ‘force ripen’ the situation so that you can legitimise saying and doing things that are more reflective of a longer relationship.

Saying someone is beautiful is better than homing in and saying ‘I love your Roman nose’ or anything else specific. You don’t know if the recipient of your compliment has spent her adult life fretting over that particular feature!

4. Start a conversation first if in doubt about going straight in for a compliment.

This gives you the opportunity to introduce yourself and you will be slightly less of a stranger than you would be if you just bowled straight in with a compliment. Unfortunately due to the nature of compliments, you can’t predict how a person will react. Some people have a negative association with compliments (so they feel suspicious or even turned off and assume you’re saying it to screw them over or just simply screw them), and some just don’t know how to take compliments because of their low self-esteem. As a result, even with the best and sincerest of intentions, you don’t know if the person is going to be flattered or turned off no matter how nice and genuine your compliment. An initial conversation can pave the way to your compliment coming across more sincerely and/or being received well.

There are a lot of guys out there that have a line that they trot out which is their charming and disarming line that they hope will eventually get the knickers down. While you may get away with trotting out a line to some women, many will see right through your cheesy, standard approach and feel very turned off. Most women can smell a bullshit line even if they pretend otherwise.

7. Look her in the eye when complimenting.

Don’t stare at her breasts or elsewhere.

8. Try to gauge your audience.

Is she on her own or with other people? Some people will think it’s strange if you come over and compliment them while they are with other people, and others may feel as if you’re invading their space. Likewise, if they are on their own, try not to approach in a creepy manner and don’t come too far into her personal space. I have a particular pet peeve with guys that literally try and stand right up against you when they approach.

I repeat! Do not touch and compliment. Touching a stranger and complimenting them at the same time doesn’t make your invasion of her personal space any better. It’s creepy, it’s inappropriate, and downright overfamiliar. Keep your meddling hands to yourself!