The Big Question: Will he try to get in contact with me?

I’m a huge advocate for using the No Contact Rule on men (and women) that just seem to have an allergy to breaking up and making a clean break. Even when you don’t have to get medieval on him and cut contact, I’ve said it before, and I’ll say it a million times again: this whole staying in touch and trying to be friends after you’ve broken up is bullshit. Just ask the millions of women out there that are secretly hoping for him to suddenly see them for the great women they are so they can have their fairytale ending. In reality, they’re being used for a shag and/or an ego stroke.

But…Fallback Girls and assclown lovers are obsessed with the big question: Will he try to get in contact with me?

Now, like a lot of things in shady relationships, obsessing over the “What ifs” of this question is a reflection of Women Who Talk and Think Too Much syndrome and not seeing the wood for the trees.

What we consider is what we believe a man getting back in touch means: He wants me/He wants to get back together/He misses me/He regrets his actions.

To add insult to injury, Mr Unavailables and assclowns are lazy. They may not even call; they might skip straight to text, instant messenger or email! If you fall into the trap of believing that his actions mean way more than they actually do, you’re so excited about him getting in touch and back into betting on potential mode, that you fail to see his actions for what they are.

But let’s answer the big question: Will he try to get in contact with you?

It depends on the circumstances. It may not be today, it may not be tomorrow, it may not even be this year or even twenty years. If he’s of the Mr Unavailable and assclown variety and hasn’t seen the error of his ways, his overblown ego, total disconnect and often selfish, using ways, means that he’s likely to make contact at some point.

Whether or not he gets in touch depends a great deal on you. You are in the driving seat of this way more than you realise. 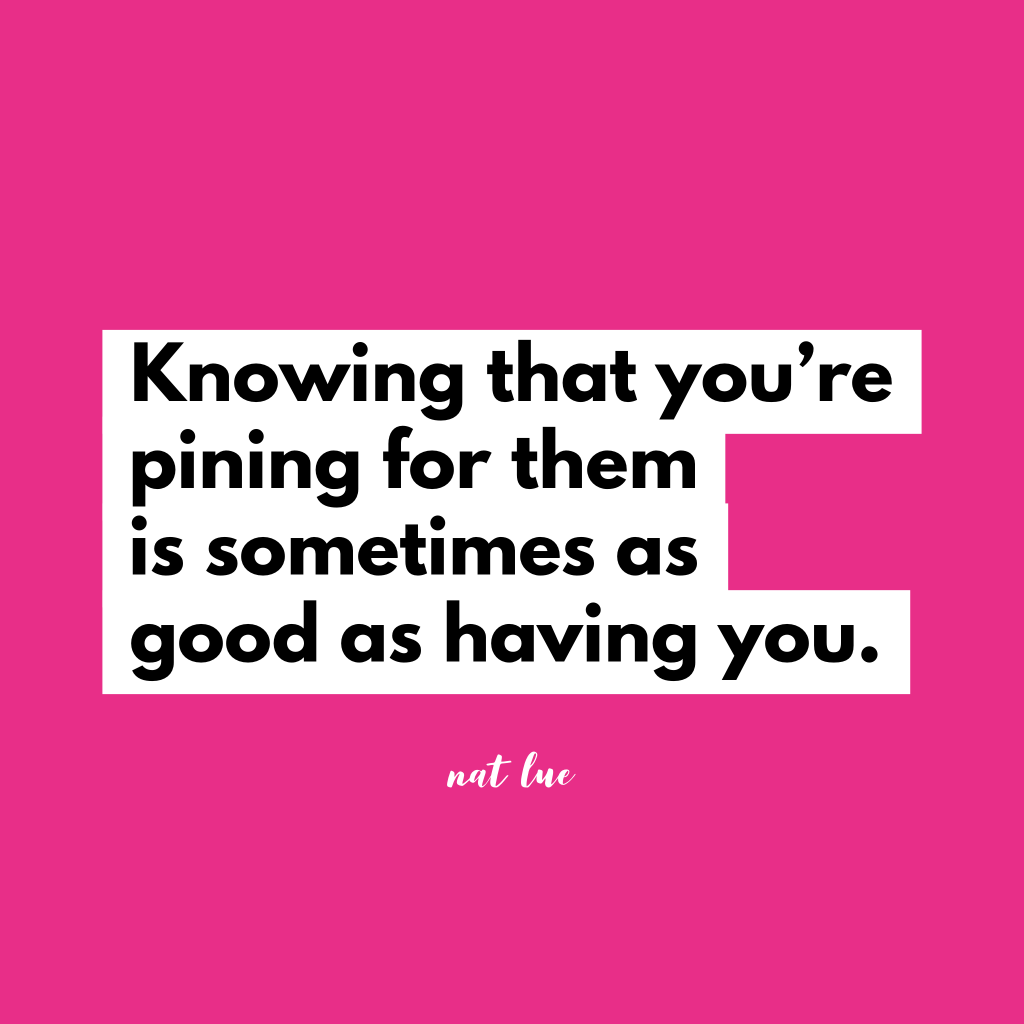 Had the brass balls to see him for what he is and tell him to jog on. This means he’s likely to resist or be hesitant about making a comeback. If he does try, it’s probably for an ego stroke or a shag. Or to try to get back in control… and then disappear.

Held on to his feet begging him to stay. He’ll probably get in touch for a shag and an ego stroke. However, if it was intense, he’ll probably make you wait a while as he may be nervous about your emotions.

Keep making contact with him. Or, you make a big point of reiterating how you don’t want to lose him and how you want to stay in touch. He’ll probably be in touch. Highly likely to be for a shag and/or ego stroke. However, depending on how shady or egotistical he is, he might not feel the need to reach out, yet.

When someone knows how badly you want them, sometimes it’s as good as having you.

Hang about on the fringes, sending smoke signals that you’re ready and waiting. He will make contact as and when he needs you. You will possibly become part of a narcissistic harem.

Tell him you don’t give a shit about him. If he’s from the egotistical stable, he’s likely to want to prove you wrong. And some will bide their time. Now, odds are, if you’re wondering if he’ll get in touch, then you give way more of a shit than you’re letting on!

Appear to have moved on or seem as if you might be getting over him. He’ll probably get back in touch. It’s as if these guys have a homing device that senses when we’re moving on! Or, another explanation is that Professor Life throws you a pop test in the form of him reappearing. Your task is to say no and keep moving on.

Avoided him for longer than any previous breakup. He’ll probably get in touch because he doesn’t like to be out of control of you being emotionally invested in him. On some level, he has an idea of when he thinks he can reach out. He might wait for a while after the longest period has been exceeded. And then ego will get the better of him. So, if the longest you’ve gone in a year, curiosity is likely to get the better of him by, for example,rel 18 months.

Worked his way through his narcissistic harem of women and hit a blank wall. He’ll probably chance his arm with you.

Dumped by the one he left you for, or he finds himself being rejected by someone else. He’ll probably try it on with good ‘ole familiar you.

Caught a clarity glimpse in the mirror and realises that he hasn’t still got “the magic”. He’ll probably get in touch and try to get back together so that he can feel like himself again.

In a nutshell: If you give any hint whatsoever that you are still interested in him (and for many of you, that will come down to giving him the time of day), he will get in touch. And it will probably be when he needs something. And, no, he won’t admit that.

But…the fact that it could be any time between now and infinity is all the more reason why you shouldn’t be sitting at home pining away for him! Don’t wait. It may not ever happen.

Yes many of them do get in touch, but many don’t! Why? Because they have no need for you and they’re getting a shag and an ego stroke elsewhere.

If they’ve moved on, messing up your life isn’t high on their priorities right now. It’s only the most egotistical, pathetic, lying, cheats that like to keep you on ice after they’ve moved on with someone else. Next thing you know, you’re in the relegation zone and demoted from girlfriend to ex, to the Other Woman. Don’t take a demotion, ever!

“But, why do they get in touch with us then?” some of you might wonder.

To test to see if the proverbial door is still open. That may mean your legs or your emotions, or a combination of the two.

The only way that men who don’t know how to get the hell out of your life and leave you to move on, know that you are over them, is to be greeted with a closed door. Repeatedly.

Eventually, they get bored. It will be very annoying and if you’re not quite over him, a test of your willpower. But they do get the hint eventually, especially if you’ve actually moved on.

The worst kinds of men like Mr Unavailables and assclowns are ego and… often penis driven. The dick knows not why it wants it, just that it wants to get laid in some familiar territory… and then hotfoot it back out of your life the moment that they think you want, need, or expect something from them!

They like knowing that there is at least one woman out there that is foolish enough to keep taking them back even though they bring less and less to the table each time. And they don’t even muster up the energy to attempt to be sincere anymore!

Remember, if we as women are afraid to be on our own, we have to entertain the very real possibility that there are men out there that also don’t like to be alone.

What you need to be asking yourself when you’re wondering whether he’ll call and trying to calculate when is:

Why the frick do I care?

Then ask yourself why you need to concern yourself about whether a man who doesn’t want you and who didn’t treat you right is going to call?

Remember that from the moment that someone breaks up with you, a major signal needs to be going to your brain that you and this person are not on the same page. Rather than value you and do everything in their power to make the relationship work, they would rather opt out.

They are out. If you’re still ‘in’, something’s wrong. 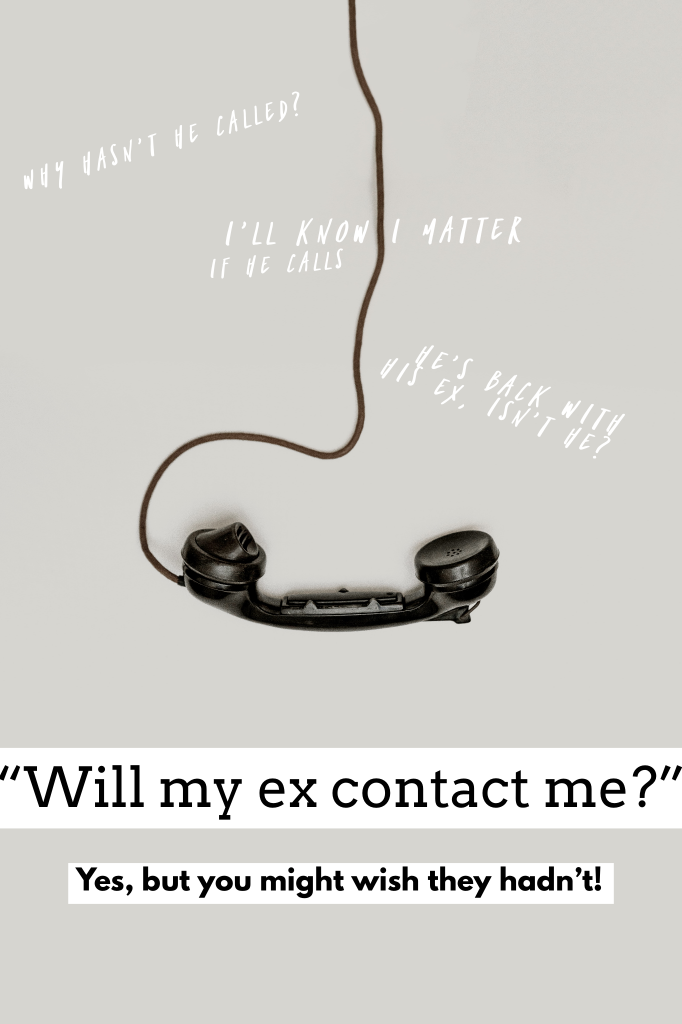 You cannot spend your time trying to out-think these guys and pre-empt their moves. For a start, obsessing and thinking about what they may or may not do are signs that you are not moving on. You’re still heavily emotionally invested, and in essence, conducting your relationship with him in your imagination.

You know that you are grieving, healing, and moving on when you’re not throwing away your time priming yourself for a possible contact that may or may not happen. Talk about setting yourself up for disappointment! Be so busy getting on with your life that you can’t be on tenterhooks for this guy!

This is not the movies or a fairy tale! I hate to be a parade killer, but having two star-crossed lovers that have an obstacle crop up at just the right moment to push them apart, for it to be resolved in 90 minutes just isn’t real life.

Men that want you don’t tell you that they don’t want you!

We make too many excuses for men. We let them off the hook, and we’re hearing, but we’re not listening. One way or another, the guy is showing or telling you which way the land really lies, but you just don’t want to see or hear it.

The key to all of this is what happens after he gets back in contact.

You know what the contact meant by what happened afterwards. It’s not the contact, it’s what he does with it and what happens afterwards that counts. I suspect if you’re a Baggage Reclaim reader, it didn’t work out too well…

So, instead of asking, “Will he try to get in touch with me?” Ask yourself “Is the door going to be open for me to receive his contact?”

Knowing If You Feel Good In New Relationships Part Two
Stop Obsessing over How Men Communicate
I’m Not That Woman. An Ode For Every Woman Who Has Loved, Lost, and Forgotten Her Value
Share this...