When someone blanks you / disappears & then reappears to ask a favour of you, it’s OK to say no 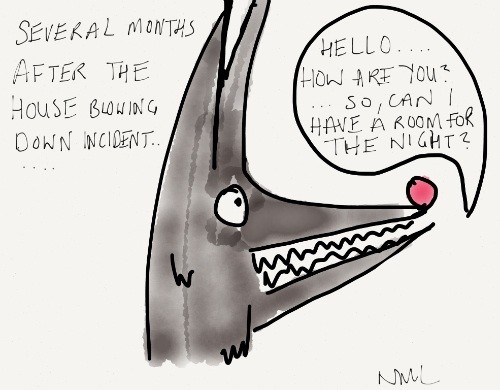 Something that many people, especially those with people-pleasing inclinations struggle with, is what to do when someone who disappeared reappears to ask a favour of you. They want support, help, kindness and basically generosity beyond what they’re due and what the normal run of things is. After weeks, months or even years, this person pops up, possibly with an apology and explanation, possibly not, and then asks for help, money, a place to stay, an alibi, sex or whatever. Of course, it’s not what they’re due or entitled to, and it’s outside of the norm.

Normally if someone has vanished into thin air or has stopped talking to or is even mad at a person, a favour shouldn’t factor in there.

I’ve been in this situation enough times to know that when somebody suddenly conveniently reappears in your life just as they also happen to need something from you, there’s a pervasive air of ambiguity and awkwardness.

If neither of you says anything about the silence, the absence or their possible prior anger, you end up feeling worried about looking like you’re bringing up old shit / being rude. Or, you worry that you’ve missed the window of opportunity to say something, and so feel compelled to play nicely-nice while they chat to you with faux cheeriness mixed with edge due to them knowing that they need to find an opening to make the ask. There’s a part of you that’s thinking that surely they’re going to say something, after all, there’s no way that you would have the brass nuts to just breeze on up as if nothing happened. Maybe there’s some awkward pauses and you think, It’s coming! They’re gonna say something…. And….nope…

Some people don’t really know how to make amends or to address issues, so they just hope that their absence takes care of it, and that given enough time, they can just act like nothing happened.

I was talking with a friend recently about how family can drive you batty with this kind of carry-on. “We’re family (said in my best Peggy Mitchell from Eastenders voice). If I wanna cuss you down, blank you, have a ridiculous argument with you and then never speak about it again, and expect you to act like nothing happened, I can. We’re family!” Of course we’re people with feelings and memories that can’t just be switched off. We might even be adults who like to actually attempt to address things in a mature fashion.

In some cases, it’s a matter of the person relying on the fact they’ve ‘come back’ and the attendant awkwardness to tap into your need to please. If you don’t tend to make waves and are near to chomping at the bit to have them back in your life and to get their validation, the awkwardness is an advantage to them. This is especially so if you have issues with saying no or “Let me get back to you.”

Each time I hear stories about that time that certain someone that disappeared/cut you off/went off in a strop and then suddenly reappeared with their hand out looking for something, there’s often a temptation to say yes out of fear of looking rude or like grudges are being clung to. There’s also fear of scaring the person away.

Be careful of mistaking being used for being needed.

What we have to be careful of is saying yes due to believing that in doing so, we’re going to experience some form of reward. If we want to give because we have it and it’s reasonable to do so, plus we’re not going to be offended if we don’t get similar or more back, great. If not, halt.

Often though, these situations can be seen as an opportunity to decline and give a major explanation. And possibly tell them all about themselves. Sometimes we do this because we don’t think that ”no” is sufficient. It’s as if we have to have a big reason and a showcase of the issue to legitimise the no.

We also seize the opportunity because we may not be sure when another will come round and we’re looking for some sort of validation.

We may still feel hurt and angry and are maybe hoping that they will feel small like we have felt during their absence. It’s best not to go down this road though because it only feels good in the moment and a no with on topic (address the specific request instead of bringing up everything but the kitchen sink) and brief reason (if needed) is more than sufficient. They didn’t just fall out of the sky as a fully formed adult – they know why we’re saying no!

The big explanation and possible telling them all about themselves session may be tempting but the clouds won’t part and the angels aren’t going to start singing a big apologetic musical number.

These situations are particularly hard with family or people who you’ve been so ridiculously generous and accommodating with in the past, that they have no sense of the natural consequences that they would experience with someone else. They may feel entitled to your help without explanation or respect of your boundaries, or they are used to coasting on good intentions and crossing the bridge of reality when they get to it. They may even be very charming and convincing. You may feel as if you’re leaving them in the lurch, which when you eventually put it into the context of how they treat you, their absences, and what amounts to one-way traffic, can suddenly seem ridiculous.

It is important to ask yourself, ‘Why me?’ (where are all the other people they’ve been around during their absence) and it’s just as important to evaluate your feelings and thoughts on the situation. If you feel guilty and obliged, why? If you’re worried about awkwardness, why? If anybody should be concerning themselves with that in this situation, it’s certainly not you. What are you worried will happen if you say no? What are you hoping will happen if you say yes? It’s also a good time to evaluate when this person is nice to you or returns to your life – is it always around the time that they need something from you?

Most importantly, does you saying yes to whatever they’re requesting/expecting in spite of their absence / treatment, amount to you saying yes to pressing the Reset Button and mistreating you in the process? If so, say no. Trust me, you’re not the only person that they can ask.

Don't let pursuit of trying to get somebody to do the right thing, blind you to doing the right thin...
Advice Wednesday #6: My Husband's Adult Children Keep Rejecting Me & He Took Off His Ring To Appease...
Why some people call you “needy” even when it’s the first time you’re speaking up