Miss You, Miss You, Oops, But I’m Not Getting Back With You: When Your Ex Says They Miss You But You’re Still Broken Up 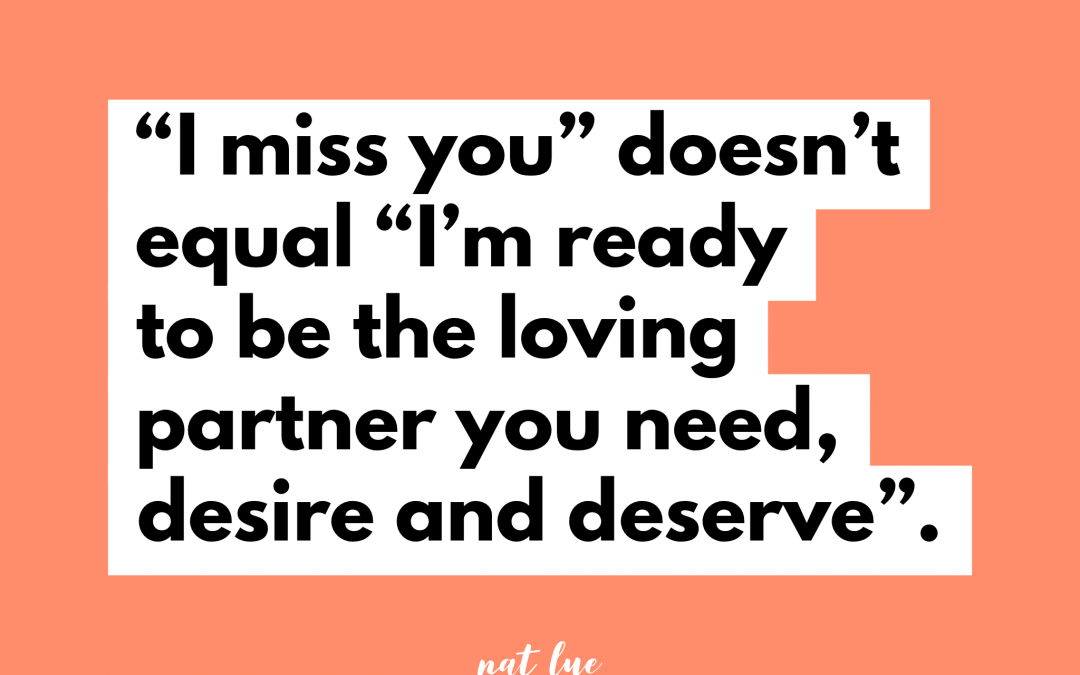 I regularly hear from people who are in the rather uncomfortable and ambiguous position of having an ex that they still love (or think they do), claim that they miss them and/or that they wish they could be together. However, these exes haven’t left their current partner or are unwilling to address the issues that broke the relationship. In some instances, these exes claim to miss him/her but aren’t making any moves or suggestions towards getting back together.

The reality is somewhat altogether different: The obstacle isn’t whatever excuse they’ve given. Your ex is the obstacle.

Someone can miss you but not actually want to get back together.

They may think you’re great, claim to be crazy about you, or miss the things that ensured they got their needs met, but they don’t miss you that much. They like their life, and even if you don’t ‘get’ it or think it’s wrong, their situation works for them.

Someone can miss you but have enough awareness about their own capabilities to know that nothing would actually change if you were to get back together.

Someone can miss you because they get to avoid dealing with someone or something much closer to home. Dodging being emotionally available and of course, being uncommitted through their actions.

Someone can miss you, but it may not be for the reasons that you think. It may be for an ego stroke, shag, shoulder to lean on, money or whatever floats their boat.

People who say they miss you but don’t back up the sentiment with real action are talking hot air. They’re being non-committal. If this is how they were in the relationship, this “I miss you” BS is just an extension of the all-talk-and-little-or-no-action issue.

The mistake that we often make is assuming that they miss us or that they want to get back together because they:

2) Are looking for a shag

3) Moan about their ex

4) Tap us up for an ego stroke

5) Poke around in our business

7) Ask hypothetical questions about what we would do if they made themselves available. Then they swiftly follow up with noise about how they can’t do anything at the moment but ‘might’ in the future.

Ultimately, what this head-wrecking boils down to is this:

If your ex misses you that much, they will handle their situation so they can be with you, period. Anything else is them talking doo-doo.

Think about it logically: Let’s imagine you hear from someone for a few months to a year or even more.

But ask yourself this:

Why, if you miss me so much, are you ensuring that you stay in a position of missing me but never actually doing anything about it?

Why continue with your merry little life or even your merry little relationship, while muggins here (yes, that would be me), puts my life on hold on the possibility that you might actually do something about it one day?

If you are not in reality about who you were involved with and the reasons for the breakup, and are still looking for validation, such as wanting them to crawl back on their proverbial hands and knees and say how crazy they were to leave you to be with someone else (or whatever it was), you will be receptive to your ex’s bleating.

What isn’t acknowledged is that You.Broke.Up! You are a valuable individual entity.

The least they can do is miss you.

But stop enabling their sense of entitlement by allowing them to enjoy so much access to you.

What’s all the more galling is the chief offenders of this type of behaviour are often involved with other people. It doesn’t matter what you think of their current partner. It’s disrespectful to a current relationship for your ex to creep around telling you that they miss you.

For you, the eager beaver listener, keep your ego and your boundaries in check. It may feel like sweet retribution that they appear to be coming back and that you seemingly have the upper hand, but this isn’t a win.

You need more than an ego stroke and empty promises. They are moving on with their life while using you as an emotional airbag to cushion the transition. They’re securing a very comfortable fallback position should things ever not work out.

Surely you are worth being more than someone’s emotional airbag and their backup plan?

Put a golden boundary in place: Never allow someone to hang around in your life claiming they miss you while disrespecting another relationship.

It doesn’t matter what their reasoning is. What they’ll do to others, they’ll very comfortably do to you. Don’t bother taking the high road of “Well they were mine first” because it opens you up to petty reasoning. That and unless you fell out the sky into this year and they have no prior history before you, someone else could easily come along and have that same attitude.

The more you listen, the more sandcastles you build in the sky, the greater the illusionary relationship that you create. You end up in No Man’s Land, and basically, you don’t move on.

Do you know what’s so horrible about this situation? The more airtime you give it, the more you delay the inevitable process of grieving the loss of the relationship. When it all goes tits up, and you finally accept that the relationship is over, it hurts that you put your life on hold. You feel wounded by your willingness to believe in them and, yes, angry with you for being afraid to let go.

And, no matter how annoying and even manipulative your ex’s behaviour might be, if you put your life on hold and that includes in the physical day-to-day and the emotional, you need to own this.

Don’t own their behaviour; own yours.

That means being honest with you about what listening to them has allowed you to avoid. It means acknowledging any fear and resistance you had about taking responsibility for your happiness.

You have a responsibility to yourself to assess the risk and act in your best interests, even if the reality of something involves making uncomfortable decisions. Yes, they should be aware that they’re playing around with your time, energy, effort and emotions, but actually, you should be even more aware of it.

You’ve always had the option to pay attention, weigh the information, and opt out.

You might say “Oh, well, I was afraid if I didn’t give him/her attention that they might think I wasn’t interested or they wouldn’t leave their partner”. That’s not a good reason to not have your back. If them stepping up to the plate is dependent on you putting your life on hold and not acting with love, care, trust, and respect for yourself, this whole thing is doomed anyway. If they can only leave their partner if they have someone on ice, the relationship is also doomed.

When someone claims that they miss you (whether they’re with someone or not) and you’re thinking about getting back together, slow your roll and say:

You know what? I miss you too. But let’s not have this conversation unless you’re prepared to convert that sentiment into action and get back together.

Or the not so polite version: Come back when you’ve got your shit together/are not creeping around behind his/her back. 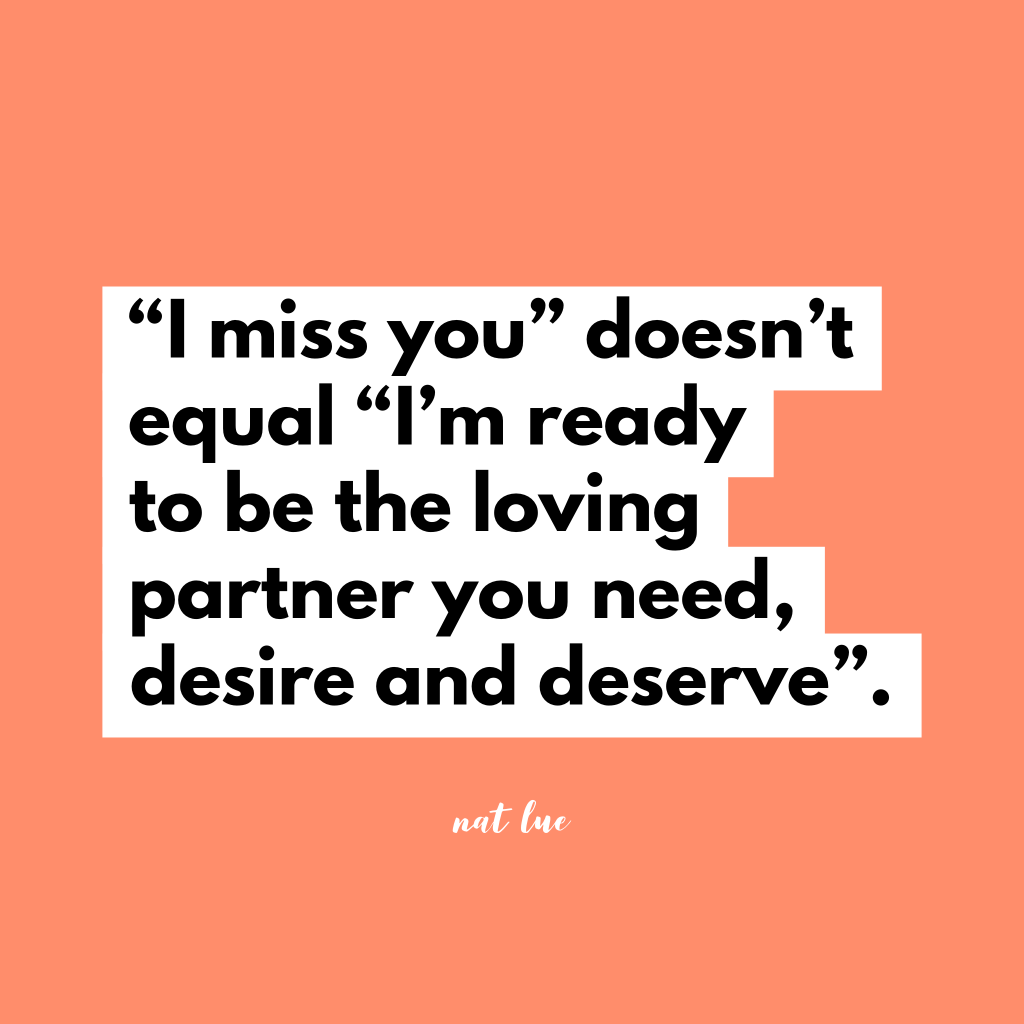 And make sure when you miss them, as in the reality of them, not the person you thought they were or hoped they might become.

And asking why they tell you they miss you is like asking “How long is a piece of string?”

In short: It’s because they can.

We’re not all responsible with words. Many people are out of touch with their emotions. They don’t know, acknowledge and express them. So many people (and that might include you) assume that feeling out of control and wanting to get back in control equals missing someone. It doesn’t. It means wanting to control the uncontrollable.

One of the questions I regularly ask clients in these situations: Do you truly want to get back together or do you want to win?

The biggest fear that someone who claims to miss you has is fear of not having you as an option anymore. And yours? Fear of no longer being an option. But remember, don’t sell yourself short. There are better ways to feel needed and valued than being your ex’s In Case of Emergency.

People who genuinely want to be with you don’t resist being with you. Your ex needs to stop missing you and be with you, or…jog on.

Guest Post: Mr Unavailable - When a Woman Won't Heed The Signs
Relationship Advice: How can I keep up the no contact rule with my guy at work?
When Mr Unavailables and Assclowns Drip-feed You Info Part Three