30 Signs That Someone Isn’t Interested Or Is Half-Heartedly Interested In You: How To Avoid Being a Passing-Time Candidate 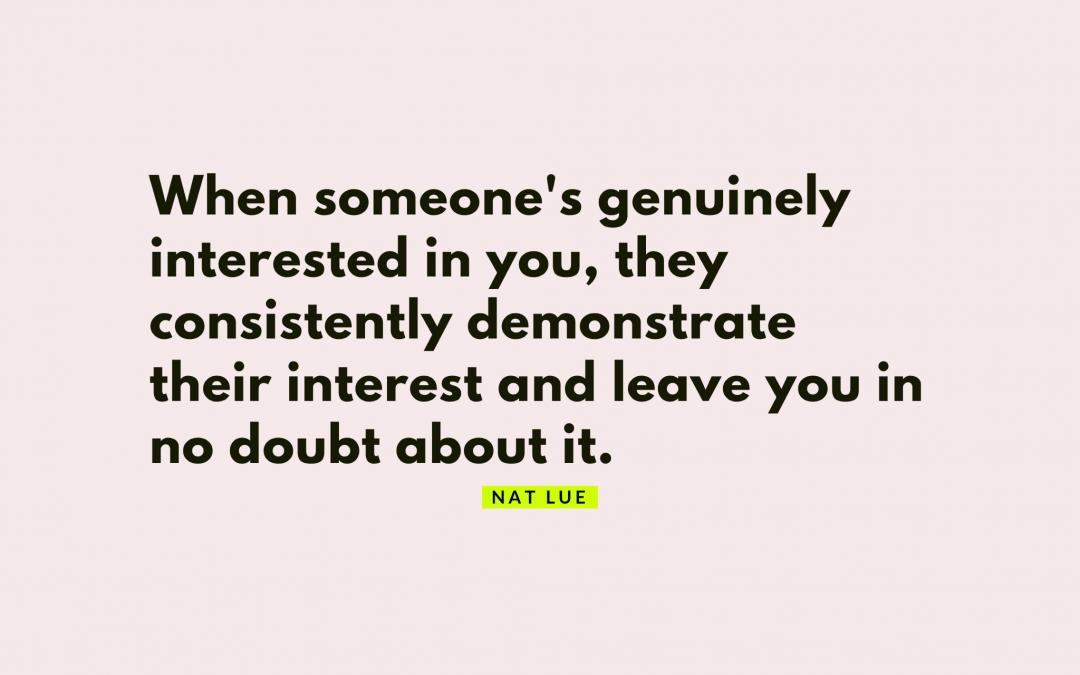 In the past, I made a lot of excuses for the behaviours of people that I was involved with, the anxiety that I felt with them, and my continued investment. Over the years of writing this blog, I’ve read thousands of comments and emails where we make excuses, rationalise shady stuff, ignore red flags and our own needs, and basically linger or even stay rammed stuck in relationships long beyond their ‘use by date’. We ignore what are often blatant signs of disinterest.

This is all on the basis of a couple of things: they’re still ‘there’ in some capacity and we assume they have ‘some’ interest that can be made into ‘more’.

Cue trying to prove ourselves, seeking validation and attempting to avoid rejection. One of the things that we must do, and by we, I mean both men and women because these issues affect everyone, is recognise when someone is not interested or is ‘vanilla’ in their interest.

The key really isn’t to get into splitting hairs about what level of interest they have, because it all boils down to that they’re either in or they’re out, and they’re either treating you decently, or they’re not. If any of the following signs of disinterest are in your relationship, I’d take a parachute and jump because all 30 of these either on their own or joined up with others make for an unhealthy partnering. You deserve better. Don’t sell yourself short.

Recognise signs of disinterest so that you don’t allow someone to ‘pass time’ with you.

2. They may not even bother speaking with you and rely predominantly on emails, text messages, and instant messenger.

4. They don’t want to put both of their feet in and commit. They’d like you to ‘go with the flow’ even if there is nothing flowing, and to expect nothing beyond this.

5. The relationship doesn’t progress. It goes in fits and starts, stalls, or goes into reverse.

6. They’re keeping you a secret.

7. They tend to be around/call you up when they want something. It might be money, attention, an ego stroke, sex, being an armchair psychologist–something. If you think back to all the times when you’ve heard from them, you might notice that it was a preamble to something.

8. They leave it to the last minute/short notice to make plans. They may not even bother to make last-minute plans – they might just show up late at night expecting you to be around. Don’t be.

9. They create drama in the hope that you’ll take the hint that they’re not interested and end it, so that they can be let off the hook.

10. When you’re broken up with them, they get in touch, often in a lazy manner just to ensure that you still jump to their beat. In fact, take the fact that you’re not in a relationship with them as a major sign of disinterest. Don’t make the mistake of thinking that they got in touch because they want to get back together.

11. They’ll make a lot of noise when you attempt to move on with someone else and then when you ‘reciprocate’, they’re nowhere to be seen.

12. They send texts, emails, DMs, or leave voicemails, and when you no doubt eagerly respond, they either take ages to or don’t bother at all.

13. They don’t break up with their wife/husband/girlfriend/boyfriend. But they still expect to be with you. Hell, they seem to think you have all the time in the frickin’ world to be waiting around for them.

14. They don’t get that divorce finalised. In fact, they may even pretend they’ve started proceedings!

15. They keep blaming timing, the no 5 bus, work, their ex, their commitment issues, or whatever the excuse du jour is, for why they can’t be or do something. In fact, they keep making excuses.

16. They’re sporadic in their efforts, and you can often pin bursts of efforts to when you either told them to beat it or they felt in danger of losing you.

17. They keep changing their mind about their interest in you. Flip-flapper alert!

20. They sleep with other people while sleeping with you.

21. They only have a sexual interest in you.

22. It takes them weeks or even months to call you up after a date or taking your number.

23. You’re hanging out like friends. You may even be friends with benefits.

24. They disappear for periods of time.

25. They’re more interested in having things their way, on their terms, being right, and having the power.

26. They treat you without love, care, trust, and respect. Even if you don’t love one another yet, it shouldn’t stop them from being a respectful person with integrity that cares about their actions and those around them.

27. They treat everyone from the old lady down the street, to the postman, the dog and whoever else has no romantic expectations of them with decency, but when it comes to you, they’re an assclown.

28. They’re either Future Avoiders, afraid to talk about the future or make plans, or they’re Future Fakers, faking a future so they can get what they want in the present, because they know they won’t be around in the future, because they’re not genuinely interested.

29. They are controlling, manipulative, jealous and possessive. These are not signs that they’re actually interested in you; these are signs that they want to control you. This is not the same as love or as a result of love. A person who behaves in this way isn’t the type to have a balanced, respectful relationship, and may not even really want you but won’t want anyone else to have you either.

30. They’re so ‘busy’ that they have no time for the relationship. Nobody is that busy and when someone is genuinely interested they find the time.

These thirty signs indicate that they’re ‘just not that into you.‘ They’re also signs of emotional unavailability that are likely to also point to a frustrating and/or painful dating cycle.

When someone’s genuinely interested in you, they consistently demonstrate their interest and leave you in no doubt about it.

They and the relationship are not ambiguous, they’re not afraid to make plans and follow through on them, and more importantly, they treat you with care, trust, respect, and eventually love consistently. They don’t burn up their energies resisting you and you don’t burn up your time and energy making excuses for them and seeing meaning where there is no meaning.

When someone is not interested, it doesn’t mean that they won’t stick around for the fringe benefits, especially if it becomes apparent that regardless of how poorly they behave, that you will still be there.

There are others who are half-hearted, a bit ‘meh’, and actually vanilla in their interest, in that they think you’re ‘nice’ or whatever but you’re not ‘The One’ or even in danger of becoming ‘The One’. Sometimes they flat out know this, but maybe because they’re not genuinely looking for a ‘The One relationship’ – possibly because they’re avoiding commitment – you will do to pass time with. Some people overestimate their interest, then realise that they’re not as interested as they thought, and either think they might rediscover that interest again (probably not), or that again, you’re good to pass time with. Of course, if something better comes along, they’ll be out of there.

Don’t sell you short, and if the relationship and your interest aren’t mutual, flush before you lose your dignity and self-esteem.

You cannot be available for an available relationship if you’re making yourself available to someone who is unavailable.

Blind Spots Block The Relationship You Want
When You Experience Conflict In Your Friendships Because Of New Boundaries
Guest Post - Dating Games: The Pushey Pulley Game