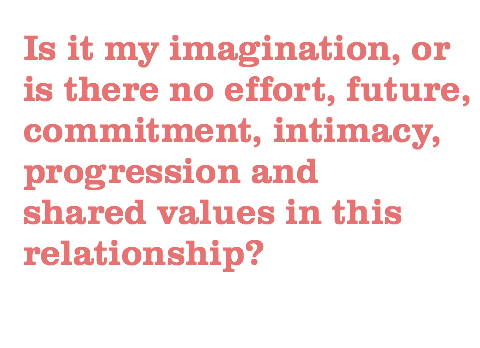 Of all the subjects I’ve written about, Future Faking, which is when someone gives you the impression of a future so that they can get what they want in the present, has struck a major chord with readers. It’s not just because many of us walk around with a misguided belief that people, especially men, don’t talk about a future unless they have serious intentions; it’s also because when the future doesn’t materialise and we come crashing back to earth, it’s incredibly painful and often difficult to work out what was real and what was fake.

After you realise that someone has been faking a future with you, it actually reeks of The Emperor’s New Clothes, a tale by Hans Christian Anderson about two con artist weavers who in exchange for gold thread, silk and a loom, promise to sew some new clothes for a very vain emperor. There aren’t actually any clothes, but they pitch that only people who are incompetent and stupid will be unable to see them. Of course his subjects can’t see them and realise that something is up, but because they don’t want to be seen as incompetent and stupid and ultimately fear losing their jobs, they admire the imaginary clothes.

Of course the emperor can’t see them either, but continues to brazen it out because he doesn’t want to admit stupidity or incompetence either, so he goes ahead with the procession through the kingdom where all of the onlookers act like they can see the clothes. Then a child with nothing to lose, calls it as he sees it and declares that the emperor has no clothes on, and then everyone starts to agree with him. The emperor, still unwilling to admit that he is wrong, continued on with the procession stark naked.

Even though you may struggle to admit it, there were likely code amber and red indications that all was not well. The first indication actually is that it should seem odd for someone to come at you so intensely and spin a future when you haven’t had the time, experience, knowledge, intimacy etc to not only trust in what they’re talking about, but to actually want that future. Often Future Fakers pitch themselves in such a way, that it’s like there’s something wrong with you if you don’t believe in them even when there’s nothing to show.

What I know from reading countless stories and my own experiences, is that there is a point when you recognise that this so-called future is not materialising and neither is the great character and values that you’ve been trumpeting about them.

You don’t want to seem ‘incompetent’ and ‘stupid’, because you’re likely already thinking that you ‘should’ have seen the signs, are berating yourself for making a mistake or are even calling yourself a ‘failure’, and dreading having to start over. You don’t want to lose the relationship or the potential of one, so you keep acting like you can see the future, characteristics and values, which is effectively pumping them up.

Oddly, you give yourself a harder time for believing or even Betting On Potential, than you give them for basically bending over and talking out of their bum so that they can ‘gain’ from you.

At some point, maybe even very quickly, your ’emperor’ can’t see any of these things they’re promising either (although they may be deluded enough to believe that they intended to) and after overestimating what their capacity was for a relationship or exaggerating themselves, or even outright fabricating a future and a personality, they don’t want to look like a numpty either. So…they’ll keep going along with the charade, except for that because the future is catching up with them, they then have to either disappear, behave in a shady way to get you to end it, step up the lies, or behave in a shady way to blame the lack of future on some ‘failing’ on your part.

If you’ve found yourself being ‘spat out’ of a future by someone who everyone seems to think the sun shines out of their arse, it can be infuriating and even pure mind effery to think that you know the truth while others appear not to. But what I’ve noticed about the ’emperors’ of this world, is that they’re often surrounded by people who are just like how you were – having inklings that they’re not as nice / amazing / kind or whatever, but not wanting to look ‘stupid’ or ‘incompetent’ for being involved with them.

You’ll also find that there’s often a sheep mentality at work – someone says something and because some other people parrot it or they appear to have social proof because they seem ‘oh so popular’, people who see how things really are don’t want to rock the boat. Of course, when someone does eventually speak up, it’s amazing how suddenly others have something to say too.

It’s easy to convince yourself when you’re feeling rejected that someone’s character is very specific to you. When you don’t make it so personal that you internalise it and change how you feel about you, you have enough perspective to see that they’re often not as adored as you think they are and that you’re not alone.

And sometimes it’s not even that one person in the crowd that calls it as they see it; sometimes it’s something that they do that’s so frickin’ shady that it jolts you into reality and turns you right off them.

What’s important to remember is that when you meet someone and get to know them, you’ve both got to show up with character goods and create the actions that yield a relationship, that you can then build from and make plans for the future for. You shouldn’t be so keen to have a future with someone that you hardly know – let the present build into something solid.

Don’t let your ego and fear of how things might ‘look’ – which is really judgements that you’re making about yourself – get in the way of seeing and acting upon how things really are. The funny thing is that when when you strip away the excuses, the assumptions, denial, rationalising, betting on potential and basically all illusions, your ’emperor’ is in the buff and just not that special. Talk is cheap but action is where your relationship is at.

Defining Assclowns: Men you shouldn't want to date: Part One
'Entanglement' and what happens when we look outside ourselves to feel good
Why do men blow hot and cold?