Future Fakers: Understanding Why Someone Fakes a Future With You 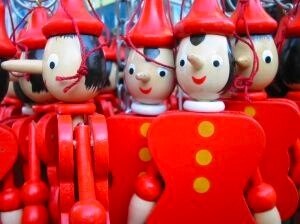 Reading the recent guest post by Trish where her Mr Unavailable made a lot of noise about them spending Christmas together and then went dark on her the day before and spent it with his ex wife and ex girlfriend, and went on to subsequently mess her around for another couple of Christmases, it begs the question of:

Why does someone pretend that they’re going to be and do more than they actually intend to?

Why does someone talk about the future (often unprompted), make plans with you, and take you down a merry path of believing them, when in actual fact, they have no intention of coming anything close to doing any of these things?

My inbox is filling up with emails from women and men who are bewildered by the deceptiveness of people they’ve been involved with. I think, as Trish found out, faking a future with you, particularly at a time of year when everyone around you seems to be making plans is downright nasty.

But telling porkies isn’t just for Christmas; this happens all year round when you’re involved with someone who is reactive and inclined to say and do what they need to, to get what they want.

From the cheater that says ‘You know my situation and of course I’m gonna leave her and be with you!’, to the guy that says ‘So what are we doing this Christmas?’ and then disappears days before resurfacing after Christmas has passed, pretending that nothing happened or that you misunderstood, to the guy who says ‘I want us to be together every day – give up the lease on your flat and let’s move in together’ only to suddenly be ‘overwhelmed’, ‘busy’, or ‘unsure about us’, there are plenty of people getting caught short by Other People’s Fantasies.

Why do people fake a future with you? Because right now, in the present, they get what they want.

There are probably two sets of people who engage in these damaging fantasies:

The ones who intentionally say and do the right things so that they get what they want. Maybe they benefit financially, get their ego stroked, a shag, a shoulder to lean on, less hassle about them delivering on promises, whatever. These people are especially passive aggressive because they appear to be going along with you when all the while, they’re creeping around behind your back doing something else so that they do what they always intended to do anyway.

Then there are the ones who meant it as much as they could mean it at the time. They want to believe that they’ll do these things but due to their overall nature of having actions that don’t match words, they’re reactive and very Out Of Sight/Out of Mind and so the moment that the dust settles a little and the realisation dawns that they have to commit to what they have said and follow through, they panic and extricate themselves out of things either in a dramatic manner by just disappearing for example, or by subtly and passive aggressively shifting their way out of things. Maybe they orchestrate a fight by behaving like a jackass so that you react and then they can find an excuse to dodge whatever bullet they’re trying to dodge.

Future fakers say and do what they need to, to minimise confrontation and obstacles that prevent them from getting what they want.

Let’s be real: If they were up front and didn’t make plans, there would be confrontation and they wouldn’t get what they want.

The thing is, either way, it’s shoddy, sh*tty behaviour that has a devastating impact on the person that takes them at their word.

If the cheat said ‘Actually, I have no intention of leaving my wife and all we’re ever going to do is shag a couple of times a week and meet up for the occasional lunch with texts and emails thrown in inbetween’, you might think it was a bum deal and opt out.

What you have to realise with the type of person who would actually fake a future with you is that much like with assclowns and Mr/Miss Unavailables not just being born yesterday, neither is the person that fakes a future.

It’s not a one off! They’ve done it before. They don’t wake up at 35 or 44 or 53 or whatever and think ‘Oh I’ll just start lacking in integrity and leading people on a merry dance’ – they’re always overstating and then having to extricate themselves out of awkward situations.

They’re practised at it.

How do I know? Because the type of people that fake a future with you take no responsibility for the fact that you get drawn into their illusions. It’s one thing if you’re coming up with your own illusions and adding two and two and making ten because you’re getting carried away and not sanity checking your ideas, however, what amazes me, is that people who fake a future often don’t have to say and do the things that they do. They don’t have to say they want to marry you, move in, spend Christmas together, have babies, spend every waking moment with you, love and cherish you and bla, bla, bla, but they do.

This arises when they’re in a ‘hot’ phase where they feel desire and excitement and fall into their pattern.

The booby trap comes in when after they have blown hot and you have been drawn in, they become frightened that you may expect, want, or need too much based on what they have said and done, so they manage down your expectations by blowing cold or lukewarm.

Future Fakers are users and flip flappers. You’ll never know where you are with them.

They create the mess and then take no responsibility for it, claiming ‘You’ve got the wrong idea’ or ‘I don’t know what gave you that impression’, and when you’re blindsided by the shift in their behaviour (and trust me you will be), you might become filled with self-doubt and believe them which will be the start of a ride down a slippery slope where you feel you can’t trust yourself or call them on their behaviour.

You can’t always protect yourself from people like this because depending on what stage the first ‘fake off’ gets discovered, it might be the first time you experience a code red alert.

But remember that the ‘fake off’ is just another example of someone whose actions don’t match their words.

This is why it’s important to acknowledge and process the fact that someone is all talk and very little action, or that their behaviour may even be intense and too fast – something that you’d normally be uncomfortable with under other circumstances or have even experienced before. Listen to the warning signs!

If you’re used to them saying one thing and doing another, make sure that when they discuss anything big with you, you get them definitively on it and make concrete plans so that if and when things go t*ts up, they can’t pull the ‘You misunderstood me’ line on you.

And always make sure there are consequences because if they think for one moment that they have gotten away with it, it won’t be the last time you put up with their fakey ways.

Being involved with people like this who don’t always reveal their ways immediately, means that you may not be able to avoid them pulling a stunt on you, but if you make sure you keep your feet firmly in reality, have boundaries, and call them on their behaviour, you can implement damage control rather than buying into subsequent lies and illusions to try to make the previous illusions true.

If you’ve already been caught out by a future faker, my heart goes out to you and whatever you do, do not blame yourself for the fact that someone has behaved in this manner towards you. If it’s happening to you now, step back and take refuge with people who have more integrity and care, such as family and friends.

If you’re worried that you’re with a Future Faker and think you’re about to have a disappointment thrown your way, take control of the situation and don’t wait for them to determine how you spend the Christmas/Holidays. Call them up and double confirm your plans…have a plan B ready.

Ultimately, stay away from Future Fakers, who aside from messing with your mind and your plans, are flakey, deceptive, and lacking in empathy for you. If you’re with someone fake, even their sand castles in the sky are fake, and if you’re serious about being happy, you won’t be happy with someone who can’t keep it real and act with love, care, respect, and trust. People who do have genuine good intentions are uncomfortable saying that they can be and do more than they’re capable of and will be keen to keep it real with you so you can have a real relationship.

Love Lessons: When You Can’t or Won’t Ask Questions When Dating (P4) -Getting To The Answers
When They Come Back Claiming That They've Changed...But Have They?
Terms & Conditions Apply: Reading the Small Print in Dubious Relationships
Share this...