Why You’re Still Stuck On Hurt 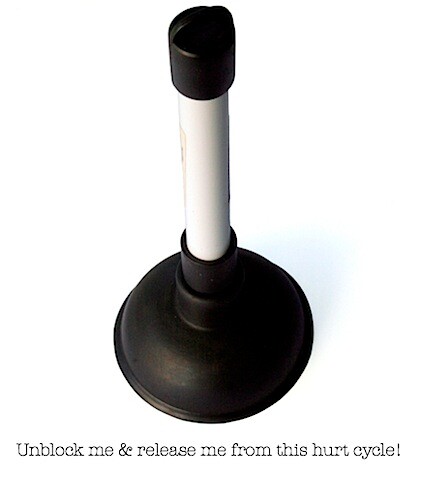 Years ago, I used to wonder how ‘everyone else’ could bounce back. I was doing such a good job of burying my various hurts and distracting myself in more unavailable relationships that I became numb and trapped in a vicious cycle. In the meantime, looking around me, some people were like Teflon and seemed unbothered (not a good thing it turns out) and then others, would go through difficult breakups and experience other losses and difficulties such as losing a loved one through death, professional struggles etc. and would gradually recover over time and come out the other side.

Many people have been in my situation wondering:

Why am I still stuck hurting?

Long-time readers will know that my ‘old way’ of dealing with stuff was basically not dealing with it. I’d will my latest hurt, anger and indignation to the back of my mind and lock it up for a few months with the idea being that when I eventually revisited it, the hurt would have dissipated. A habit learned in childhood where I developed a ‘wonderful’ aptitude for invalidating and/or ignoring my feelings and experiences as a coping mechanism, I still check myself before I wreck myself and make sure that I acknowledge feelings ‘currently’ instead of experiencing an onset of convenient ‘amnesia’.

The last major (or even minor) breakups were different and I was musing on why I’d come out of the other side instead of carrying Yet Another Breakup Suitcase on my back with all my other excess baggage, and it’s because in using my old blog as a place to share anecdotes from my life including some of my angst, I inadvertently dealt with things ‘currently’, didn’t continuously interrupt ‘the process’ of grieving the loss and the hurt and ultimately didn’t run in the opposite direction and ‘shut down’ when I came up against something that made me feel ‘vulnerable’.

If you’ve read The No Contact Rule or my NC support email, you’ll know about the importance of working your way through the loss of the relationship and not avoiding your feelings. You’ve got to grieve.

I realised that up until summer 2005, I never grieved or really thought about anything painful to a great extent. Nothing.

Not my parents splitting up just before I was three, the whole hospital saga, moving away, a catalogue of childhood drama, throw on some adult hurts – nothing. It’s not that I didn’t get angry or upset; it’s that I did it randomly, buried it, and felt crappier about myself by blaming myself, so I’d be hurt over a breakup in 2000 but I’d actually be crying and angry over something from 1999 or 1989 even.

And that’s where I recognise where 1) you get ‘stuck’ and 2) why you ‘can’t’ unblock yourself.

You get stuck because one hurt reminds you of another hurt – conflict, ‘rejection’, breaking up can re-open old abandonment wounds and make old hurt and experiences ‘fresh’.

This then becomes like “Well if I deal with my feelings about this breakup, it’ll remind me of another breakup and then remind me of when my father/mother abandoned me when I was 5. Oh and to top it off, if I do start to look at this all a little too closely, I may even see things about myself that I don’t feel like facing right now.”

So of course you’re going to remain stuck when the current hurt is shielding you from the old hurt and the only way of reaching the ‘plunger’ to unblock yourself is to work your way through the hurt first, take action, and face all your feelings and realisations, good, bad, and indifferent.

If you’ve wondered why you keep going back it’s because not only are you trapped in your feelings and seeking validation but if this current hurt is similar to an old hurt, it’s like “Let me avoid dealing with what I need to by trying to control the uncontrollable and attempting to right the wrongs of the past”.

The stages of grief that we go through are part of honouring the good, bad, and indifferent of what we felt, experienced and even hoped for, and are entirely natural and necessary. If you’re stuck, it’s because you get stuck on one particular aspect of it or veer back and forth.

Some people get stuck in denial. Wanting to not believe it is natural and initially it helps you come to terms with what’s happened if you have your feet in reality. It’s ongoing denial that’s dangerous because reality isn’t catching up with the fantasy.

Some progress into anger and stay angry both with themselves and/or with the other party. Anger is actually a great healer if you process and grow out of it but sometimes we can become obsessed with the anger, blaming ourselves too much, being a victim, or feeling like we have to tell them all about themselves or even take revenge.

If you’ve ever gone back and forth to an ex or are still coming up with Plan 179 to ‘win back your ex’ it’s because you’re still bargaining. If you keep playing out the drama in your head, coming up with plans or even trying to act upon them, you might go back to being angry or in denial.

If you can’t move past the depression, it’s because you’ve become stuck in the negative side of accepting that the relationship is over. You may even have gone back to denial or anger. If you’re not expressing it and directing it towards yourself plus it’s aggravating the unresolved hurt from the past, it may feel overwhelming and knock you for six.

I came ‘unstuck’ when I faced the ‘new’ and ‘old hurt’. Initially it was like a dam erupting (or like when my waters broke in labour and seemed to explode like one of those American fire hydrants – choose the image you prefer!) but it was freeing to get rid of the toxic stuff that was eating me up.

Yes, remembering is painful but actually, the power to hurt is quite limited and ridding myself of 28 years of pent up hurt, anger, and frustration gave me clarity and calm. The sky didn’t fall down, my ex skeletons didn’t come back from the unavailable and assclown cemetery to haunt me, and some fresh perspective (support groups, therapy, feelings diaries, unsent letters etc. can be very helpful here) helped me to stop taking ownership of other people’s BS and instead focus on what I knew I could truly be accountable for – my actions and what I chose to be and participate in going forward.

One of the things I’ve realised over the past few years is that things I procrastinate over for oodles of time take a shamefully small amount of time to do/address. Like minutes or hours to do versus weeks or months of putting it on the backburner. Breakups, moving on, dodging old hurt – they’re exactly like this. When I stopped dodging myself, romanticising a ‘bad romance’ and putting myself at the centre of other people’s actions, it took months instead of the many years I’d clocked up treating me like I wasn’t good enough.

You can’t force yourself to get over something but you can help it there with your feet in reality, the BS Diet, not avoiding your feelings, having boundaries, and having a positive commitment to you instead of negative commitment to someone else or to bathing in feeling bad. Treating you well will break the hurt cycle and you will come out the other side.

Why does somebody not being interested HAVE to be about your worth?
Are you treating all conflict and criticism as 'bad'? Negative associations strike again!
Podcast Ep. 88: You're Not The Boss of Me!