Are you clutching your security blanket? Why it’s time to strip off the extra layers of anger and hurt you’re carrying 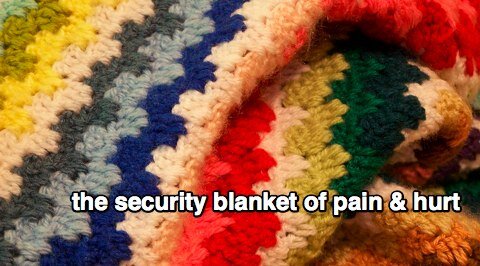 While listening to a reader reel off a list of hurts and incidents that had taken place over the years, I was reminded of an episode of the Salt N Pepa reality show, which I managed to catch one day when I should have been tidying and instead was regressing to being a teenager and watching VH1. Anyway, I digress!

Both women from the famous rap group seemed to have a lot of old hurts piling up between them since their sudden end in 2002. They attended a joint therapy session in the episode and it was like listening to ‘the blame show’. ‘You did this…’ ‘I remember when…’ ‘I’m still mad at you because..’ ‘You make me so angry and it reminds me of that time when you…’ and on and on and on.

Are you like a dog with a bone holding onto the old hurt like your life depends on it? Does your pain feel like a badge of honour or as the reader described it, a “security blanket”? Do you make out like you’ve let go of something but at the first sign of trouble and you’re back to pulling out your ‘security blanket’? Are you stuck on repeat?

Pain is very comfortable as is complaining. We can get into a comfort zone and it seems easier to hold onto the pain and be angry, and blame or feel bad about ourselves, than it is to process that pain and work through letting it go.

We can be very righteous about our pain and when we think about letting it go and moving on, it’s damn scary because when we are in pain, we can blame what we do and don’t do on it.

Even though we’re always responsible for ourselves, pain hides this, so of course the thought of not holding on tight to it will feel like you can’t escape you and your responsibilities – funny though, you still have them with the pain.

It’s also important to remember that if you remain hurt and angry, that’s not the fault of the person who you believe has wronged you; holding on to it and the effects of it are yours to own.

From the moment you have the hurt and the anger, while you’re going to have it for a time, when you work through what has happened, process any loss, and make the efforts to deal and move on, you’re limiting the impact of the person and the situation. The longer that you hold onto the anger and hurt, the more connected to the incident or the people within it. This means, for instance, when you’ve broken up with them, holding onto the hurt is another way of staying connected to them. However the longer you hold onto these feelings, the less it actually is about the incident and the more it is about your own resistance to letting go.

What does holding on mean to you? What does letting go mean?

You can’t pretend you’re not hurt or angry and it is perfectly okay to feel these emotions, but we must be self-aware of the damage that these can cause if they are unaddressed, unprocessed, and held onto tightly.

You don’t want to be like those people we’ve felt frustrated with who suffer with ‘And one time, in band camp’ trotting out the same old stories, excuses, and pains. You certainly don’t want to be someone who ‘stays and complains’ and bears grudges rather than actually doing anything about the situation. Remaining angry masks inaction – if you were taking action, you’d be working your way through your feelings and moving on. 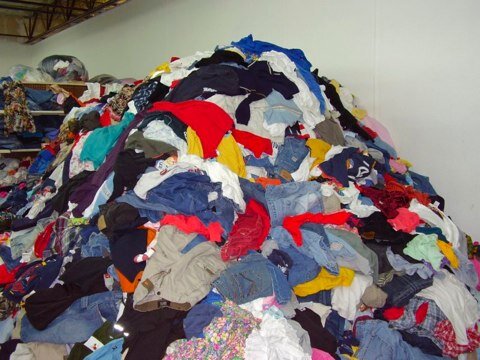 During the reality show, the therapist asked them to go into a room where there was a pile of clothes. Each woman stood on either side of the pile and for each ‘offence’ that they were still holding onto, they said it out loud and put on an item. They looked ridiculous and uncomfortable. When they were done listing their hurts, they then worked their way through each one and explained (if necessary), let it go, apologised, and moved on and took off an item to represent it.

As I talked with the reader I was reminded of the show, so I asked her to imagine that she had a three piles of clothes to choose from. Big hurts, medium hurts, and little hurts represented by heavy clothing like jumpers and coats, medium weight clothing like trousers and shirts, and light weight stuff like t-shirts, socks, vests etc.

I said: Now imagine you took each and every thing that you’re pissed off about and put on an item of clothing to represent each one – how damn uncomfortable would you be? 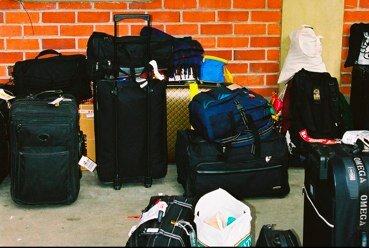 Here’s the thing: A lot of us have a hell of a lot of baggage and while we manage to get through life with it, it’s a large and uncomfortable load to carry that greatly impacts on our experience.

You cannot persist in carrying all of this baggage. Or you can, but you’re loading yourself down and crippling yourself. There will be failure to launch.

It’s a bit like putting a roof rack on a car and piling on too much stuff and wondering why the car is struggling. It may get to the destination, but it’ll take longer and probably experience much damage along the way.

There is only so much baggage you can carry without being distinctly uncomfortable and while you can become used to carry this excess load, this doesn’t mean that you should.

When you factor in all the different things that you do in life that require different levels of ‘flexibility’, ‘mobility’, ‘temperature’! etc and you imagine all the extra stuff you’re carrying in those situations, you can greatly see how you’re impeding yourself.

It is not others loading you down. They may have contributed to your ‘baggage’ but they’re not the reason you’re holding on to it.

You want to know why you’re immobilized, not seeing the wood for the trees, and having blind spots like anger, another person, a belief you’re stuck on? You have so much stuff weighing you down and blocking your way, you can’t see clearly and you can’t think straight!

Whether you imagine clothing for each piece of hurt and anger, or you actually go to your wardrobe and start loading yourself up with clothing, start getting to grips with how much baggage you’re carrying.

Start with a baseline of having on an average outfit (we’re all entitled to ‘hand baggage’ – it’s normal), and imagine or actually put clothing on top of this.

Now ask yourself what you can let go of immediately and what other stuff needs to be gradually worked on?

As I said to a few people recently,

What is the point in staying in or going back to a relationship with someone and frequently reminding them how they’ve failed you by rolling out your hurt and anger every opportunity you get?

Why start a new relationship when you’re still emotionally invested enough to be pissed off?

If you’re still angry about something and now years are going by and you’re still bringing it up, it’s time to ask: What am I still seeking out of this situation and anger? Whatever it is, it’s time for you to do whatever is necessary and find peace so that you can move on.

A few years ago I made a very conscious decision that there was basically only so much ‘shit’ I could hold onto, so I had to choose wisely about which bones I wanted to be like a dog with. When I thought about it in terms of actively holding onto stuff, I wanted to offload as much as possible and not make a choice to hold onto anything. It doesn’t mean I have forgotten the things that have hurt me, but they hold far less weight and importance in my life, and I don’t give them any power whatsoever.

I had a whole load of old hurts stored up about my parents and I was angry. It then became super tiresome and affected my health, my relationships, and my self-esteem, and I started to wonder what the objective of being, for instance, pissed off with my mother was?

What did I want from her? Would it have made a difference? Maybe, maybe not, but one thing I do know is that whatever difference we think getting whatever it is that we think is the key to letting go of our anger is, it rarely matches our expectations. I wasn’t going to pursue getting her to be and do what I want for my hurt and anger to the detriment of my own life.

All I know is that the difference between carrying my old baggage and not, was fantastic and freeing. I basically said ‘Eff it. It’s done, I’ve been angry and hurt for so long, I’ve lost track. I don’t care. Well I do, but I don’t care that much that I want to spend a minute longer with my life on hold.’

Don’t weigh yourself down. Start offloading excess baggage – you’ll surprise yourself if you take the time to try and stop clutching your security blanket. You need to hold onto yourself – not pain and anger.

When I ask people what it will mean for them to let go, the most common answers – ‘moving on’ and ‘letting go’. Stop being afraid of letting go – you have to sometime. Hard as it may be for you to hear, the world has kept turning and the people and things that you are angered and hurt by have moved on or passed. It’s like you’re standing still in the past holding yourself back. It’s time to step forward.

Check out my ebook on emotionally unavailable men and the women that love them, Mr Unavailable & The Fallback Girl as well as the No Contact Rule and more in my bookshop.

Clothes pile image source and other images via SXC

Podcast Ep. 180: Time For A Second (Or Umpteenth) Chance?
We must stop reinforcing shame. It's OK for us to like and love ourselves.
The Trouble With Being Blinded By Intelligence in Dating and Relationships