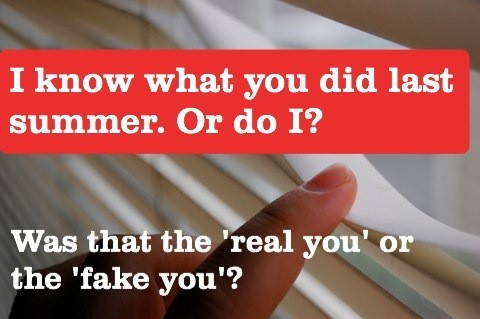 Sometimes, you find yourself in the rather infuriating position of feeling like you know the ‘real’ side of someone and that ‘everyone’ around them is being fooled. You see them going on about their merry life as if everything’s hunky-dory and yet your head is still spinning from their treatment of you. In fact, your life may be in absolute tatters after your experience with them – your self-esteem may be shot and the last thing you can do at this time is attempt to go on your merry way. ; ;

Particularly if you work together or move in the same social circles, it can feel like mind effery. You might overhear someone praising them or have to be in the same room while your peers are killing themselves laughing at their jokes or smiling broadly at them and you want to scream, “Can’t you see who they really are? If you really knew, you wouldn’t be friends with them!” You might even want to blurt out a list of everything you know.

Maybe you see them prancing around with their new love interest, preening like a peacock without a care in the world. They seem loved up from what you hear, or maybe you know because you’ve been reading their declarations on Facebook and going through their photos and poking through their mutual friends…

“How can they be so frickin’ happy? I’m practically dying here and they’ve spat me out of their life, shown me their arse in more ways than one, and yet, I’m alone and they’re loved up! Is it me? Did something about me bring out a dark side in them?”

The likelihood is that you’ll experience doubt and blame yourself – Is it me that brought out their bad side? Why would they treat me this way but not others? Is it something I said? Is it something I did? How the hell can they not see who they really are?

And of course you know that it’s not your imagination, that you’re not going crazy and that you haven’t ‘made’ them treat you badly, so as you try to recover from the experience, you may be bristling with indignation or like a pressure cooker full of suppressed anger, consumed with this idea that they’re getting away with it and that no one knows who they really are. But is this really true?

You see the thing is, unless they fell out of the sky into 2012 with no previous history and a ‘clean bill of health’, you are not the only person who knows who they are. You’re not. Not everything is about you.

When you convince yourself that you’re the only person that knows the real them, you’re actually still making out like you’re the exception to the rule, and you’re carrying on as if to say that not only did your relationship with them exist in a vacuum, but something about you and your relationship makes their character and behaviour specific to you – this is inverted ego issues.

I know it’s nice to think you are that special and your relationship and ‘connection’ was out of this world, but the only reason why you’d want to convince yourself that you’re the only person that knows the real them, is to actually remain stuck on it being about something being wrong with you.

If you don’t know what’s real or what’s fake, or you feel like you’re the only one that knows the ‘real them’ which has opened you up to being abused or taken advantage of, you don’t need to play Columbo or try to be their friend or attempt to win them ‘back’; you just need to get out. Fast.

Somebody somewhere knows (possibly a few ‘somebody’s’ who may even be in their harem or blaming themselves like you)…you just don’t know it, probably because your perspective is based on you focusing on your experience, your sense of rejection, and your perception.

You ever hear about a breakup or divorce and say “But they seemed so great together!” or “I can’t believe it!” or “Man, if those two can break up, it doesn’t leave much hope for the rest of us!”? If you’re saying stuff like this, it’s because you don’t know them or their relationship as well as you think.

Someone’s work persona may be very different to their relationship persona or even to their social or family persona. You see different sides to people in different situations plus there are some who are very good at ‘presenting’ a persona that helps them win friends, influence people, and keep their insecurities and even shady shenanigans behind closed doors.

What I do know is that people who behave in shady ways and even go to the trouble of messing with your head, have got ‘form’ for it – you just don’t know about it. You’re not looking in the right places for the information. What? You really think every ex had a perfect time with them and that no one, anywhere has ever seen what you’ve seen? Come on now!

You may have missed some code amber and red alerts that indicated who they are, or may have skipped that discovery phase of dating where you could have sussed out their past. Sometimes, we can be so enamoured and propelling them up onto a pedestal, that they could tell us that they’re The Most Perfect Person On Earth That Does Platinum Coated Poos and we’d believe them – that doesn’t make it so though.

Of course they might like you to think that you’ve been struck by assclown lightening and that they’re a wonderful person of high integrity that’s been provoked into deviating from their good selves due to you not being good enough – not buying it. If they were so frickin great and good, they could have deviated their way out of your life without mistreating you.

Let’s be real: In my time of writing Baggage Reclaim, I’ve heard from thousands of men and women who have been in relationships that they claim others wouldn’t associate them with and would actually greatly contradict the perception that’s held of them. There are a lot of people whose relationships don’t reflect values they claim or appear to have.

You can go from here to eternity worrying about whether ‘everyone’ is in on your reality – what’s the point? It’s like trying to control the uncontrollable. Why do you need them on ‘your side’? Get on your own side!

You’re not alone – you know the real them. It is not your job to do a Samantha Jones equivalent and pin notices around your neighbourhood to out them while wearing a mac and a wig. You know – that.is.more.than.good.enough. ; ;

The good thing is that if you heed the warning signs from their actions instead of trying to get a Ph.D in Why Did They Do This? Is It Me?, they won’t ever have an opportunity to get close to you again. You don’t need social proof, nor do you need to have witness statements to corroborate your findings – it is only you that needs to judge your experience and take action.

Advice Wednesday: Even though we've both moved on & got married, my ex still wants to mess with my h...
Quiz: Are You Making These Common Dating and Relationships Assumptions?
What is love and a good relationship?