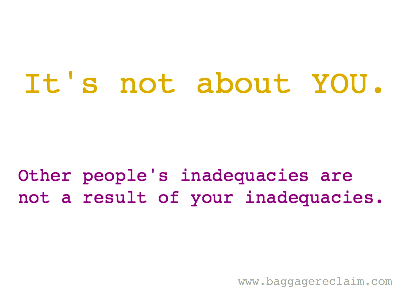 Have you ever felt so embarrassed about something (or even ashamed) that you try to avoid any and everything to do with it? I remember walking by St Stephen’s Green in Dublin and seeing a guy who I had an ambiguous flirtation going on with. Strutting in my wedge heels, next thing I found myself sprawled out on the pavement with my legs in the air. There was an audible gasp from the crowd queuing outside the club and then some laughter, including mine which disguised my deep embarrassment and even masked my tears of pain. Mor-ti-fi-frickin-cation. Every time I saw him after that, I steered well clear of him, which turned out to be a blessing as I discovered he was Mr Unavailable with a girlfriend stowed away.

Being really embarrassed or even ashamed and keeping a distance as a result of these feelings, isn’t limited to embarrassing moments though – I hear stories about parents, exes, and even one night stands that serve as a reminder that while it is so easy to make someone’s behaviour about us, there can be ‘deeper’ reasons than anything we’ve managed to come up with (normally a ‘one false move’ that we’ve pinned it on) or various inadequacies that we think we have.

I’ve said it many times before and I’ll say it again – It’s not about you. What others do and be (or fail to) is about them. Yes it can hurt and directly impact us as a consequence of their mentality, actions, and even their Overactive Pride ‘Thyroid’ but don’t get it twisted and think that you’re capable of Jedi Mind Tricks.

In the chapter The Making of a Fallback Girl in Mr Unavailable and the Fallback Girl, one of the issues I talk about is how some parents are so ashamed by their absence or what they’ve done, that rather than step up and at least make a good attempt at trying to build some bridges and be present now, they keep their distance out of shame.

“Sometimes they do regret their actions but instead of the issue taking precedence, their pride does. This means that they don’t do anything to make the original abandonment and hurt right because of their own shame and what they think you might say or do.”

You end up being a reminder of a ‘version’ of themselves that they’d rather disassociate themselves from even if you’re holding out an olive branch, a Reset Button, and some white wash. It’s like they can’t get past this and end up heaping on more pain. They may even be afraid of screwing up some more or having to be accountable and answer questions. Even if they attempt to forge a relationship with you, explanations and questions may prove too ‘taxing’ and so you end up keeping it zipped so that they stick around and you end up with an unsatisfactory ambiguous relationship, or they exit.

It may even be that they haven’t changed that much or at all, even if they’d hoped to, so being around you might feel ‘frustrating’ as even if you don’t specifically say it, they feel like they ‘should’ be more than they are. Next thing you know there’re avoiding you or cooking up a conflict to create an exit and ‘distract’ from them. The awful thing is that you may still be blaming yourself when you really shouldn’t be.

When you’ve had an unhealthy relationship with an ex, some will show up and keep showing up because they’re shameless (and may even believe that the issues and their own contribution were not ‘that bad’) and others, steer clear because their involvement with you may remind them of a them that they’d rather leave firmly in the past. Maybe they know that they’ve already caused more than enough pain. Maybe they know that they’d struggle to explain themselves. Maybe apologies aren’t their strongest suit. Maybe they just want to move on and have a ‘fresh start’. This might mean that they’ve changed or are in the process of changing (or so they think), or it might just mean that they’ve changed the setting and the characters.

It’s not unusual to hope for an ex, even if they didn’t treat you that well or even treated you really badly, to at least attempt to get in touch with you or even attempt to get back together. It’s that part of you that wants validation. It’s like when you’re not invited to something that you don’t want to go to but you feel insulted that you weren’t at least asked or like when you feel left out by a group of people that you don’t even like.

Most of us aren’t comfortable with being ‘forgotten’ and there’s definitely a lot of us that are not comfortable with people who’ve wronged us not at least attempting to show remorse. In time we learn that actually, being left alone doesn’t mean we’re forgotten (judging by the stories I read about people’s memories of their exes and the Returning Childhood Sweetheart our memories are long) and that actually, it may mean that we’re being remembered and the person knows to let things be. Some people’s way of showing that they ‘get it’ is to steer clear even though your version of them getting it might be for them to say or do something else.

Over the almost seven years of writing this blog, I’ve also heard many tales about one night stands and ‘great first dates’ or first few dates, where the two people got down and then….tumbleweeds. Radio silence from someone you’ve slept with can actually be painful to deal with. Sometimes and really, it’s in some respects neither here nor there because the net result is that you can feel discarded, a person ‘let’s loose’ on a date and ends up doing something that they feel quite embarrassed about the day after.

Maybe they feel it’s out of character, maybe they feel that they crossed the line, maybe they feel like you might think something about them – who knows? What I do know is that there are people out there that will sell you pipe dreams to get you into bed or who will judge you for sleeping with them (extra ri-di-cu-lous) but there are some people who judge themselves on their shenanigans. What you can rest assured about whatever their reasons, is that it really isn’t about you because whatever their reason, it says more about them than it does about you.

And that’s really the takeaway here: It’s not about you. People have their own emotions, mentality, motivations, fears, actions, beliefs, boundaries, values (even if you don’t agree with them), trust levels, judgement, experiences, memories, doubts, pain and more, that they’re dealing with and that directly govern what they’re going to do (or not do) in any given situation regardless of whether you’re there or not.

You have all of these same things. Remember not to judge yourself on a perspective gained from an unhealthy experience and don’t punish and berate you when what you want to happen doesn’t come to be. It doesn’t mean that these experiences won’t hurt (trust me, I’ve been the child in the parenting situation mentioned), but it does mean that they will gradually hurt less because they’re not intertwined with you giving yourself a very much undeserved hard time.

Let other people’s shame and embarrassment be their own. Don’t burden yourself.

Can You Take a Hint? Why Hints Are Clues To What's Really Up With Your Relationship
Overthinking What Men Say & Do: Applying meaning where there is no meaning
Fast-Forwarding: When Someone Speeds You Through Dating