Are You Too Eager For The Fairy Tale ‘Ending’? The Returning Childhood ‘Sweetheart’ Revisited 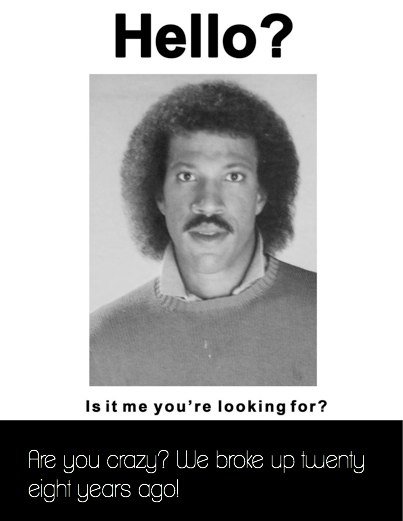 Back in 2009, following what at the time I considered to be an alarming number of emails and comments from readers who had been burned by an ex that had contacted them via their alumni site or Facebook, I wrote about the trap of the returning childhood ‘sweetheart’. You know who I’m talking about – they’re normally just fresh out of a relationship, possibly with the person they burned you for all of those years ago, or they’re actually literally just separating or just fishing around on email wanting to chat about ‘old times’ which soon head into steamy territory.

If you respond, you’re either delighted to hear from them because it’s a huge source of validation after possibly never fully getting over them, or you have “What if?” curiosity and convince yourself it’s ‘serendipity’… even if the last time you were in touch, it was to slap them with a restraining order.

Over the past three years, thanks to Facebook (or Fauxbook or Fakebook depending on your feelings towards it), incidences of having your heart broken by someone from your past who returned into your life in a blaze of Future Faking and Fast Forwarding glory are frighteningly common. I’m still genuinely surprised that people find hook ups and new dating prospects on Facebook, or even manage to juggle several flirtations at the same time on there.

It’s not that there aren’t incidences of people who lost touch under healthy circumstances who bump into one another randomly or end up reconnecting at a group gathering, but I just don’t understand why so many people think that there is a fairy tale and a pot of gold at the end of the crumb communication rainbow, where someone who didn’t treat you with love, care, trust and respect all of those years ago, or someone who cheated, or broke your heart, or even ditched you while you were pregnant, or just wasn’t a great person and had a penchant for telling lies… is now a ‘happy ending’. What the what now?

The problem with the Returning Childhood ‘Sweetheart’ is that they get back in touch because when they flick through their mental Roladex of people who think that the sun shines out of their arse, are still likely to hold them in high esteem and are likely to drop everything for the possibility of being with them, or will at least stroke their ego and engage in some sexting or a weekend fling, they think of… you.

They’re stuck in the past too and in an eagerness to press their Reset Button and connect with a part of them that’s seen better days (or is even extinct…) , they use you like a time travelling machine to feel ‘young’ or ‘sexy’ or whatever again. They often have a few ‘Poor, Poor Me Tales, or even This One Time At Band Camp yawnathons, or have casually omitted their partner and children from their lives, and will lay the charm on thickly with a trowel.

In your eagerness to live the dream, you might be willing to hit your own Reset Button and act like however many years haven’t passed by. Especially if they claim that they have a lot of regrets, your heart may swell in excitement that you’re being validated and vindicated because you think that they’ve missed out on having a good life because they weren’t with you (like some sort of ‘punishment’ for not choosing you), and now you can ride off into the sunset. You may believe that they’re ‘rightfully yours’ because you were with them first and if you’ve been through your fair share of trauma in your life, this ‘romance’ might feel like everything is finally coming together for you.

You may find that you both have two different memories of your time together. You remember that while you were in love with them, that you were unhappy, that you were often on your own, or had to watch them flirt with others, or that they weren’t very nice to you. They’ve repainted your past together as a wonderful time where you were both so madly in love and thwarted by ‘outside forces’.

They may end up patronising you by talking about you as if you’re still the age you were back then. “You’re so shy – I bet you still don’t have a lot of friends..” All this while you have lots of friends. Or “Gosh, I’m so surprised that you’re running a company now.”

Even if you did have a great time together ‘back then’, you might realise that they’re not the same person. When you come down off your cloud, you notice that they talk about themselves a lot, that they seem to be unable to manage to be single for more than about two seconds, that they have anger issues, or seem to talk the talk but don’t have much to show for it.

What I do know with 100% certainty is that someone who comes back into your life after a lengthy period of time if they are a genuine person with honourable intentions, will not try to pretend that X amount of years haven’t passed and attempt to pick up where they left off. They won’t get in touch before they’re even separated or not too long after they have, they won’t attempt to hide parts of their past, they certainly won’t try to act like you don’t need to get to know one another in the present day, and they certainly won’t be Future Faking and Fast Forwarding. They won’t.

I can also safely say that they won’t communicate primarily by text, email, or Facebook (yes I’ve heard of entire sagas taking place on Facebook email/messenger) and they won’t ask for nude shots or keep pushing things towards meeting up for sex.

I have seen all too often the devastation that is caused by having someone who already left their mark on you in the past, come back and do you over again. It’s like having your house robbed twice by the same thieves – bad enough once, but the second time feels so insulting because it feels like they spotted something about you that says “Soft target, must rob again.” It’s easy to rake over things and wonder why someone would do this. Yeah there are some very shady types, but often, it’s a mixture of nostalgia and overestimating their capacity.

But this is real life and you can’t afford to be someone’s time travelling machine or confidence booster that essentially gives them a clean bill of health after they’ve messed up in other areas of their life, like “Well, I’ve been married five times, had a drug addiction, sex addiction, and am actually broke as hell but I mustn’t be too bad because Natalie still loves me anyway and sees potential in me.”

What you have to be careful of is being so invested in this fantasy of being rescued from a life you don’t want or having someone ‘change’ into the person you want and come back to get you, that you leave your proverbial windows and doors open by betting on potential.

They’re just not that special and you’re just not that desperate that you have to be fishing around in your past trying to reconnect with someone that should be left alone. It’s not that people don’t change – some people do – but you need to ask yourself how much validation your ego needs that no matter how much time has passed, you want to have a chance at being with someone who previously treated you badly? Also just because someone gets back in touch it doesn’t mean your default setting has to be We’re going to get together and live happily ever after.

There are genuine childhood sweethearts out there. You know first loves, broke up because they were young and yada yada. If they were genuinely this person, it’s understandable to be curious, but if they weren’t, I’d proceed with caution or hit ‘block’ on Facebook…