Do not engage: why we don’t have to keep riding the same train to destination unhappiness

Don’t forget that I’m on a ‘break’ until September so I’ll mostly be featuring some of yours and my favourite posts from the archives.

A few months back, I did a session with BR students on why we need to stop engaging. That means choosing what we do and don’t participate in or ‘feed’, including chasing negative thoughts and feeding the worry fish, to responding to futile contact when it’s a shady situation with an ex, to carrying the same baggage, beliefs and behaviours and engaging in similar dynamics and expecting different results. At the time I explained that when we continue to hold on to our patterns of thinking and behaviour and yet experience a different outcome, it’s like getting on a train that’s bound for London Victoria but when you arrive there, you’re angry because it’s not London Bridge… even though this would require you to take a different train that goes on a different line. Instead of getting on the train, you just keep riding the same one over and over again – the disappointment cycle.

Through experience and a level of awareness about our habits, we come to recognise that certain things lead to our unhappiness and yet because we still continue with the same responses to feelings, thoughts and trigger situations, we effectively continue to make the same journey on the ‘habit trains’ and pass through the same ‘ole stations en route. Sometimes we try different ‘habit trains’ (or so it seems) but because we’re still including some of the stations, shazam, we still end up at the same destination.

We continue to people please and then we then continue on to feeling neglected. This in itself prompts negative self-talk and unpleasant feelings. We then try to make ourselves feel better and end up soothing in an unhealthy way, probably on some external solution in the form of another person, or even substances, or just self-destructive behaviour, and then we feel better temporarily and then we feel bad again, ultimately winding up at destination unhappiness. 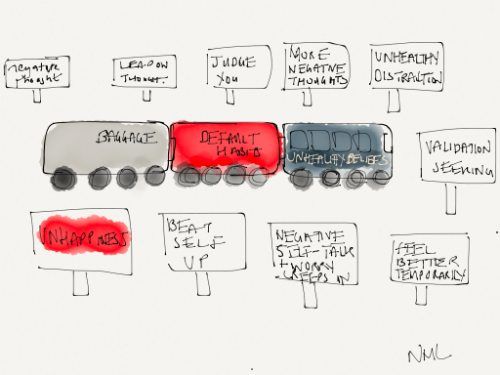 If we keep doing things the same way then we’re likely to end up with similar results. Sure, we can hope that others will yield and fit in around the way that we operate, but that’s like assuming that what’s ultimately not working for us is the ‘right’ way for others. It’s this idea that we should continue on as is even though it hurts, and that others ‘should’ change to accommodate this.

The more we do this, the more we get the message that the route has changed, especially when we gradually start to feel the cumulative effect of treating ourselves as valuable, worthwhile and good enough right now, deserving of our own love, care, trust and respect and are not prepared to ride on the Crumb Express in someone else’s life.

We don’t have to engage. We are not contractually obligated to jump to other people’s beats, to cater to their drama, to be typecast by our pasts, or to continue a toxic family pattern. We don’t have to engage. We have choices and when we engage in the stuff that runs counter to our happiness, we often end up feeling powerless and having other people make our choices for us.

We get to choose which trains we ride on but first we have to choose and then keep choosing. We have to also pay attention to ourselves and listen and be willing to adapt.

It takes a lot of effort initially because we’re learning a new route and replacing old habits and sometimes it’s ‘easier’ to be a passenger and ride the train to unhappiness. But if what we’re doing doesn’t make us happy, continuing to do it isn’t going to change a damn thing. If we don’t adapt the habits that inform how we respond in certain types of situations, we’ll continue to use the same thinking and behaviour that has contributed in part to our problems. Ultimately we’ll be presented with situations, ‘opportunities’, thoughts and feelings and each time we’re given a fresh opportunity to react differently or at the very least hop off the train as soon as we recognise that our boundaries and sense of self are taking a knock.

Take responsibility for evolving your boundaries, not for other people's behaviour
How Attempting To Get The Wedding Dress I Paid For Gave Me A Crash Course In Shady Relationships
People-pleasing and the fear of 'inconveniencing' others