Are you overfeeding your worry and fear ‘goldfish’? 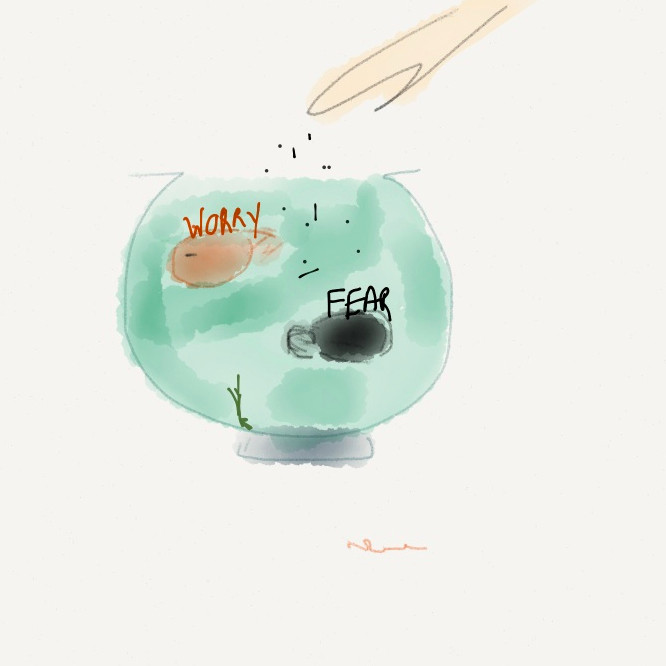 We have a pet goldfish, Sophie, who Em would overfeed given half the chance because it’s as if every time she rustles around in the bowl when she sees him, he interprets it as a sign to feed her. Goldfish don’t know when they’re full so they will eat and eat and eat and Sophie along with Yella and Goldie (rest in peace fishies – the girls sang Someone Like You for their funerals) seemed to know how to hustle for food.

Worry and fear are like goldfish – they’ll eat most or all of whatever you feed them and will keep coming back for more.

They don’t say ‘Thanks but I’m full mate’ and turn away, so you have to be the disciplined one and learn to recognise the emotional, mental and physical signs of signs along with what they’re impacting on in your life.

When you’re not used to backing you, fear and worry tend to have a bigger voice than you. You have to be the one to know your limit or you’ll overfeed ‘worry fish’ and ‘fear fish’ and possibly even ‘harsh critic fish’, ‘rejection fish’ and anything else you want to throw in that can detract from your self-esteem. There isn’t much room for love and happiness when you’re overfeeding negativity.

When you’re a worry and fear feeder, you chase the thoughts and feelings.

It’s the whole ‘I had this thought so I’ll attribute X meaning and chase after it with other thoughts’ and next thing minutes, hours, days or even weeks and months have gone by. Not all thoughts are facts so you have to be the one to do the working out and choose what to feed.

I’ve been a worrier most of my life but have learned how to wind my neck in because given half a chance, I can imagine all sorts of crazy scenarios in my own multi-series boxset of Dynasty. If I allowed myself to worry about every possible thing that could happen to my daughters, not only would I miss out on the present with them but I’d probably lock them in the house and teach them to be fearful at the same time.

When I talk to people who have been worrying about something for anything from months to years, that’s where the whole living in the past or spending too much time trying to anticipate what’s next (likely forecasting something going wrong) means that they haven’t been mindful enough to recognise that their concern is either unfounded, exaggerated, or genuine. With the latter there’s no acting on knowledge of what is happening in the present so of course their anxiety increases, especially if they’re trying to imagine out the future to the nth degree. Feeding, feeding and more feeding.

Whatever you’re worrying about – whether it’s actual or potential problems – you’re being put in the position of having to make a choice between dwelling and acting.

It’s not that you shouldn’t evaluate a problem but there’s evaluating by considering all known information and gathering any other additional information to fill in gaps, reaching a conclusion and making a resolution aka going through a thought process and making a decision, and then there’s just ruminating.

Being afraid is having an emotional response to a perceived threat. When we worry about this threat, we don’t stop to consider whether we are worrying about something that isn’t happening but we think could happen or whether we’re actually ignoring knowledge. Typical example: ignoring red flags while claiming that you’re afraid of what you’re ignoring or even afraid of something else that isn’t happening.

Feeding the worry and fear fish becomes a vicious cycle because you worry about making a decision full stop and then you worry about making a ‘wrong’ decision. Sometimes you recognise that the decision is ‘right’ now but you worry it might be ‘wrong’ in five years time – this is ignoring the fact that based on the present and the past you still need to act. Next thing five more years have gone by and your perspective hasn’t changed and you’re struggling with regret while still worrying but not acting.

All of this analysis paralysis pollutes your proverbial tank water while distorting your perspective.

Your fishbowl or tank has a limited capacity so you’ve got to choose who you want in your tank because trying to have your self-esteem in there along with worry and fear is a recipe for pain. They’re greedy and will deprive it of nourishment.

Learn to recognise what sets you off – cues (signals) or triggers (an event/something that sets you off) – along with your typical anxiety and worrying responses which may be ruminating, procastinating, cleaning, working, avoidance, discussing something to the nth degree, contacting your ex, drinking etc. Try to be specific – I go on a cleaning frenzy / My mind becomes super-busy and I can’t concentrate – because awareness of what sets you off, why and how you react starts to give you more control plus you can learn how to calm you. It’s amazing what calmly explaining to you a more accurate version of events or reassuring you can do.

I’ve found that a middle ground between staring at worry and fear and at the other end, trying to avoid the feelings and thoughts by feeding them with unhealthy distractions, yields the best results. Come back to it later. Take a break. Channel your energies into something else (healthy though). Think about the things that you know that you can do for you that will calm you, comfort you and lift your spirits even though the problem isn’t necessarily ‘solved’ – you will feel better equipped to troubleshoot and handle it though.

Maybe jot down anything that pops up so that you can address it later. You may end up coming back energised with a fresh perspective. Also try writing out the problem (real or potential) as it will help to organise your thoughts and hit upon what’s really bothering you. What you don’t have to do is feed the worry and fear with more worry and fear so decide what your limits are (back to boundaries again) and focus on how to manage the impact of these on your life so that you remain in charge.

PS Try Headspace (lots of BR school students use it) as it’s full of tips and tools (videos and an IOS and Android app too) for practicing mindfulness and a number of people have come back and told me how much better and in the present that they’re starting to feel.

Knowing When To Fold: Bad Investments in Relationships & Seeing The Bigger Picture
Is It Time To Get Off The Rehashing Express?
Podcast Ep. 1: Are you doing it for the right reasons?
Share this...