12 Core Boundaries To Live By in Life, Dating, & Relationships 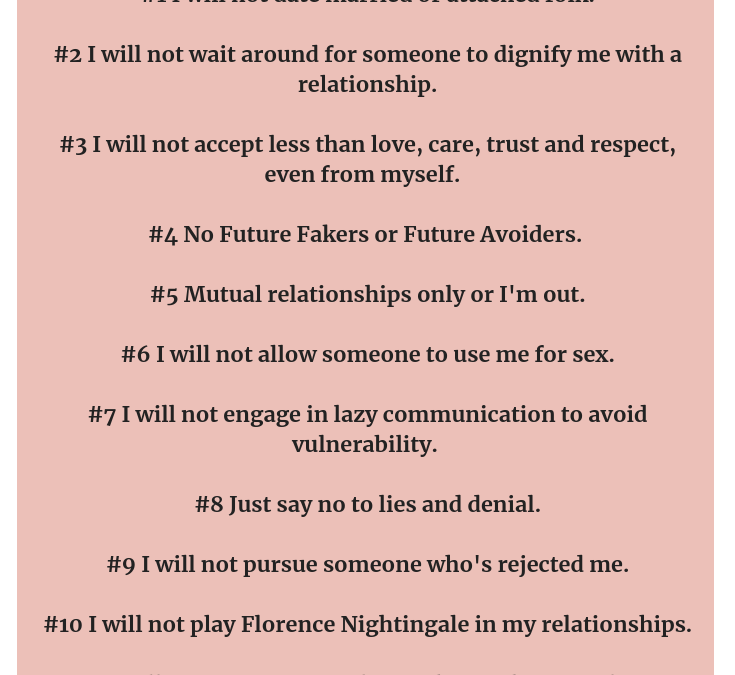 Over the past few years, I’ve written about boundaries, your personal limits of what you will and won’t put up with, many times. Often, people understand their importance but fear them nonetheless. Blurred or absent boundaries means that you will put up with anything in the name of getting love, attention and validation. However, actual love and a healthy, decent relationship never requires you to have no boundaries. So I’ve put together 12 core boundaries that every woman, in fact, every person should live by.

1. Under no circumstances will I date a married or attached person.

This also rules out just separated, long-term separated with no actual divorce on the horizon, and those who are not over their ex. You are not a buffer/emotional airbag. You’re not someone to pass the time with while they figure out what they do and don’t want. The moment that you involve yourself in any of the above situations, they know that they don’t really have to do anything. If they lie to you and let you think they’re single, abort mission.

Also, lender beware. Don’t accept a situation where you are sharing your partner, whether it’s because you turn a blind eye to their cheating, or because you keep taking them back once they’ve got whoever turned their head out of their system. This brings me neatly to…

2. I will not spend my time waiting around, whether it’s for their calls, or for them to show up after they’ve disappeared.

When a man is interested, you are in no doubt about their interest. And they don’t run the risk of losing you.

You have to stop acting like every guy could be the one and like there’s a fire (there isn’t). You deserve better than someone’s half-hearted interest, and there’s no excuse for any man keeping you waiting around. He snoozes, he loses. The sooner he experiences this, the sooner he learns to treat the women he dates with more respect.

This also means you will avoid being in barely there, non-relationships.

When someone’s interested in you and wants a relationship, you know you’re in that relationship. It’s not ambiguous or a secret.

3. I will not continue engaging in any relationship where either they (or I) don’t treat me with love, care, trust, and respect.

Start as you mean to go on. Even though love is not there from the outset, there is no excuse for someone not to treat you with care, trust, and respect. Integrity and decency matter. By the same token, if loving them means you can’t love you, always choose you. Do not erode your self-esteem by disrespecting yourself in a relationship. If you don’t treat you decently, others won’t. This is a fundamental part of having boundaries. If you can’t date with self-esteem, don’t date until you can.

4. I will not continue dating someone who reveals themselves to be a Future Faker or a Future Avoider.

Whether they tell lies about the future to get what they want in the present or they just refuse to talk about the future, halt. If you’re involved with Pinocchio or someone who is too commitment-resistant to make plans, cut them off as soon as this becomes evident.

Some people just can’t help but talk themselves up a storm at the beginning. They believe their own hype and overestimate their interest and end up making promises they can’t and won’t deliver on. Watch how quickly their personality switches or they disappear when they’re expected to deliver. Don’t waste your life waiting for them to become the Person They Were In The Beginning.

5. I will not date someone who controls the relationship on their terms. I must be in a mutually fulfilling, balanced, loving relationships.

If you’re not on an equal footing in the relationship and one person dictates the temperature and pace, deciding what does and doesn’t happen, it’s an unhealthy relationship. You’ll know it’s on their terms when you try to instigate your own or balance things out. They’ll shut down/disappear/get confrontational or pretend to agree and then revert back to doing their own thing.

6. I will not allow someone to use me for sex, devalue me sexually, or treat me in a less than manner.

It’s your prerogative to have casual sex, but only do it it’s what you genuinely want. Don’t use it as back-door entry to a relationship! And if you’re catching feelings, it’s not a casual relationship anymore. You can’t work your way up from booty call to girlfriend. Likewise, if your relationship is all about the sex and you want more than this, opt out. Don’t let someone use you as a sexual plaything or degrade you. You must have limits.

7. I will drop guys who manage the bulk of the communication in our relationship by text, email, or instant messenger, like a hot potato.

There’s no excuse for this lazy communication, and it’s the hallmark of emotionally unavailable people who want to keep themselves distant. It’s not modern relationships and dating; it’s modern booty calls and half-hearted interest. It says “I’m not interested enough to make a proper effort “.

8. I will not allow lies to foster my interactions.

Whether it’s being in denial or listening to bullshit, being fed lies, or getting the truth distorted, don’t accept it. Feet in reality, shed the fur coat of denial and stay on a Bullshit Diet. Don’t let anybody drip-feed you the truth, twist it around, don’t accept it. If you do, they’ll think they have license to keep lying. People who have integrity and respect you don’t lie to you.

9. I will not pursue someone who has either directly or passively rejected me.

You know when someone isn’t interested or is half-hearted. You know when they’re using you for what they can get, or have outright turned you down. If they were interested, you wouldn’t still be chasing them!

This means no pursuing after they’ve turned you down or been half-hearted in their interest. If they can’t be bothered to call, lose their number. Definitely cut them loose after they’ve shagged around on you pitted you against other women. Certainly, no chasing someone to convince them to be interested. You have more self-respect than this, and you don’t need to be the equivalent of a used car salesperson forcing yourself on someone.

10. I will not play Florence Nightingale. It’s not my job to fix/heal/help the Walking Wounded!

This means no partners with substance dependency/abuse and no partners that have issues that prevent them from healthily engaging in a relationship.

Everyone has issues but there’s baggage, and there’s b-a-g-g-a-g-e.

Let them sort out their own problems and don’t hide behind theirs. Always acknowledge the code red alert (red flag) that is a dependency on something or emotional/behavioural issues that prevent a healthy relationship. Ignore it, and you’ll make the ill-advised assumption that your feelings cancel out your concerns. They don’t.

11. I will not date an assclown: someone who is unkind/cruel, lacking in empathy, and at best takes advantage and at worst, abuses me.

When someone treats you poorly, it’s not going to get better because you claim to love them. But it will get worse if you stick around. Check out my post on red flags as well.

12. I will not make up excuses for other people’s behaviour or make exceptions to my boundaries. My boundaries are non-negotiable!

Don’t treat your partners like children even if they act like it. Don’t make it up as you go along either and come up with your own reasons for why you think they behave as they do. That’s projection. Others know the line when you know the line. But do not make exceptions because you will keep lengthening your yardstick. This guideline also applies to when they ask you to make an exception to your normal rule of behaviour. Someone who genuinely has your best interests at heart will not expect or demand that you do something outside of your boundaries and values.