Buffers: When You’re The One That They Turn To When They’re Unhappy With Their Current Relationship 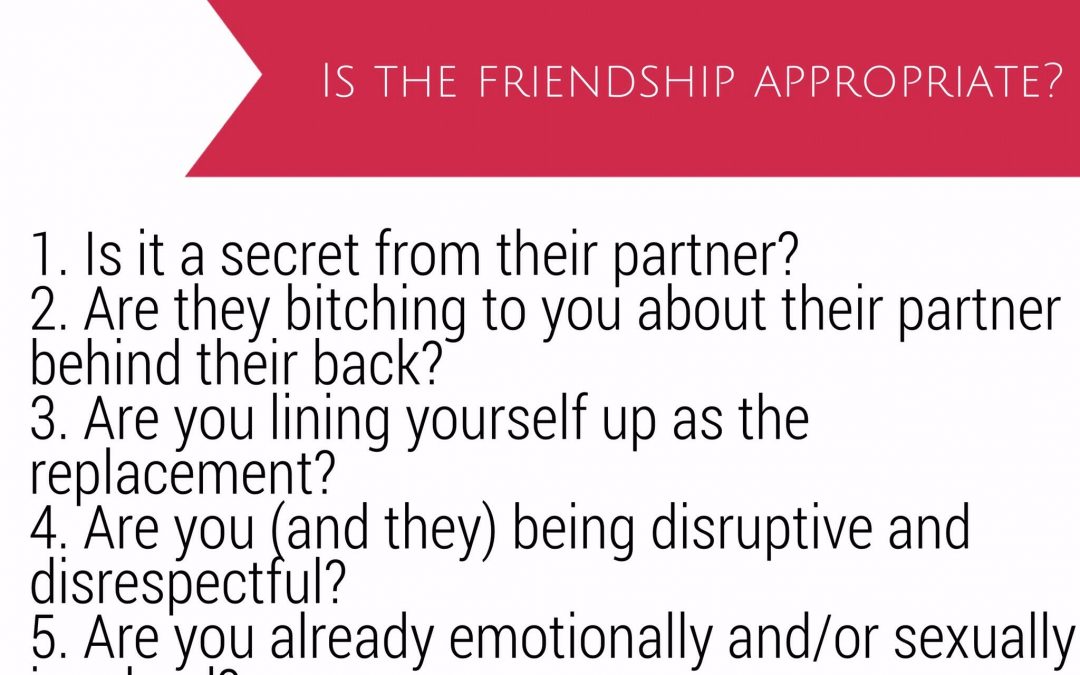 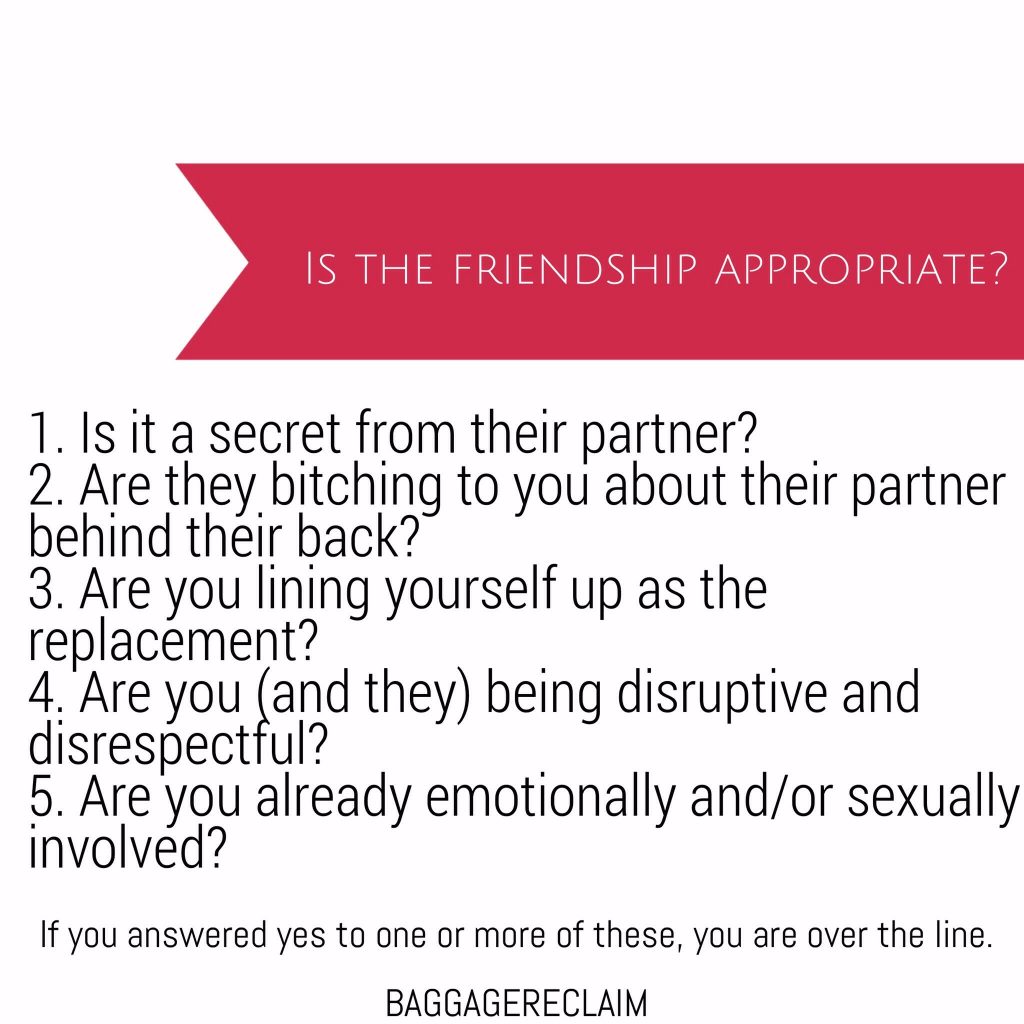 We are creatures of habit and have to pay close attention to where there are running themes in our lives because it points to where we are not only repeating a pattern of thinking and behaviour but that we’re doing so because we’re getting something out of it.

A recurring theme that some Fallback Girls/Guys experience in unavailable relationships is being the person who lends a willing ear, a shoulder to lean on, and even a bed to lie in for people who are having doubts about their current relationship, who want to have a bitch and a gripe about their partners, and who essentially want to avoid their problems by enjoying the attentions of an interested but nonetheless inappropriate party. It may be that you have the label of ‘friend’ but tend to be disruptive in this person’s relationships, believing that you have the right to do so because you’re friends and that anybody who doesn’t understand this and hold back comment about it mustn’t be right for this person. You may feel quite territorial about the friendship and struggle to step back. You’ll let them know that you’ll be there when not if something goes wrong.

If any of this sounds familiar, you’re a Buffer – someone who takes up an emotional airbag role with a view that once you’ve shown how indispensable and supportive you are, they will get over their ex and choose you. Buffer means rebound relationship territory. You have The Replacement Mentality so you tend to see your way into involvements as you effectively replacing somebody who couldn’t do their ‘job’ properly.

You listen to people gripe about their partners or expounding on their frustrations about dating and relationships and you think, I can love you better than she/he can (now have the Mary J. Blige and Lil Kim song of the same name stuck in my head) or your mind starts calculating what adjustments you need to make so that you can position you as the ideal partner.

Some people would feel super uncomfortable being around somebody who is disrespecting their partner to them but instead you want to get closer. On some level you feel flattered.

You’re a People Pleaser and end up losing yourself on the quest to be what you feel is the ‘right’ person so that you can be chosen. You try to be indispensable even though it costs you deeply and can have you competing.

If they say that they were misunderstood / that they were turned down for sex / that their partner is “needy”, then you vow to make sense out of nonsense while being an armchair psychologist, vow that you’ll never deny them anything and that you’ll also be the person with no needs who avoids conflict and criticism.

You may think you’re being ‘helpful’ with your brand of support when they talk about their partner or you shelter them from their responsibilities but it’s disruptive and does cross boundaries. You may not see what a gross betrayal it is for them to be going behind their partner’s back because you’re so focused on being needed plus the sympathy and over-empathy you’ve built up shields you from acknowledging what’s really going on.

One day you wake up and realise that you’ve spent much of your adulthood being the girl/guy who gets friend zoned and/or used for an ego stroke, shoulder to lean on and possibly a shag if it gets that far, only to be told that they can’t leave or that they’re going back to their ex or that they now have clarity that they like someone else. Yeah, thanks!, you think as you grit your teeth and wonder what the hell they have that you don’t. And then lather, rinse, repeat.

Now if this is you and you want the cycle to end, it’s time to have a very honest conversation with yourself because for some reason you like the role of being The One That People Turn To When Disgruntled With Their Current Relationship. You have an eye on a future reward – in exchange for your investment, you expect to be chosen.

There is something about listening to somebody gripe about their partner or talking about something that they’re not talking about with that partner that ‘activates’ and in fact motivates your interest. It makes you feel special because you derive your worth and sense of purpose from being needed in this way. For some reason that is no doubt connected to a past experience or a lack of self-confidence connected to poor self-image, your ego relies on knowing that you are being chosen over someone else. That the person goes to inappropriate lengths to be with or around you. You may reason that if they were being treated ‘right’ that they wouldn’t be talking to you (not true). You feel flattered that you’re the one they choose to confide in or even escape with. You think any code amber or red issues are situational and will disappear with the right person (you). Where is this all coming from? What are you trying to right the wrongs of the past about?

One reason I’ve seen crop up time and again is that it’s like having the cool guy/girl at school choose you to confide in instead of their super popular (and possibly mean) girlfriend/boyfriend. In fact, the partner in these stories is assumed as and cast as the meanie. It validates that part of us that feels inadequate, unattractive or unpopular. We can tell ourselves that they’re coming to us for substance….but then we feel even more rejected and not good enough when it doesn’t work out.

Here’s the thing: You don’t have to rely on what you feel is someone else effing up or for a person to feel dissatisfied with their current partner, for you to feel as if you now have a chance to shine. You don’t have to see these as your ‘opportunities’.

Whatever beliefs you have that keep you in the wings ready to activate your emotional airbag and understudy role, they can be changed so that you stop limiting you to only being interested in people who rely on you for an ego boost and to effectively Dump and Charge Up – after unloading on you and enjoying your pleasing ways, they feel rebooted and ready to go back to the status quo or decide that maybe they can do even ‘better’. Halt these pseudo friendships – you wouldn’t want to be on the receiving end of it. Don’t sell you short by playing third wheel.

Stop letting fear of uncertainty hijack your happiness
Myth: There Are No Good Men to Date - Part One
He's with someone else - Why her and not me?