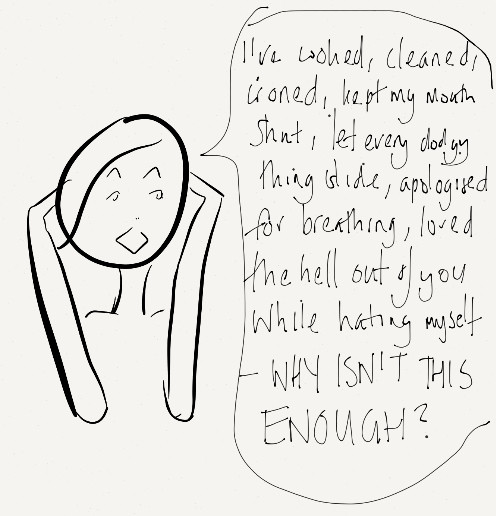 Over the years of writing Baggage Reclaim, I’ve heard from many thousands of people who have essentially ended up inadvertently falling into the role of housekeeper, nursemaid, chauffeur, bank manager, secretary, babysitter, mama, papa, armchair psychologist, emotional airbag, masterchef, rehab counselor and the list goes on. When we’re inclined to be people pleasers, we suppress our needs, expectations and wishes and devote our time, energy and emotions into pleasing others so that we can be approved of, loved and in many ways, yes, indispensable. We can feel so unnecessary to ourselves that rolling into a doormat via people pleasing is how we feel vital in people’s lives.

Now I’m not for one moment suggesting that it’s ‘bad’ to do things for others but – and I want you to hear tires screeching or the needle being ripped from the record – when we attempt to make ourselves ‘indispensable’ as a means of showing our love and to also ‘win’ people over, we end up being deeply compromised and very much unappreciated, and what we are appreciated for, is for all of the wrong reasons.

And here’s the kicker: making you indispensable in these ways isn’t a means of being more emotionally open and demonstrative. Suppressing your feelings, opinions, needs, etc, is going to do anything but help you be emotionally available and honest. You’re doing too much pretending for that.

When we go down the Let Me See If I Can Find One Million and One Ways For You To Not Have To Lift a Finger In This Relationship route, it appears ‘easier’ than 1) respecting ourselves and letting things unfold so that we see whether the other party steps up and 2) having to truly put ourselves at ‘risk’ of vulnerability and be more honest with ourselves about what is going on. Both options would ultimately require us to hear, see and to more importantly, act.

I remember many moons ago when I was living with my ex fiance. I knew something major had shifted – I may have had shite taste in men but my ‘ole spidey senses were rarely off (when I heeded them). It literally felt as if the sun had been out in our relationship (with the ‘occasional’ light to heavy rain, thunder and storms) but now there was just darkness with occasional brightness. In previous times, I’d covered the cracks by fussing around, apologising even if it meant making his apologies for him.. and sometimes cracking out the underwear and making out like I was having the most amazing time of my life in bed, when really, it was beginning to feel like putting in a little bit of a debt payment and maybe giving away a few goods (you know like when people give away a valuable to help towards the debt) to keep the inevitable off my back.

In realising that something serious had gone awry and him at one point even saying that he was done, I pulled out the big guns. I tried to keep the place squeaky clean, I cooked, I attempted to master ironing as if I was a dry cleaners (I left more lines in his shirts than a tube map according to him), I tried to be more agreeable (read: mute), I tried never to turn the blinds in the wrong direction…, I let my coursework nosedive, I was probably being a right brown-noser…and basically I finally lost touch with me.

And you know what? Nothing was ever enough.

With the benefit of hindsight, I can see now that I used being indispensable in these ways as a substitute for having to do the emotional work on my end in the relationship, which was even as simple as seeing the two of us as individual entities and recognising the unhealthiness of our relationship and my own issues. I thought that by making myself ‘necessary to him’ that he had no reason to leave but 1) I had plenty of reasons to leave and 2) he could hire a cook, cleaner etc. You lose respect for you and they lose respect for you plus it all gets a bit blurred around what role you play in their life.

As a child I learned how to read a room as well as people’s moods – tension as well as even the slight possibility of drama or being disapproved of, were my cues to jump through hoops. Hell, as a teen, doing chores and sucking up when there was a mood change was how we rolled. Problem is, I was never going to have a mutual relationship with love, care, trust and respect by thinking and behaving in this manner. Ultimately nothing I was doing was actually addressing the problems and I was also making myself indispensable to somebody who drained me.
Being indispensable in your relationships, romantic or otherwise, is the fast track to becoming responsible for everything in the relationship. Unsurprisingly, you’ll be expected to be indispensable on the blame front too plus let’s be fair, because you’ve practically broken your back being a doormat and it’s still not enough, you’re bound to feel like it must be something that you’ve ‘done’ because surely if you’re doing all of this stuff, you should be appreciated? Right?

I’ve talked numerous times about overgiving and people pleasing, especially when you do the whole ‘good girlfriend’ / ‘good boyfriend’ thang to try to get people to give you what you want. Unless being indispensable is how you roll and you are doing it out of the goodness of your heart (yeah, you’re probably expecting something), don’t go down this road.

If that ‘something’ is why you’re doing all of this to create a tipping point with the other party, take this as your code red alert that this is not mutual because you don’t feel and act equal.

Once you’re more honest about why you feel and act this way, you can acknowledge and address any issues plus it’s the first step to acting with self-care, because you shouldn’t be putting you through an emotional mincer in order to feel worthy or to cling onto a relationship that may actually be compromising you. Love is an action but if your action is people pleasing, you’re cutting the self-love out of your life. That and you’re sheltering the other party from their responsibilities and their own actions – that’s not love.

Often we do this stuff because on some level we believe that it ties them to us. It’s why I hear from people who end up financing someone shady, or repeatedly taking them back despite dodgy treatment, or trying to fix/heal/help with their Florence Nightingale ways. On some level they’re thinking, If I’m doing all of this, they have no reason to leave. Sometimes they’re thinking, I did ________ and put up with _______ so they can’t leave. They owe me!

You owe you your own respect.

Does this even feel good to you? Or do you feel afraid, taken advantage of and marginalised? Relationships shouldn’t involve making you a slave to someone on a throne in your mind. You are vital to your own well-being and there’s no point starving you while overfeeding someone else in the hopes that they’ll throw you back some scraps. They’ll waste what you give.

Don't Let Empathising With Circumstance Turn You Into An Emotional Airbag
How to say no when you don't have the bandwidth to say yes
Boundaries in Relationships: Understanding Your Personal Electric Fence