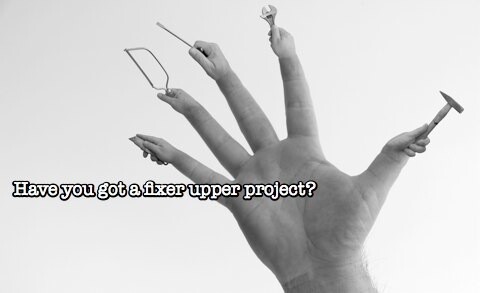 In this excerpt from the new edition of Mr Unavailable and the Fallback Girl, I explain the very tricky territory of fixing, healing and helping and how your need to be needed and trying to be the solution to problems that aren’t yours to fix, backfire and leave you feeling anything but loved.

Right now there are millions of women dating and in relationships with men that they 1) weren’t that interested in to begin with but thought they could change them, 2) were interested but had to turn a blind eye to some stuff and thought they could change them, and 3) were mostly interested in the purpose of fixing/healing/helping them. What this tells you straight off the bat is that many women end up in unsatisfactory relationships because they knowingly choose partners they deem as having ‘faults’ or ‘issues’. They believe that if they ‘give’ and ‘love’ that this will give them the power to change their inadequate partners and be rewarded with their love.

Unfortunately, believing that you have superhuman powers is what has you repeatedly returning to the same relationship crime scene, going out with the same guy in a different package, and taking on fixer-upper projects that leave you hungry and hurt. I’m a big fan of TV shows like Property Ladder, Grand Designs, and Location, Location, Location, which deliver an important message that you should remember throughout this chapter and the rest of this book: it’s all fruitless unless you get Return On Investment (ROI). You cannot take any man with any problems and treat him like a blank canvas and magic up the relationship you want, because it’s like trying to turn a pig’s ear into a silk purse – a very bad bet.

What’s the difference between the woman that ditches men because they don’t meet her stringent criteria and the woman that instead of ditching, focuses on fixing and healing? A slippery slope.

When you choose men that you believe need fixing and a makeover, you’re a Renovator. Relationships where you secretly or even openly put yourself on a pedestal are your preference because underneath your critical eye and controlling ways, lurks low self-esteem. You figure that he’s not right for now, but that if you give and fix, that you’ll be rewarded with a committed relationship. Disillusioned with dating and scared to put yourself out there with the type of men you’d prefer, you think you’re playing it safe and then Mr Unavailable turns the tables on you.

With the rehab route, you’re a fixing/healing/helping Florence Nightingale that needs to feel needed. His problems give you a purpose, and you believe that if you love enough, even ‘major issues’ can be overcome, for you. You make yourself the solution to problems that aren’t yours to fix and that require more than love and a woman to resolve. You’re often righting the wrongs of the past as a parent/caregiver tends to be very similar to your partners, and with your low self-esteem, you think a man with problems will be grateful for your love and reciprocate. Having no idea how to meet your own needs, you become frustrated at being deprioritised and your own problems go unaddressed as you’re always distracted. You want to make everything better, but you’re actually making things worse.

Renovators can pretty much date any Mr Unavailable or even a decent, available guy and try to fix and make him over, but you tend to be with Opportunists, guys who get involved because you serve the purpose of being useful. On the take, they have little or no regard for your feelings, and because of your renovating ways, they see it as their right to exploit the situation. Florences end up with Woundeds, men with excess baggage in the form of emotional and behavioural problems; addictions such as sex, gambling, alcoholism and drugs; and in some instances they may even be abusive. Whatever their problems are, they completely affect their ability to be in a relationship.

Some people run in the opposite direction from relationships where it’s apparent that the person isn’t what they want or that they have major issues that make a relationship a no-go area, but not you. You either seem to think you can bulldoze your changes on any man or you refuse to see problems for what they are. You don’t see a man that you don’t really fancy, respect, value, or accept, and you don’t see a man with more baggage than all five terminals at Heathrow. You see opportunities.

You may not be conscious of it, but there’s a Bingo Moment when you first become involved with a guy where you see, hear, or perceive something that causes you to ‘click’ into place and feel that you have a purpose and opportunity to be needed. You have your eye on the prize and the reward. The idea is that you invest yourself into a relationship no matter how lacking or dangerous, and in knowing that he’s not actually the Catch of the Year, much less of the century, you expect that he’ll almost bask in the glow of a woman like you and it’ll be like “Wow, a woman like her wants me to better myself or is willing to be with me in spite of my humongous luggage. I will love and worship her!” You’re trying to live out a very f*cked up princess and the frog tale.

The reality is altogether different. There’s no prince hidden in your fixer-upper/pet project and Mr Unavailable never has the same agenda as you and does things on his terms. While Opportunists and Woundeds may initially be flattered by your interest and ‘love’ and even appear to make some changes, eventually they do rebel, they do blow hot and cold, and the bait and switch takes place where suddenly a relationship that you felt in control of, is very much out of your control. This will boggle you. You’ll wonder how even this man with all the changes he ‘needs’ or glaring problems can’t love you and you’ll also wonder how he’s running rings around you.

These relationships go one of three ways: he moves on and someone else appears to reap the rewards of your effort, he stays but refuses to change so you end up living in Misery City, or he leaves and remains the same anyway. What I can assure you of is that this relationship is doomed regardless because this isn’t love; it’s control and as you’ve already discovered, messing with Mr Unavailables is one big painful adventure in attempting to control the uncontrollable.

Your thoughts? Download this exclusive excerpt which also includes a list of typical characteristics of Renovators and Florences.

How Bad Do Things Have To Get?
Passive Aggression in Relationships Part 2
If You're Being What You Think Is a 'Good' Girlfriend/Boyfriend, Are You Actually Being You?