They Had A Life Before You. Acknowledge The Backstory. 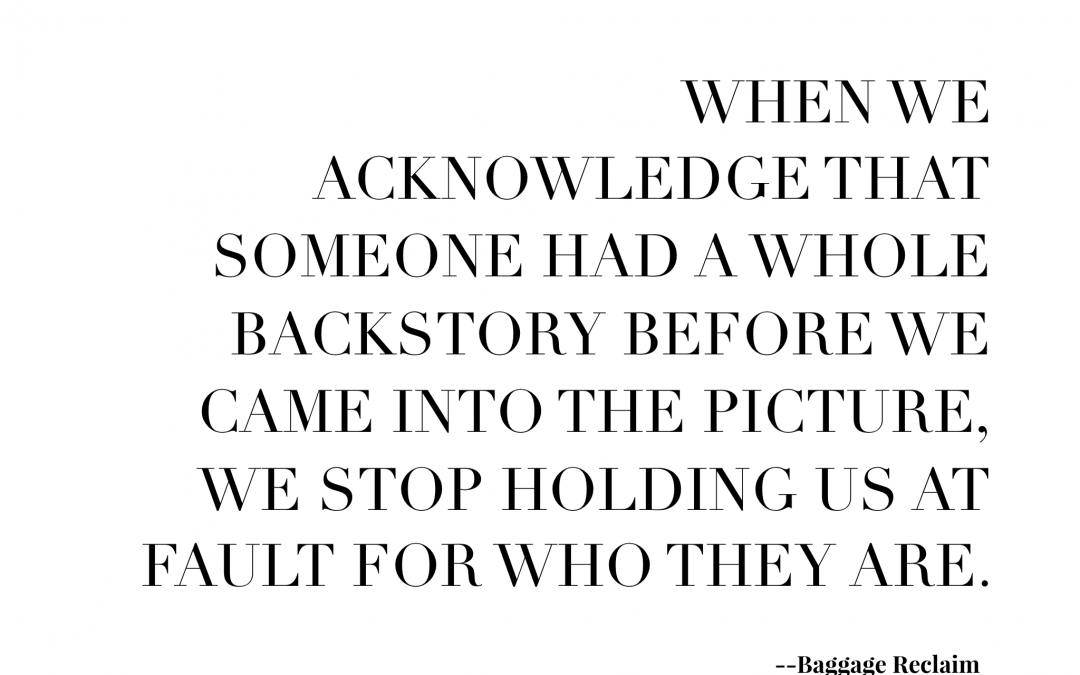 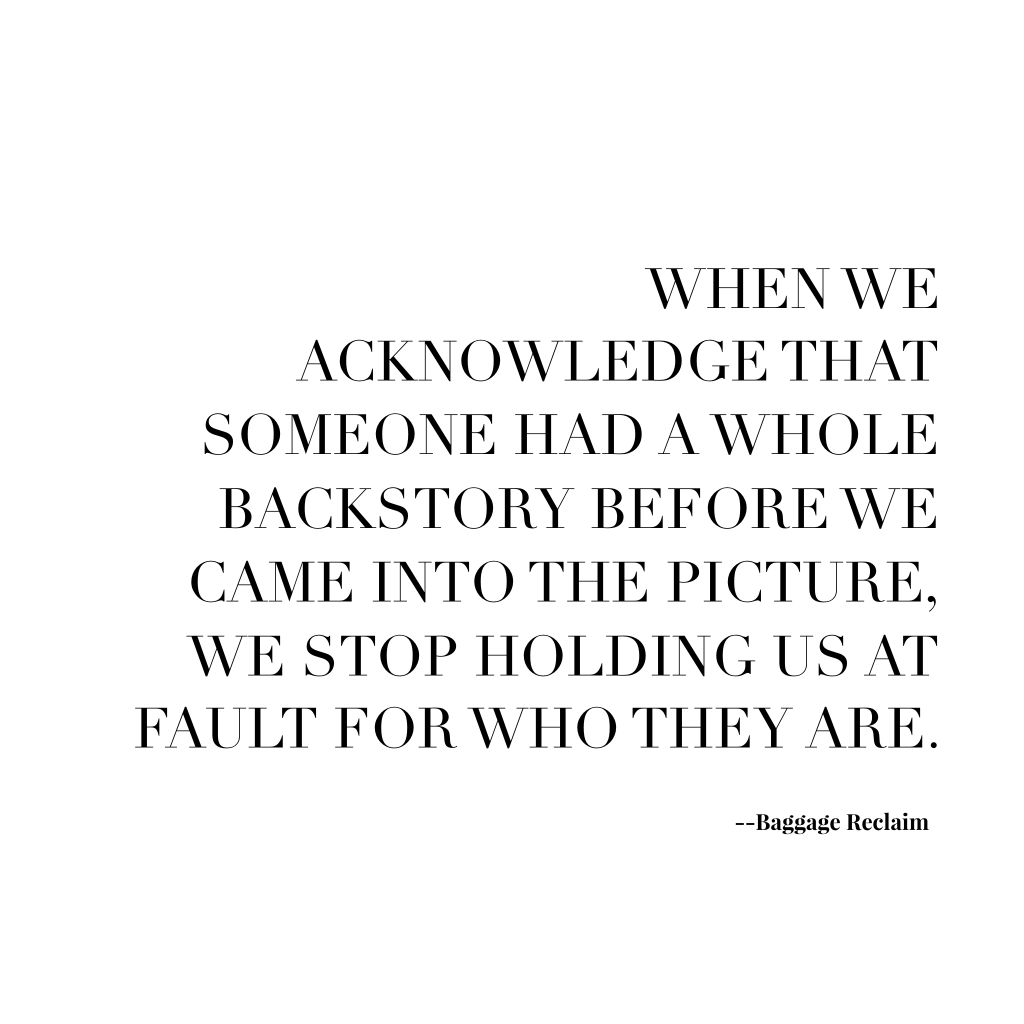 Sometimes we become so consumed by our involvement with someone that when it ends, we lose sight of the fact that this person existed before we came along. We spend weeks, months or even years torturing ourselves over the “what ifs” and feel shortchanged and even wronged that they couldn’t become who we wanted them to or who they promised to be. It doesn’t matter if one hundred exes came before us or what their backstory is; everything they are or aren’t now seems to hinge on our worth and our supposed actions.

When people say to me, “But Natalie, why haven’t they called? Why didn’t/couldn’t they change? Why don’t they want me?”, I remind them of the biggest truth that they’re steadfastly forgetting: This person had a whole life before you. They didn’t just fall out of the sky and land into your life ready to play a part.

A typical example of this scenario is when we get involved with somebody who even if they’ve been married, they never stopped dating or they were not a committed, emotionally available partner with their ex(es). We rock up and carry on as if we’re supposed to get the best version of them. What we don’t often admit to is that aside from expecting to be the exception, we on some level believe that it’s the fault of the former partner/spouse when somebody is not a truly loving, giving partner. We believe that their exes weren’t doing enough and that things would be very different if the right person came along who knew how to love them right. Of course when this person doesn’t change or even behaves worse, we blame ourselves.

The question we have to ask ourselves when we’ve been hellbent on peddling a narrative where we have determined that we have failed due to our self-worth and even that we have been wronged by our hopes and expectations not being met is: Why are we owning all of their pain and problems?

We also need to question why it hasn’t occurred to us that there are other people before us who have experienced disappointment with this person and blamed themselves. Why is it that we are The Biggest Loser of Them All? Why does our involvement with this person black out everyone else?

When we keep peddling untruths, we grapple with a host of negative feelings and it all stems from one of two premises:

1) Lying to ourselves that this person was ‘perfect’ and then we came along and screwed them up and effectively provoked them into disappointing us, or

2) Knowing all along that they were not perfect (none of us are incidentally) and that there were certain unignorable issues and factors that we either pushed aside to promote the fantasy or that we felt entitled to change due to what we felt we were doing or giving (or more like sacrificing) in the relationship.

We run into a lot of problems when we get hung up on what we expect from people instead of accepting the truth of who they are.

The same untruths that we beat ourselves over the head with about a romantic partner, are the ones we punish ourselves with about a parent. As children, we have an innate sense of how we think that we should be parented, of what a mother and father should act like and when they don’t, we assume that this disappointment is a direct reflection of our inadequacy. Again, even though we may be well into our adulthood, we neglect to recognise that our parents are people first and foremost with a whole backstory that existed before we came along and who felt, thought and did things that were outside of their direct interactions and overall relationship with us. They weren’t here purely for our consumption.

Take me: Much of my life revolved around my absent Mr Unavailable father and a few months back I heard myself saying, “My dad this and my dad that”, only I was around my siblings and it struck me: He’s not just my dad. He has other children, he’s a son, husband, brother, grandfather, friend, ex-boyfriend, ex-partner and the list goes on. That doesn’t in any way diminish my relationship with him or invalidate the earlier pain of abandonment but it has proved to be liberating to recognise that it’s not all about me. As much as I have struggled over him, the truth is, I’m not the only one and there are better ways of feeling special than me continuing to promote the lies that have hurt me. I’ve also struggled a hell of a lot less since I stopped lying to myself about him.

Much as it might feel as if we started living and breathing when we became involved with a certain someone, the truth is that we each stepped into the other person’s existing life.

As humans, we want and need to feel important but sometimes the way we go about doing so distorts and compromises our relationships. We also place unrealistic expectations on ourselves and others. We like the idea of arriving into someone’s life and no matter who they were before, making them someone different. We expect them to give us what we want because we think that we’re being or doing something that will create that tipping point. We, even if it’s unconsciously, try to be the exception to the rule. We focus on our expectations and then we feel hurt when people don’t live up to them.

One of the things that I say to people who are stuck on somebody not becoming what they wanted whether it was a romantic partner or parent is, imagine that this person had a whole different set of circumstances before you came along and afterwards, as well as different characteristics, resources etc, could they have been the type of partner/parent you wanted?

Write down all of the factors that would have allowed them to be the person you wanted and you have a whole set of reasons that don’t have your name on them. It acknowledges the key truth: it’s not about you.

Think about the journey that person was on before you came into the picture as well as who they are not who you’d prefer them to be, and it becomes clear why they haven’t called, changed or don’t want the same relationship. None of those reasons will be about your worth, you letting your guard down and not being ‘perfect’, or about one false move such as having healthy boundaries or not answering the phone on three rings. Acknowledge and accept the truth about this person and you start to acknowledge and accept the truth about you, finally allowing you to move forward.

Are You Painting Yourself Into a Corner? When Your Beliefs Remove Your Options
You're not the only one who's afraid of rejection
Acknowledge your blind spots around compatibility