Are you making you ‘special’ by being mean about you? 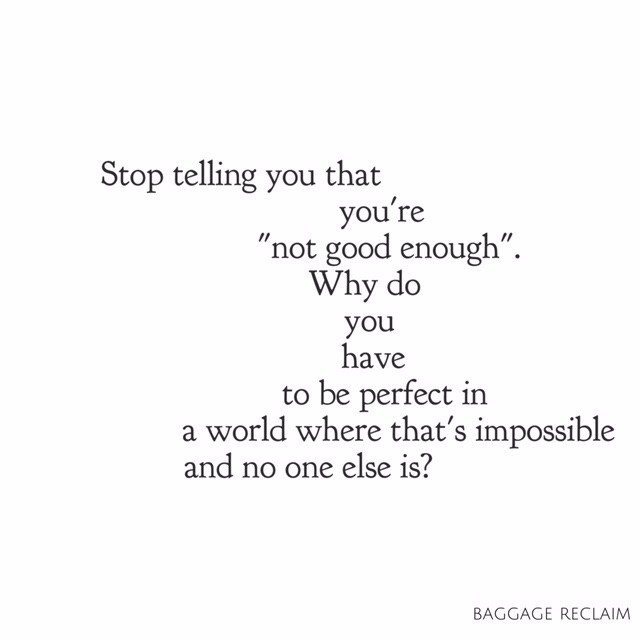 One of the things that we need to acknowledge when we insist on telling ourselves that we’re “not good enough”, is that coming up with reasons is ironically a way of making us ‘super special’ albeit we’re not exactly going about it in a loving way. The most negative narratives are all tales and reasonings based around us being singled out in some way. It’s the ‘inverted narcissism’ where we imagine that we have far greater powers than we do and continuously take the blame for other people’s feelings and behaviour (or feel as if it’s our duty to please them). We block ourselves to the truth because we only see things with the low self-esteem lens which provides a very narrow view.

When, for instance, we don’t feel too good about ourselves and we’re in a family with another couple of siblings, it is easier for us to say horrible things about us than it is to put ourselves in what we feel is a vulnerable position by standing next to them, so we accept failure from the outset and decide that they are “better than” us or “more loved than” us, so now we’re the odd one out, the one who always messes up, the ______ one, or the one who isn’t loved. We might talk about our family as if we’re the only one who struggled with, for instance, a parent, forgetting that our siblings or the other parent may have gone through their own experiences. Or, even if we acknowledge that we are not the only person who experienced problems, we just can’t help but try to make us extra responsible for how we were treated.

We’ve then carved out our own special space and we end dining off of these feelings and the injustice of it all.

When we spend time trying to uncover the origins of our beliefs or we start to question the authenticity and accuracy of them, we can encounter a surprising amount of inner resistance. We are attached to the security blanket of feeling inferior. We are attached to the story. As a result, when someone points out that we wouldn’t deride another child or person for the same thing, or that parents are not infallible, or we look at reframing that story with some perspective and truth, we can suddenly find that we’re digging our heels in, in subtle and not so subtle ways. It’s like, How will I be special if I don’t tell the story in this way anymore? How will I be special if I don’t make me out to be unworthy in the some way?

But why do we want to make ourselves special by beating us up and decimating our worth?

Here are some of the common narratives that people share with me around being ‘special’ in a negative way:

Here’s the thing: If any of these narratives sound familiar to you, sometime soon, you need to start recognising that you are already a valuable and worthwhile human being in your own right. Sure, you might feel ‘exceptional’ by telling you horrible things about you and bonking you on the head with the same stories and reasoning habits, but what you don’t ever feel when you’re doing this, is good. It is very hard to act like a person of value when you keep devaluing you and the more you push this narrative, is the more you will end up around people and in situations that reflect the way that you see and treat you. We accept mistreatment from people that’s in reality, only a little less than how we treat ourselves, so you must take command of your narrative.

You are the storyteller – if you’re going to pass down and repeat a story through the ages, make sure it’s a good one and make sure that you update it regularly to reflect a more compassionate and truthful perspective. It is not important to be right; it is important to be you. Would you rather be “right” and feeling bad or “wrong” and giving you a chance?

Challenge narratives with my free Unsent Letter Guide. Also check out the Get Out of Stuck ebook for deep beliefs work.

Dear So & So: Sorry. My heart/libido/ego/imagination says yes, but my self-esteem says NO
Criticism: Sometimes we're so busy focusing on the negative feelings that we forget to question whet...
Learning To Trust Again: You've Got To 'Put Out' Some Trust & Then Adjust Accordingly