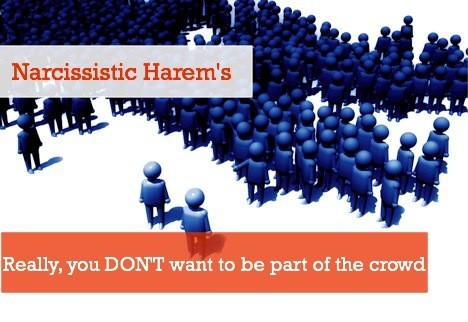 Many a reader has been left perplexed and even feeling rejected because they’re not treated ‘as good’ as a partner’s ex or their various hangers-on’s that stroke their ego. In turn, they end up devoting their energy to seeking a rather unusual validation that actually contradicts their other ‘challenge’ of having a committed relationship.

A ‘narcissistic harem’ is typically a number of people clucking around someone giving them an ego stroke.

Sometimes, in this day and age of distant and very lazy communication, you can be a harem member without even realising it just by being willing to play text ping pong with someone ambiguous or having brief interactions with people who you meet online. These are basically attention collectors. You’ll know them well if you’ve ever come across someone who practically lives on dating sites, or is constantly on Facebook being told how great they are by their ‘groupies’.

You’ll be familiar with your atypical harem chairperson, if you’ve ever been with an unavailable, commitment dodging person, who either collects friendships with their exes like medals, has a meddling friend or few, controlling family members, or when you start going out with them, every Tom, Dick, Jessica, and Harry seems to be breaking their neck to tell you how great they are or remind you not to hurt them, or is even reassuring you how they used to be a playa but they’re going to be different now. Some Cheaters even have harems that will reassure you that they’re definitely leaving their spouse or partner, giving them and you a false sense of confidence about the relationship.

It’s important to remember that someone who 1) is unavailable, 2) is trying to avoid being absolute in promising themselves to someone and acting like it, and 3) needs regular small, medium, and large sized bowls of ego stroking porridge to allow them to distance themselves from their feelings and actions, isn’t going to let it all rest on one person – that’s called commitment. For some, the more people they can collect attention from, the better.

Observing more than a few harems in my time has made me see that there are two types:

Saboteurs – These harem members often have designs on the chairperson and are also unavailable, possibly keeping your so-called partner as a backup plan for themselves or making themselves available for fallback duty. You are basically a pain in the bum. They put this person on a pedestal which actually only helps to foster a distorted view of reality. Family members won’t be helping if they carry on like no one or only an is good enough.

Saboteurs are like a fortress of an unavailable person’s own making and they are the perfect foil. When they think about why they haven’t managed to hold down a relationship, they’ll claim they haven’t met the ‘right’ person and feel they can legitimise that view with the validation of their expert team of cluckers.

Champions – Ever been out with someone who seems like The Most Popular Person Ever or is “really respected” and “nobody has a bad word to say about them”? This will hook you if you need social proof. Champions are often friends and colleagues who are well meaning, but don’t know someone in relationship terms or only know what’s been presented. There’s also a definite element with Champions of often buying into One Time At Bandcamp tales of woe which they repeat to you without really knowing what the frick they’re talking about or just believe without question.

I know of someone who is having an affair. Honestly, you’d think the man was God the way people go around talking about him. I really don’t believe that the majority of harem members are interested in him, but they have him on a pedestal and they are constantly reminding the Other Woman of how amazing he is, that he’s definitely going to leave, and how ‘lucky’ she is. Any objections she raises to him, he even picks up the phone and calls a harem member to reassure her. These people are well meaning, but like all ‘Champions’, they doth protest too much and are actually helping him to overestimate his capacity to follow through.

People who have their own harem tend to bounce back very quickly from relationship issues that they have, because they never really have to face their feelings or experiences. Instead, whenever they experience problems, they send a text, pick up the phone, or go and have a whine and their members tell them what they want to hear. One day they might realise that they believed the hype too much and panic ‘commit’ to the next person or a harem member…let’s hope it’s not you.

Here’s what you should know: You don’t want to be a member of the harem. You don’t.

It might feel like they have it so much better than you or that if they weren’t around that things would be oh so much better, but to focus on the members is to miss the point – the harem chairperson is unavailable and isn’t satisfied by any one of you alone. That’s not because there’s something wrong with you or them (aside from the fact that you don’t seem to have better things to do with your time than be the smoke machine in someone’s life pumping into their bum); it’s because they’re unavailable.

The presence of a harem will gradually take its toll on a relationship as it will either feel like there’s so many of you in the relationship or it’ll just straight up eff with your head.

If they appear to treat harem members better, it’s because they are harem members. You as the person who is in a relationship with them, need more by definition. It feels safer to give and showboat with someone who would actually be hanging around on the fringes and feeding them with attention.

The ex is a fallback. It’s important to remember that they become attractive again when they don’t appear to have as much wants, needs, and expectations. They’ll also be glitter in their smoke, because in being a fallback, they’ll be putting in extra effort. It’s also safe to say that your partner may actually be their ex’s fallback option also.

If you’ve tried to make someone change and prioritise you over their harem or make you ‘equal’ and the relationship has ended, it’s time to realise that this isn’t because you’re not good enough, but because you’ve just fannied away your time trying to change them, and they’ve spent the same period of time trying to show you that they won’t.

Give it enough time and if you don’t get your self-esteem and boundaries in order, it will only be a matter of time until you’re a harem member.

Emotionally mature and rounded people don’t need to seek continuous ego strokes and would not put you in the mind effery territory of having to put up with it in the first place. Don’t compete; move on. Hanging out in a crowd in a relationship is not where you’re meant to be.

They're Just Not THAT Special and Why Putting People On Pedestals Makes Them Think They Can Do Bette...
Are You Trying To Be 'Good Enough'? Surprise! You're Already Are.
It's Not The X Factor: Stop Treating Dating Like You're Auditioning For An Expert Judge