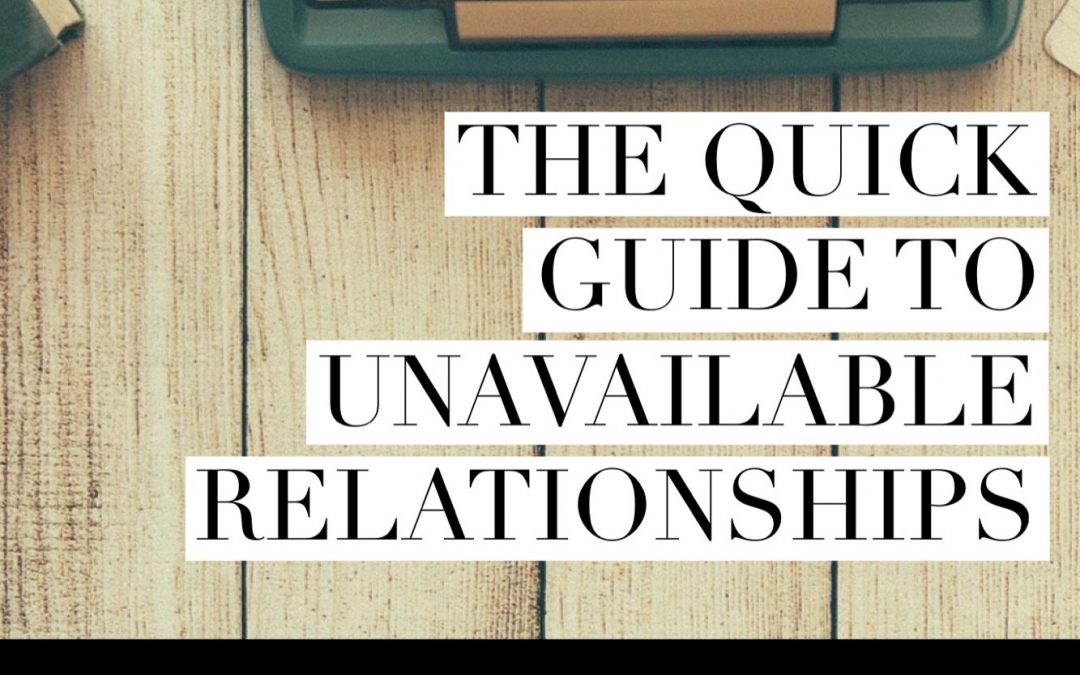 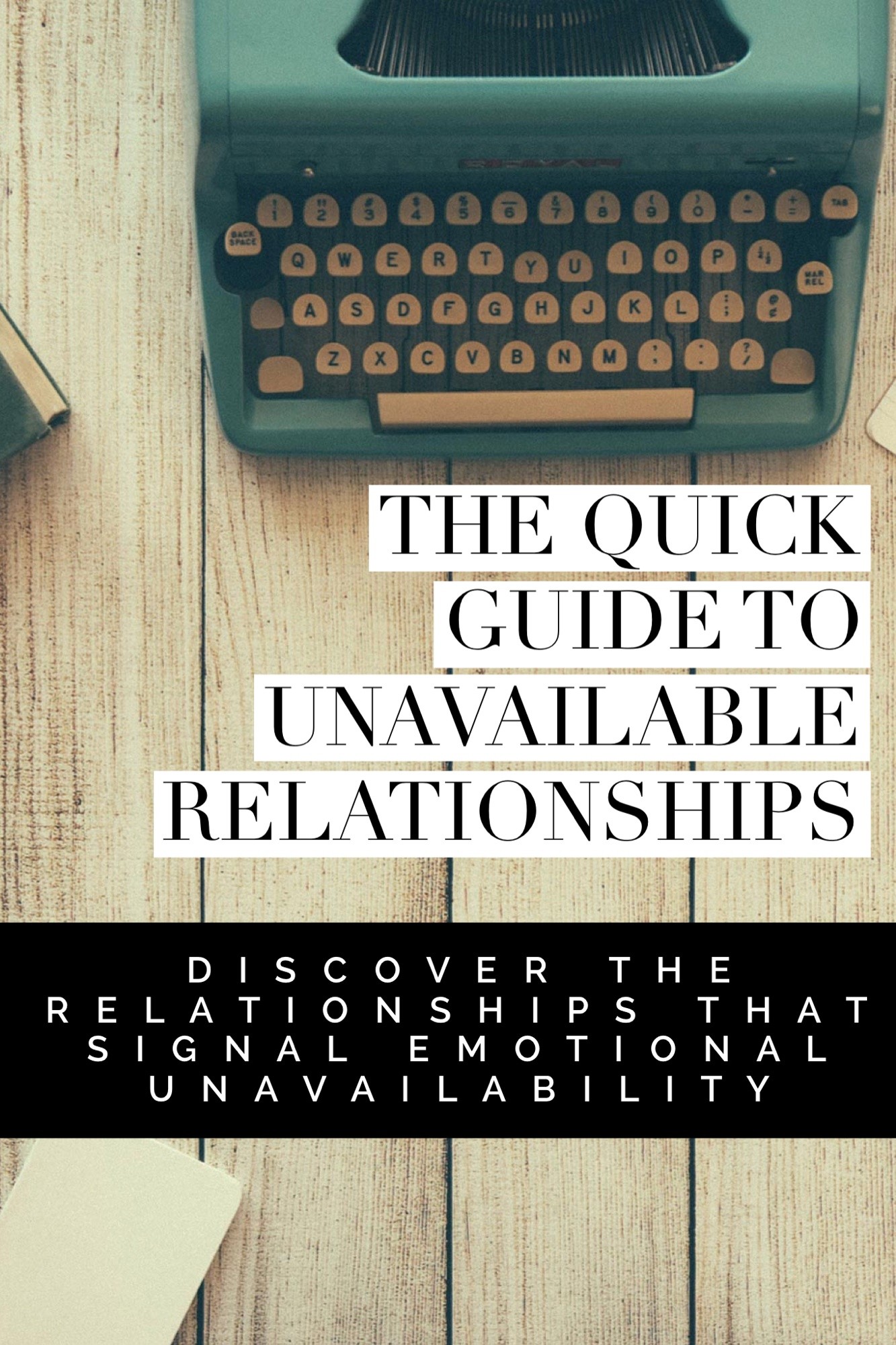 After several years of writing Baggage Reclaim and being asked numerous times “Are they emotionally unavailable?”, I’ve put together a list of the most common unavailable relationships , as I’ve realised that pretty much everything I’ve heard falls into eleven types of relationship.

‘Casual’ Relationships – Casual arrangements including Friends With Benefits and booty calls, as well as those who don’t want anything ‘heavy’ and like to keep it ambiguous and unlabelled. Think of these ‘relationsh*ts’ as someone getting all the fringe benefits without the commitment, intimacy or responsibility.

Boomerang Relationships – Can’t break, won’t break, your ex keeps leaving and returning, and you keep taking them back. Or, you keep chasing them down and waiting around, sometimes even being disruptive in their current relationship. If you’ve ever dated someone that pops up, gives you an amazing time, disappears for a while and then pops up again..and lather, rinse, repeat, these also fall under the boomerang umbrella. Got lots of loose endings? You’re the Yo-Yo Girl (or Guy).

Rebound Relationships – Caught between two relationships, this is basically not over an ex or the pain from a breakup, or the hurts from the fallout. This is recently broken up, separated, divorced, or widowed. And remember: people can be interested in you and even tell you that they’re ready for a relationship but how ready they are is self-evident. If you have a habit of being in rebound involvements, you are The Buffer.

Affairs – A messy combo of one person rebelling and the other competing, one or sometimes both of you, are cheating on someone else and you play second fiddle. It also includes remaining with someone that you know shags around on you or who has ’emotional’ affairs. Just in case you’re in any doubt, neither The Cheater nor the Other Person are available whatever their (or your) reasons for the affair. There’s no such thing as an honest cheat.

Dalliances – Typically characterised by being short-term, these are casual flings, one-night stands, or whirlwind romances that fizzle out. Think plenty of Fast Forwarding and possibly some Future Faking. Note – you may not realise it’s a dalliance at the outset.

Rehabing and Remodelling Relationships – This is excessive baggage particularly in the form of problems including addiction which you try to fix, heal, and help, and it also includes relationships where even if they don’t have any major problems, there’s a lot of control and demands for change. This also includes people who are making out that they’re getting help but just paying lip service to it and using it to hook people in and gain their confidence. If you need to feel needed, you have Florence Nightingale tendencies.

Long-Term Struggles – Some unavailable relationships can go the distance in terms of time but have all sorts of problems within them, even when there is history, a ‘title’, a legal piece of paper, or kids. Think of this like flogging that donkey till it collapses. This can include some casual relationships where you haven’t heeded the fact that they don’t want to commit but you stick to them like glue in the hopes they’ll change. Next thing a decade or two has gone by.

Fantasy Relationships – Fantasy relationships are about avoiding intimacy. They’re the combination of illusions and denial, but fantasy relationships also include virtual relationships and anything where because of distanced contact– this includes when you get hijacked by your feelings and then project them onto the person and assume there’s more between you than there is, and getting carried away with online relationships that don’t translate into offline at all or are mostly conducted through words instead of human interaction. I’ve also heard from a hell of a lot of people that wait around for someone that pops up occasionally and then disappears.

Abusive Relationships – Full of manipulation, there’s a presence of emotional, physical, and/or verbal abuse with use of excessive force and control.

Secret Relationships – This relationship is on the down low for whatever reason but often includes issues with race, religion, and family. However it can be as simple as them giving you some rinky dink reason why nobody else ‘needs’ to know, introducing you as a ‘friend’, working together (watch out – this is the easiest excuse for a secret relationship) and of course includes some ambiguous casual relationships. It also includes immensely secretive people who put up walls as well as people who are being ambiguous about their sexuality and drip-feeding revelations.

Excuse Relationships – Are they busy, scared, too tired, in need of more time, shy, dealing with a lot right now, ‘overwhelmed’ by their feelings, got a presentation in two years time that they need to prepare for, ‘overwhelmed’ by their feelings for you, got an ex that they’re tip toeing around, kids that don’t like you, a mama who needs ‘more time’, or just in a need of an extra day/week/month/year/lifetime to give you what you need? If you or they are making excuses, they’re obviously not available for a relationship not least because you or they keep lessening their responsibility with the excuses. If you’re the type that’s been reluctant to pigeonhole them into another category or reluctant to admit they’re unavailable, this is your relationship. Where there’s excuses there’s denial and there’s an unavailable relationship.

Dealing With Being The Rebound Girl
Are You Ready To Date? Can You Handle It Going Somewhere But Equally Can You Cope With Disappointmen...
What Changed? Making The Positive Choice To Choose You