Do we really need to keep screwing around with friendship? 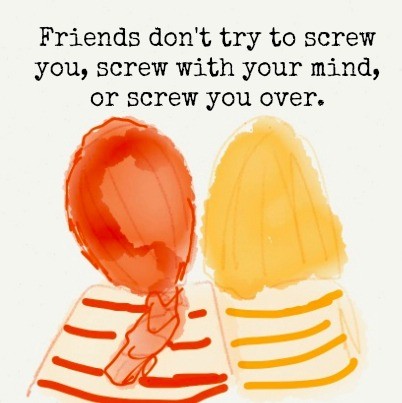 Sometimes I catch myself when I’m about to describe someone as a friend when they’re more of an acquaintance or near close to being a stranger and I correct myself. The mutual relationship between friends has become quite cheap in this day and age when you’ve got people who have one thousand friends on Facebook and barely two friends to rub together in real life. It’s not just the friend lists and faux friendships though; it’s the bastardizing of the term and what should be quality, valuable relationships in your life.

You should care about the people you call your friends and the quality of your friendships matter. It’s the fact that I genuinely value the people who I call friends and close friends why I don’t go racing around to put any ‘ole body in my circle of trust.

If you don’t trust somebody you call a friend, you’re not friends!

It’s also better to have one or two close friends you can really trust than a shedload of people you go around collecting like trophies as if, “Hey! Look how many friends I’ve got!” or “I must be one cool guy / chick because I’m friends with ALL of my exes. Did you hear that? I said all of my exes!”

We live in a time where we seem to love to water things down (casual dating – what the hell? – and the oxymoron that is casual sex) and knock stuff out at the cheapest price possible but we’re humans. We need care, trust, respect and love. We need friendship, you know, the genuine kind that exists between people with a mutual affection. It’s hard enough to navigate romantic relationships without decimating something that’s a valuable part of our lives both in and out of a relationship. Just remember, friends don’t try to screw you, screw with your head or screw you over. Take your time, show up as an equal and be a friend to you first.

In the Line of Fire: Are you getting carried away with policing your boundaries?
Knowing If You Feel Good In New Relationships Part One
Toxic Friendships