Exercising Your Right To Say NO & Having Boundaries Isn’t Immature 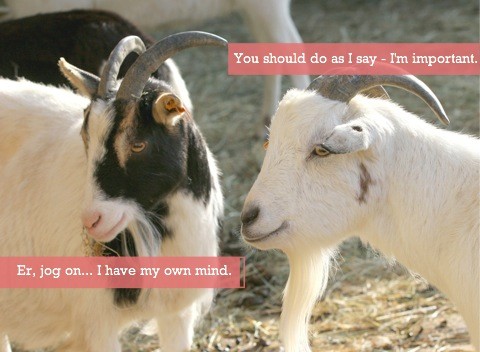 Recently, I’ve had quite a few people expressing their concern about ‘immaturity’:

“I’m trying to remain on good terms with them. If I stop being friends, I’ll look like I’m being really immature and that I’m throwing all of my toys out of the pram.” So you’re going to force a friendship while you internally writhe in breakup agony?

“Isn’t defriending on Facebook / unfollowing them on Twitter really immature?” – Note that Facebook and Twitter are just websites, not gods. These facilities exist to give you control over who you are connected with and to also reflect the severance of a relationship. In olden times, would you sit outside their house watching their life unfold? Er, no.

“I hoped that my obvious discomfort would put him off as I didn’t want to sound immature by saying something” – She also worried about being rude, rejecting him, and then making things awkward, and so ended up having sex on the first date. She’s 45 and was on her first date after a divorce.

“It’s very, very immature to expect someone to be honest about their situation – this is not how relationships work. For a start, me telling her from the outset that this wasn’t a relationship and reminding her practically every two weeks, should have been more than enough……We’re both adults – I didn’t need to tell her about the other girl! Don’t be ridiculous!” – He also added that it would have been ‘mean’ to be honest.

When you’re accused of being immature about something, while of course it might be a genuine case of being under emotionally or intellectually developed, or not acting your age, most of the time, they’re effing you over in the name of being ‘grownups’ and then claiming you’re unschooled in the nuances of adult relationships.

It’s like “Just be a man / woman about it!” Er, what? What you don’t realise is that someone who would sell you down the river if it meant serving their own needs, is actually claiming to have the high ground on you and implying that you should listen up and take note from someone ‘in the know’.

Next thing, you’re supposed to leap up and take part in a three-way with a gimp suit or head into their whipping chamber without a backward glance in the name of being ‘grown up’ about things.

And let’s be real – isn’t this whole covert, and actually sometimes quite aggressive attacking of one’s ‘maturity’, how many women in particular, find themselves knee deep in sexual and other dangerous situations out of fear of saying NO and being far too worried about how they’re perceived? Hell, it’s how some women end up being put on the game by their so-called ‘loving’ ‘partners’ in the name of helping them out of a sticky patch.

When you think you’re being ‘immature’ or even ‘frigid’ for not wanting to go along with something, it’s actually a sign that you’re engaging with someone in conflict with your values and you’re doubting and basically not listening to yourself, because you’re too busy trying to hold onto or gain their approval.

Being accused of being immature, takes most of us back to being teenagers and that in itself may be more than enough to send us down the path of pleasing others so that we can avoid resurrecting old rejection wounds. Let us also not forget the fear of the conflict and criticism that may arise off the back of it.

As a teenager, when I didn’t cave to pressure, it was out of fear of the consequences, often because some of them were known (such as the perils of taking E) and I’d rather risk social consequences than try it. Sometimes it was my own discomfort and what I didn’t know was my own developing values speaking up.

It didn’t matter why someone thought I should be or do something – what mattered was why I didn’t want to. Of course over the years, I said YES most of the time, because my own opinion stopped mattering to me.

How much does your own opinion matter to you?

When I’ve caved to pressure, it’s because of a perceived reward, or fear of consequences including change in how I’m perceived, rejection, or conflict. Sometimes it was naivety (or believing I was naive) and sometimes it was fear of being hypersensitive.

The truth is, it’s not immature to not want to text all the time and to not want to believe that someone who you don’t see very much or who keeps themselves at an emotional, communicative, and physical distance, is going to be a prospect for a full-on relationship. Is it really going to go from that to, for example, moving in?

It’s not immature to expect honesty. Anyone would think you were asking them to diarrhoea (yes that’s what I said) their thoughts and give you the code and the key to their mind. Honesty in relationships is about not lying to and deceiving someone about the true nature of the relationship, your intentions, or any facts that would not only alter existing information held by the other party, but would remove the needed mutual love, care, trust, and respect required for a healthy relationship.

It’s also not immature to not want to be friends straight after a breakup – it’s normal. It doesn’t mean you’re enemies (unless you actually are) but surely someone can’t expect to literally climb off you and the relationship and for you to just switch over to friendship mode? It’s like “We’ve just broken up! Would you mind giving me a chance to pull my pants up and give me some breathing and literal space so I can come to terms with what’s happened? Geez!”

Calling someone immature for being unwilling to play along with doing or being something that they don’t want to, is passive aggressive and at times outright bullying. Even worse, it is a sign of emotional immaturity on the part of the offender, that they are unable to empathise with your position and respect it, even if they don’t agree with it and it signals a parting of the ways.

Regarding yourself as immature for not being able to work up the appetite to screw yourself over, or for not being OK after the fact of screwing yourself over, is disrespecting yourself. You’re implying that having boundaries, having choices, and saying NO (irrespective of whether it makes sense to or suits the other party), whether it’s because it’s your preference or because you’re exercising your human right, is immature. Why agree with someone’s shadiness?

Is saying NO and having boundaries such a terrible thing?

This isn’t high school. You’re a grownup now and you don’t have to be or do anything that you don’t want to. It would also be a damn sight easier if instead of trying to force yourself to have someone’s values, or trying to convince them to change theirs, that you honoured your own values and found like-minded people who don’t trivialise your well-being, and who respect where you’re coming from. Maturity isn’t about doing what other people tell you but about being yourself and living your own life with authenticity and integrity.

The Trouble With Lying & Cheating (Why you need to stick to a low BS diet)
Learning To Trust Again: You've Got To 'Put Out' Some Trust & Then Adjust Accordingly
Reader Advice: If he doesn't want a relationship, why is he with her, when he could be mistreating m...