Don’t passively wait around for someone to be struck by the thunderbolt of conscience and consideration – take action! 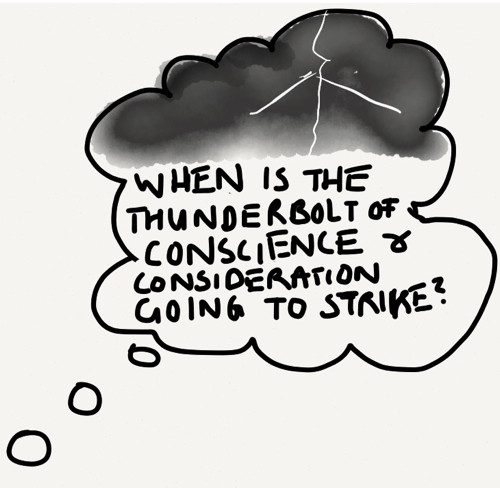 Sitting with a friend who was close to exploding over her frustrations regarding somebody’s inconsiderate behaviour that had been going on for a number of months, I asked her when she planned to say something. The tumbleweeds and blank look told me all I needed to know. So then I asked her at what point would she consider it impossible not to say something and was still greeted with a blank look. My friend wasn’t going to say anything because she hoped that by remaining passive on the issue but at the same time near burning a hole in her stomach with the stress, that this person would be struck by the thunderbolt of conscience and consideration.

She’s not alone in choosing to keep her true feelings and opinions zipped – I along with many others, have balked at the prospect of saying something or doing something about a situation. It’s like, ‘Why the hell should I get out of my comfort zone and invite the potential for conflict into my life? They’re the one who is being shady! I don’t want to have to speak my mind. I’d rather wait for him/her to be struck by the thunderbolt of conscience and consideration. Plus I don’t want to sound rude / pushy / like I care too much’.

Of course what happens next is a slow uncomfortable screwing over that’s made all the worse by also feeling that you’re screwing yourself over.

This isn’t one of those situations where a person does an out of character isolated incident. We all make mistakes and don’t realise that we’re not being quite as considerate of a person as we’d normally be. In these situations, you can normally say something even if there’s an element of conflict and unless it becomes handbags at dawn and blows up into something much bigger, it will likely be quickly resolved.

We tend to play the waiting game on a person recognising their inconsiderate behaviour, because the person is actively engaging in the behaviour and compounding it. Of course by maintaining our passiveness, the inconsideration becomes the status quo. If there’s what could be considered momentary inconsideration then that person is very likely to recognise it and apologise.

When someone is being habitually inconsiderate, while they might come to their senses on the issue without any intervention from you, the likelihood is that even if they do twig that there’s an issue, they may actually find it ‘easier’ to continue as is. It becomes the elephant in the room and the more stubborn (many of us are afraid of admitting that we’re in the wrong and would rather save face) and/or shady may argue to themselves that if it were that much of an issue, something would have been said, and that actually, that something ‘should’ have been said instead of ‘allowing’ it to continue.

Now of course there is a little truth to this but more in that it’s our job to ‘represent’ and others know our line when we know our line, so if we’re passive, the boundary isn’t known, even if really, it should be. In reality, while it’s very important for us to get our emotional house in order and ensure that we’re assertive when we need to be, the inconsiderate party has responsibility and accountability. Yes we can and should say something when we’re being jacked about but let’s not be mistaken in believing that it’s our job to teach adults how to behave themselves!

The other options – to coming to their senses that is – is that they start avoiding you, which can feel pretty bloody outrageous because it’s like, ‘Hold on a frickin second; so you would rather avoid me like I’m the one who did something to you instead of just acknowledging and apologising for your inconsideration?’ This may make your blood boil even more on the issue because then you feel bad for not having said something and may even start to question who was in the wrong. And then there’s the last option – act up so that you eventually erupt and then it becomes about your reaction, or find fault with you and then their inconsiderate behaviour doesn’t even make it onto the agenda.

Now my friend would rather have literally bellyached over this woman who was pissing her off at work than say something. She believed that remaining passive on the issue was ‘better’, after all, the inconsiderate person should own up to it. Of course it begged the question of how would this woman know that she was being inconsiderate but then in these situations it seems unfathomable that the person doesn’t know because we’re so aware and uncomfortable with it. Of course, I’ve heard too many stories that would suggest otherwise – some people aren’t that ‘aware’… or certainly have convenient blindness and rationalisations.

What we have to admit when we opt to suppress our feelings, opinions, needs, expectations and wants, in the hopes that another person will come to their senses and ‘do the right thing’, is that we’re doing this in lieu of taking appropriate and respectful action. Ironically we won’t flag up the inconsideration but are actually extending and compounding the inconsideration by being inconsiderate to ourselves.

We worry about being rude and you know, if you keep silent and then explode when you can’t take anymore or engage in passive aggressive behaviour, while although you can understand to a degree how this came about, it’s not particularly considerate either. Being rude is being disrespectfully honest or disrespectfully dishonest – being honest is about the truth with respect and actually, you can flag up an issue and even experience conflict without it raining disrespect.

Of course we’re only human and we don’t always handle uncomfortable situations in the way that we would prefer but we won’t keep smarting about it if we learn not to remain passive on the things that matter to us.