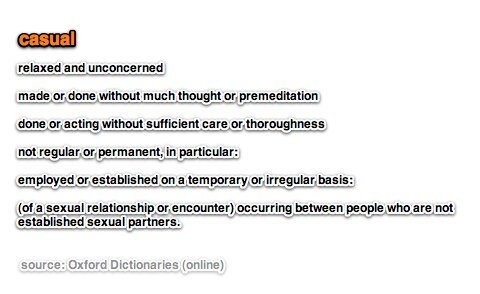 Several years back, in what turned out to be my ‘epiphany relationship’ that completely changed me, I was involved with someone that:

1) Pursued me and when we finally got together, he said he’d fancied me ever since we’d been introduced several months before (when he was in a relationship by the way…)

4) We hung out sometimes with each others respective friends

5) I did a lot of ego stroking

7) We went out to dinner and the movies

8. Called, emailed and texted me

9) I made myself available for him to make plans with

I believed we were in a relationship. I’ll admit I didn’t go so far as to call him my boyfriend but I thought we had something decent going on and that we were moving towards a committed relationship. Aside from 2-3 weeks of intensity, the remainder of our five month ‘relationship’ was hot and cold, where both the frequency of seeing each other and the level of contact went downhill and I just didn’t know what to expect or what the hell was going on. It was only when I started to fully acknowledge my discomfort and play the ‘relationship’ back that I realised it was a barely there relationship or as many refer to it, a casual relationship.

Knowing just how hot and cold and inconsistent our ‘relationship’ was, you would be forgiven for wondering how the hell I didn’t realise?

It’s because I was ‘thrown’ off the scent of a casual relationship due to what I saw as the ‘hallmarks’ of a relationship.

It really isn’t too great a leap to believe, that because someone seems to enjoy your company so much, you’re sleeping with them over a period of time, giving them an ego stroke, a shoulder to lean on, being introduced to friends and even family, and are even having references to the future slipped in, that you’re in a relationship.

However it’s best to stop taking that leap and recognise that just because someone does want to contact you, sleep with you, and look for emotional sustenance from you over a period of time, it doesn’t mean you’re in a relationship because without landmarks of a healthy, loving (or on the way to loving) relationship such as commitment, intimacy and progression, your relationship is all shirt, no trousers, ham, no burger, bread, no butter.

Don’t believe how misguided I was? When we finally had The Conversation and I told him that it was obvious that it wasn’t working out, he admitted that he didn’t want a relationship – when we’d got together, he’d broken up with his ex a couple of months before. He then proceeded to remind me that I was gorgeous, fun, intelligent, great to spend time with and yada yada yada.

I was his Fallback Girl and I gave him a soft landing out of his old life and helped him avoid whatever feelings he had about his previous relationship.

Even though our attitude to relationships and what we consider casual has changed over time and includes foolishness like Friends With Benefits, Booty Calls (read: Dial A Lay) and the ‘option’ to boomerang in and out of an exes life at will, most of us still have this idea that someone who doesn’t want a relationship or just wants you for sex, will shag you once, or even a few times and then disappear, or just won’t bother to be with you.

Most of us are conditioned to think that when someone wants to ‘use’ you in a casual way, it’s for ‘sex’. In fact, I in particular get men telling me again and again that it’s for sex and that we [women] should know this. The being used for sex thing is bullshit though, because there’s no need to mock up a pseudo relationship to get laid. The barriers to entry for sex have been well and truly broken down.

No, these ambiguous, confusing, often painful situations arise because the driver of the casual relationship (there is always one that wants it more than the other) is in for whatever they can get with minimal emotional contribution. Their ego isn’t content with ‘just sex’ and they need attention or even a human reminder that they don’t have the problems that they actually do have.

Doing all this other stuff makes their actions and intentions palatable. Just shagging around might say something else about them.

Ultimately, to be ‘alone’ would require them to deal with feelings that they’ve got very good at avoiding by always having a ‘passenger’.

The ‘passenger’, either doesn’t know they’re going on a casual journey and through a lack of boundaries, not paying attention to red flags, and being caught up in latching on to the ‘hallmarks’, ends up along for the ride, or…they do know which journey they’re taking but they think that they can cope with it/that it suits them or, they hope to change the driver’s mind along the way so that they change direction.

And remember: Often when the ‘passenger’ knows that it’s casual, they don’t expect to have relationship type ‘stuff’ expected or even demanded from them.

Of course, it’s like a slap in the face when it becomes clear that nothing more than what is happening is on offer.

The concept of someone fundamentally knowing (whether they admit or not) that they really don’t want to extend themselves beyond getting their needs met and that they don’t ‘see’ you in that [relationship] way is hard for most to grasp.

This is why so many people stick around in unavailable partnerings trying to prove themselves so that they can get validation that they’re not just ‘casually’ regarded.

Fact is, most people can’t handle casual, and the words ‘casual’ and ‘relationship’ in the romantic sense, just don’t go together too well, especially since some of these so-called ‘casual’ relationships can go on for a very long time if the ‘driver’ is very good at ‘passing time’, paying lip service to the idea of a relationship, but never actually delivering.

See the definitions of ‘casual’ (pictured above) including ‘relaxed and casual’ and ‘done or acting without sufficient care or thoroughness’ – none of these things say ‘relationship’. To expect someone to treat you with love, care, trust, and respect while in a casual relationship, makes it a relationship because your expectations are not casual – they’re meaningful.

Most of us want to mean something and we want that meaning to extend beyond ‘Good for giving me all the fringe benefits of a relationship without me having to actually even feel very much for them or put in much work’.

Much like when we get caught out by common interests because we don’t realise the importance of shared values, it’s equally important that we get wise to the superficiality that is so prevalent these days and recognise that we now live in a time where people can get so much more, for less.

In a time of instant access, instant communication, instant results, instant array of people to choose from on dating sites, instant sex, and a disposition to avoid feeling our feelings, society seems to have managed down our expectations of relationships and we have managed down our expectations of relationships because it suits where we are at emotionally. We have however, become too casual about ourselves and this is how we open ourselves up to having our boundaries busted and keep ourselves very far from the reality of a healthy, loving relationship.

Being ‘casual’ is so attractive to the emotionally unavailable – You appear to get way more for less without having to get vulnerable and be truly intimate, and which is exactly what you want to avoid. But while some have an active, vested interest in avoiding commitment and healthy relationships, there are lot of people who are unavailable as a result of a variety of factors and habits that just don’t even know what healthy looks like, but who don’t want to be treated in such a casual manner and who as a result of their own beliefs, self-esteem and habits are not always aware of the red herrings that are the ‘hallmarks’ without the ‘landmarks’ of a relationship.

You’re not going to turn a pig’s ear casual relationship into a silk purse full on relationship, especially because by having stayed, the other person becomes trained to expect that it’s what they get. If they can get a relationship without putting in the emotional and action effort, there is zero impetus to change and if they felt more consequences and didn’t get what they want for less, they might re-evaluate their actions.

At the end of the day, you’re free to do whatever you like and that includes relationship insanity and trying to get people to make you the exception to their rule, but if you genuinely want to be in a mutually fulfilling, healthy, loving relationship that can actually go the distance, don’t sell yourself short, and as soon as you become aware that your ‘relationship’ is all shirt, no trousers, you opt out. You can’t force substance.

Advice: How do I let go of my Mr Unavailable?
Guest Post: How I Know I'm Not Ready For A Committed Relationship
Seeking Validation & Understanding in Your Poor Relationships Part Two