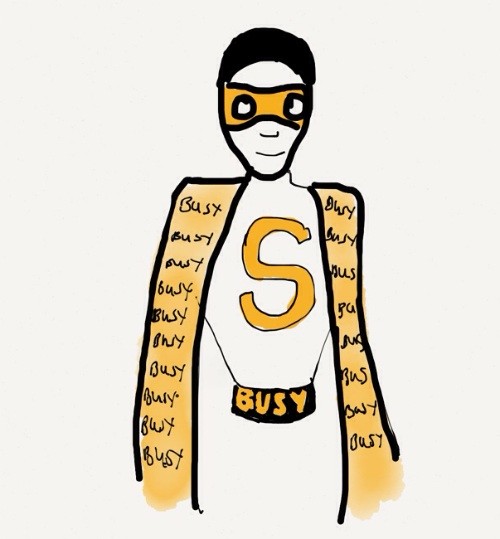 Many people protest about how “super busy” they are – I’ve been guilty of this at times myself – and I regularly hear the, “I don’t have time for dating” and “I don’t have time for a relationship” defences along with what pretty much amounts to, “You draw the short end of the stick including my casual attitude towards you and even my neglect because, well, you know – I’m super busy. Have I mentioned how important I am or how insane my job is, or how everybody wants a piece of me?”

I don’t dispute that we’re busy people living in a busy world. We live in a time where protesting about our never-shrinking todo list and almost competing about how crazy hectic our lives are is the norm. There’s also the pursuit of the work/life ‘balance’ plus the pressure we put on ourselves to be perfect and to achieve.

That said, if you’re someone who is doing the whole “I don’t have time for dating / a relationship” but saying that you do want one, or are expecting somebody who deserves better (and will probably keep giving you more of their time in the hopes that you’ll change your mind), to basically put up with you throwing them a bone from time to time, and are even justifying inconsiderate or even shady behaviour on your ‘busyness’, it’s time for you to go on a BS Diet.

If you genuinely believe that you don’t have the time to date, then don’t date or certainly don’t give potential partners the impression that you’re up for and are offering more than what you are.

If you don’t believe that you can spare a few hours a week, or you feel that you only want to use that time to engage in distant (read: lazy) communication and/or only want to use that time for sex, ego stroking etc, you don’t have time for a mutual relationship. You want to keep it casual. If a person having needs, feelings, expectations, opinions etc is ‘taxing’ and you’re already mentally working out how to stop them from getting ‘carried away’ (possibly without being direct and honest), halt.

Your reasons for not having time are your reasons – own them. You don’t need to justify those reasons to anybody once you honour them but when you don’t do this and engage in contradictory behaviour that may leave a person questioning themselves and certainly questioning your integrity, an explanation will be looked for because your flip-flapping and backtracking will create questions and confusion, even if to you, it all makes logical sense.

Until you’ve genuinely rearranged your priorities, or your work / home situation changes, or whatever it is, it doesn’t make sense to half-assedly pursue dating or a relationship for your own ego’s sake, or to tick some box in your head or with your family, friends or ‘everyone’, because ultimately, people are humans with feelings and lives of their own.

I’m not saying don’t get laid or have fun with likeminded folk; I’m saying quit with the whole I Am The Busiest Person On Earth, Possibly Busier Than A World Leader or Superhero protestations. You doth protest too much. Stop using it to manage down people’s expectations – manage your own.

Busyness is something that offers us protection from having to be vulnerable and having to face aspects of ourselves and our lives. You don’t think workaholics are the way that they are because they’re so crazy about their job, do you?

If you’re on the receiving end of this whole “I don’t have time for dating / a relationship” malarkey, take them at their word, not at their strokes whether they’re ego or sexual ones.

It’s hard not to take it personally especially when it feels like you’ve been having a great time or that you could be so great together ‘if only’ they’d put in the time, energy, effort, and emotion but fact is, as humans we overestimate our capacity to be and do certain things and when it all gets a bit too real for us and we don’t have the high of the honeymoon period to carry us along – everything feels great at the beginning including new habits and interests – the reality of what we’ve been saying and doing along with any expectations created plus our own feelings, is exposed.

The thing is, it’s not your job to open up someone’s schedule or their emotions for that matter. It’s their job to make time and if you take over their responsibilities, you will take away any foundations that would act as the basis for a healthy relationship. It’s not your job to convince a person into being involved with you or to make more time because you’re getting into the whole selling territory. It’s a slippery slope because they end up on a pedestal and this automatically makes your relationship imbalanced.

I hear from people who have been making the busy excuse for ‘partners’ for anything from months to 20 years. Sometimes we forget that we’re too old to be waiting for mummy or daddy to come home and make time for us. It’s also safe to say that we hang around out of fear that if we tell them to jog on, their schedule will magically open up for someone else. In the meantime, we accept crumbs and they have their behaviour reinforced by our continued presence because they don’t experience natural consequences.

Don’t let anyone put you on layaway!

If they can’t manage their time and ‘fit you in’ now, how are they going to fit you in later when there will be more commitment and expectations? What’s your plan – to wait around? To hang in the shadows? To be The Most Perfect Person On Earth TM and/or to have no needs, feelings, opinions etc? That’s a half life.

If a person doesn’t have time for you they don’t have time for a relationship which means that it can’t progress, it won’t be balanced, consistent, committed (in whatever guise that takes – it doesn’t have to mean marriage) or genuinely intimate, plus over time you will become desensitised to this treatment due to being used to that person (and you) using their super busyness to justify their behaviour and attitude. It certainly won’t be mutual but you’ll certainly be shortchanged.

Recovering from somebody doing a U-turn on their feelings or proclaimed intentions
Are You Being 'Too Sensitive'?
Are you a Responsibility Dodger or a 'But Girl' caught in your own 'Relationship Insanity'?