Those Who Doth Protest Too Much: Stop ‘advertising’ and just ‘be’ 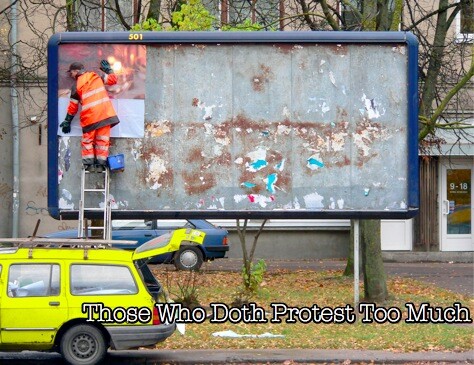 Over the years I’ve had the privilege of having many people tell me about the person they’re in a relationship with and I’ve noticed, that when things aren’t that great, or aren’t actually as great as they’re making out, they go to great lengths to emphasise certain characteristics and qualities. One acquaintance said at least thirty times in a recent 45 minute conversation that her guy was “great”, “nice” and “really not that bad once you get to know him.” While I’m sure a part of her was hoping to create a positive perception of him, my spidey senses and too much experience of this told me it’s Those Who Doth Protest Too Much.

The more you have to go to the trouble of saying something about yourself or another person, the less real it sounds. In fact, the more you emphasise a characteristic or quality, the more it begins to sound like convincing and justification. But who are you trying to convince? Them or you?

Probably the most popular examples of Those Who Doth Protest Too Much are people who keep telling you that they’re ‘honest’, ‘nice’, or even that all of their exes are ‘psychos’.

I’m going to tell you straight – I’ve never come across someone who goes on about how honest they are that is actually trustworthy.

The more they say it, the less likely I am to put my handbag down around them or trust them with anything of importance. I’ve had dates tell me they’re “really honest” several times and all I thought was “I wasn’t thinking you weren’t until you felt the need to advertise it!”

Those Who Doth Protest Too Much is advertising – let your actions, or the other person, or the situation speak for themselves.

You’re supposed to be a decent human being – the least you can do is show up with the bare basics of some integrity and be a respectful, trustworthy and caring person. People who are genuinely nice don’t keep telling you that they’re nice, they just act nice. It’s not even necessarily that they’re shady, but what you learn about them is that instead of being authentic, that it’s very important to them to convince others of who they are. They don’t believe in themselves enough to feel that you’ll ‘get them’ without giving you regular intermissions to push their ‘wares’.

An old colleague of mine would tell stories about exes and each one was written off as a ‘psycho’ – he was protesting too much! What he was advertising was that he was deluded about the reasons why he broke up and disrespectful. Either that or he was advertising that he had poor taste in women and playing the victim.

Some emphasise how generous and giving they are, often itemising what’s been done for others, what’s been purchased or donated, and the length and breadth of helpfulness. I’m sure many are generous and giving but they’re often overgivers who have hidden expectations and need to get something back. They’re acting nicer than they feel and are often motivated to give because they feel they have to in order to feel worthy, and then to validate that worthiness, they need external confirmation from a third party that they’re doing good. Or…they just like preening like a peacock.

Another interesting area of Those Who Doth Protest Too Much is post breakup. Now, it’s not about villanising a person but you do know that you can call a spade a spade, or talk about things that in retrospect you now recognise as unhealthy or at the very least as strong indicators of why you weren’t compatible, without saying “They were a good person though” or even “But they weren’t as bad as [insert someone who you have no problem saying how shady they were]”? The more you stress it, the less believable it is and invariably it’s not that they’re a villain but that you aren’t at the point where you’re ready to accept that irrespective of who they are, you didn’t feel good.

It’s also important to remind yourself that you’re not Judge Judy, God or a higher power – you don’t get to determine for the universe whether someone is ‘bad’ – all you need to worry about is judging the situation that has or had you in it.

On the very shady side of this issue are the people who go out of their way to create a particular image of themselves – they’re the worst protestors with something to hide. It may be nothing out of the ordinary other than that they’re not this exaggerated version of themselves that they’re putting across, but often, it’s duplicity.

Several years ago I was friendly with a couple who had been together for nearly a decade and married about for about a year. I kid you not when I say that every time I saw this guy in a social setting, he would stride around the room saying “I love my wife!” loudly. The first few times he said it, I didn’t pay too much attention although I did wonder why he was so declare-y, but after hearing it numerous times over a period of a few months, I knew beyond a shadow of a doubt that he was definitely up to no good. And he wasn’t. A few months later, it all came out that he was cheating with at least two other women, living part time with one of them, and handy with his fists.

One of the things I’ve learned the hard way in life is that people make up their own minds and unless we’re networking for business purposes, we don’t need to go around pitching ourselves or others. It’s also important to recognise that to be fair, when you have the verbal trots about someone it’s because you have a vested interest. Often you’re not ‘done’ yet and it may even be that you’ve carefully constructed your reality of things so it’s becomes imperative to get everyone else on side.

Take the acquaintance I mentioned at the beginning – this guy’s like a bull in a china shop when it comes to boundaries and has been physically and verbally abusive. She thinks she can change him by telling him about himself periodically, cutting contact and then giving him another chance. When she told me that I and her various friends and family have him all wrong, I asked “OK then, tell me three good things about him.” After a minute of er’s and waiting, we both laughed.

People with Those Who Doth Protest Too Much tend to fill in the gaps of action and genuine experiences that demonstrate these qualities and characteristics with too much words.

I get it – sometimes we’re really eager for our friends and family to like the person that we love, but you do have to ask yourself 1) why you have to keep emphasising certain things 2) why you can’t just let them see for themselves and 3) who you’re really trying to convince?

Stop ‘advertising’ and just ‘be’ or let things be. If you have to advertise someone else, let it be a warning to you that you don’t trust enough in these people’s judgement or even the ‘subject of the ad’, for them to either figure it out themselves or to demonstrate it themselves. It’s also safe to say that when you’re genuinely happy with someone…you have a happy life that reflects this with happy experiences to talk about that would illustrate this person without you having to say “They’re a nice person you know!”

The best way to convey the person you are is to be the person you are, living congruently with your values and doing things authentically as a natural extension of living your life in a way that makes you feel happy and good. Stop advertising and start living.

Stop Obsessing over How Men Communicate
You've Made More Progress Than You Think
To Tell The Truth: The Frustration of Dealing With Someone Who Lies About Your Relationship Or Their...
Share this...