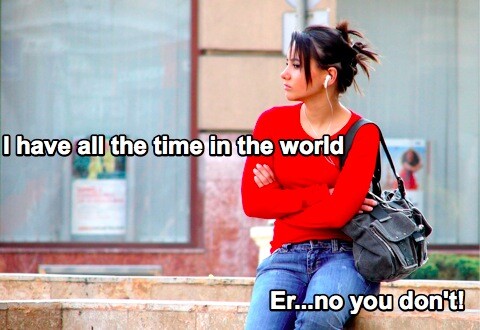 A few months ago, I spent 45 very long minutes circling over Heathrow airport waiting for a slot to open up so that we could land. It’s very irritating and yet I realise that like many people, in the past I’ve been trapped in a holding pattern waiting around for that slot to open up so I can take up what I feel is my rightful spot in the relationship I envision.

Every day I read comments, emails and Facebook postings that are code for:

“I’m still waiting for you”

“I’m waiting for you to spontaneously combust into being available/commitment ready/a better person/to leave your spouse or partner”.

And in particular “I know you think you can do better, but when you find out that you can’t, I’m here waiting for you”.

Here’s the thing: Waiting around for someone to make up their mind about you, to dignify you with contact, a relationship, decency, a change of self or whatever, devalues you. If you’ve been living your life in limbo waiting around, you’re breaking a fundamental personal boundary that will erode at your self-esteem.

It’s like buying a lottery ticket every Wednesday and Saturday and waiting in week after week for your numbers to come up. When people tell you you should come out, do something different, not play the numbers this week, you decline because you’re scared that the one time that you don’t is the one time that you’ll win. Your rationale is that life will begin once you win the lottery so you’ve invested yourself in the fantasy. Sometimes you win three or four numbers but you never hit the jackpot. One day you realise that you’ve literally wasted your life gambling on some seriously long odds. You thought the risk would be worth the reward but you end up regretting putting all of your eggs in a basket without a base…

If you’re waiting around for someone, you’re waiting for your numbers to come up. Unfortunately the fact that you have to wait in itself demonstrates that there isn’t enough or anything going on right now.

You’ve decided that this is what you want irrespective of any treatment and what them not being in a relationship with you now actually indicates, and this is incredibly dangerous, especially when they’re off living their merry life and you’re sitting there dutifully waiting or living the half life in pseudo relationships waiting for them to come back so you can race off into the sunset.

I heard from a reader who has broken off three engagements to three different men to go back to someone who has broken off their relationship and their engagement three times. If you can leave three relationships to go back to someone that’s flakier than a bad case of eczema, this in itself shows you were never really invested because you were passing time waiting for the one you really want to come back.

Here’s the thing: If you wait around for someone, let them boomerang in and out of your life, move onto new partners, and treat you like a ‘less than’ person, do you think they think:

“Wow, what a loyal, loving person they are.”

“They can’t be that great if they’ll put up with me treating them like this and rejecting the relationship and them time and again”.

Let me assure you that waiting around isn’t a sign of loyalty and love – it’s a sign of denial, avoidance, and low self-esteem.

Waiting around says “I don’t consider myself a valuable, worthwhile enough person to go and live my life without this person who doesn’t actually want me or the relationship I want with them. I’d rather fanny away my life and time that I don’t value hoping they’ll see the light because I don’t believe I can do better plus I’d rather avoid feeling ‘full’ rejection at any costs”.

Waiting around says “I have nothing better to do with my time”.

Waiting says “You’re free to reject me and come and go whenever they you like”.

Waiting says “I’m an option for you whenever you feel like it”.

When you convey that you’re a fallback option to whip out of their back pocket on a rainy day, that they’re able to contact you and pick up where they left off without much hassle, and you continue to believe in and keep them on a pedestal no matter what, you’ve communicated all the wrong things about yourself.

It’s much easier to convey that you’re a valuable, worthwhile person through action – sitting around, going through the motions of life, and selling yourself short don’t do that. Having a line, knowing the line, accepting that they can’t give you what you want and having more faith and confidence in you rather than them and living your life does communicate it.

I’ve also recently heard from people tying themselves up in knots waiting for someone they’ve just met to call – go out! Stop waiting around! You’re not in a relationship! Why would you remove yourself off the market, mentally and figuratively and bet on so much potential with someone who said they were going to call you?

How can you have so much invested in nothing more than an expression of interest?

You deserve better than waiting around for someone and while some people will be brazen enough to ask you to wait, often these are decisions you make off your own back because you’re ignoring vital information, have decided you know better and prefer your fantasy.

Waiting means avoiding experiencing a ‘fail fail‘ or a ‘rejection rejection’. The longer you wait, the crappier you feel and the harder it is to stop waiting because you then reason that so much time has passed that to stop waiting now would be waste of all the previous time spent waiting and you feel like you’ve invested too much to stop.

While it will hurt to stop waiting, it’ll hurt a damn sight less than if you continue waiting and refuse to accept reality. You’re better than being the person that they come back to after exhausting all other options. Don’t let them ‘settle’ for you after they discover that the grass isn’t greener on the other side. Why would you wait for them to sort themselves out with an ex?

You’re better than waiting to be chosen – in healthy relationships, you mutually choose each other and get on with it.

Waiting around is disrespectful and anyone who does expect you to wait for them is saying “I don’t love or care about you enough to value you and not marginalise you in a half life waiting for me. I’m afraid that if I let you go, I might change my mind and I won’t have the option of you so I’d rather have you wait. Just in case.”

Stop waiting around. It’s like gambling with your life. That fear that they’ll spontaneously combust into a better person in a better relationship with someone else is misplaced because just like fear mean it’s not happening, waiting around means it (the relationship) isn’t happening either.

Remember, while you’re waiting around, it means you’re unavailable for an available relationship.

Relationships in a Nutshell: Co-pilots, drivers, passengers and the importance of a joint agenda
Be Myself, Don't Fear NO, Passive Aggression Is a No-No & Other Personal Commandments I Live By
Mixing Up Optimism, Fear, and Denial in your Relationships - Just DO something