They Don’t Own You: When Someone Thinks That They Have A Claim On You 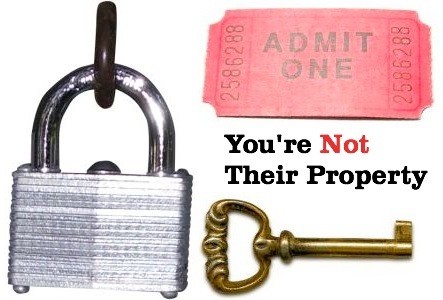 When I listen to people discuss their relationships, particularly with regard to exes, I realise that those who have unhealthy relationship beliefs and behaviours are inclined to have a ‘claimant’ mentality. You’ll know this all too well if you’ve ever been with Mr/Miss Unavailable – back off when you want them, chase you down when you tell them to take a run and jump or they see you trying to move on with their lives. Then you go and take them back after all of their desperation, grand gestures, and promises to change, only to find yourself back at square one days, weeks, or months later, or even for them to disappear as soon as they get confirmation that you still want them.

It’s as if by getting involved with a ‘claimant’, that unbeknownst to you, you’re entering into a contract where you sign over your relationship rights and provide them with the option to swan back into your life at any time irrespective of what you want and regardless of whether they’ve even earned the right to think that they should have any space in your life. The likelihood is that the more that you’ve pumped them up by overextending yourself for them and the more poorly you’ve been treated is the more entitled they feel to their claim.

You would think that this ‘claimant mentality’ only extended itself to relationships, but I know people who still get calls, emails, and texts from people that they had one date with five years ago after meeting them on a dating site, who seem to think that they can show up anytime and pick up where they left off or just tap them up for an ego stroke or a shag.

There’s a level of arrogance involved with this along with some ego issues that suggest that their self-esteem is founded on the ability to amass ‘property’ and access it for validation or to avail themselves of goods at their disposal … even if they don’t treat the ‘property’ right.

Of course, this territorial sense of ownership is largely about control – “I touch it, I own it. I sleep with it, I own it. You expressed interest in me, I own you … even if I’m not really that interested in you. Someone else wants you, I’m now interested, I have to own you.” When a ‘claimant’ experiences something going awry in another area of their lives (maybe one of their ‘properties’ knocks them back, or they attempt a takeover and get rejected), you’ll notice that they check in on their ‘assets’ which gives them the illusion of being in control and validates their ego.

Claimants associate feeling out of control with desire, so of course when you’re behaving as expected, they lose their ‘relationship erection’.

What is of course completely bonkers about this, is that the claimant’s seem to think they wipe out all of your prior involvements and that they can liberally erase or cock up any subsequent involvements. It gets even more bonkers if you’ve been with several claimant’s so they all seem to feel that they have ‘rights’, are holding on to their ‘key’, but they’re not actually willing to occupy a mutually fulfilling relationship with love, care, trust, respect, and shared values.

They desire you when they feel in danger of losing you or when someone else expresses interest – you tell them to step up or let you go, only for them to step back once they’ve secured ‘control’ and validation again. They feel territorial but what they don’t seem to feel and demonstrate is love, care, trust, and respect. They want to own you but they don’t want to truly value you.

You’re besotted with them.

You’ve never got over them.

Even if they effed you over and broke your heart fifty years ago, that they have a right to another shot when they demand it and that you’ve been fannying away your life waiting for a rejection retraction and reconciliation.

If they’ve decided to feel bad about their past actions, that you must be consumed by thoughts of them, and are still hugely impacted and waiting on them.

You’ll ego stroke and listen to their problems.

They still know the right moves.

You think they’re the best you’ve ever had and nobody ‘gives it to you’ as good as them.

Nobody has ever measured up in character to them.

They make your life oh so much better, even with their crumbs.

They have the right to lose interest or park it, only to resurrect their interest when someone new is sniffing around you.

They have a right to pee a ring around you and block parties they know from approaching you.

Claimant’s, often without truly realising it, have delusions of grandeur. They’re living off this premise that everything is about them and that even if they’ve had you on a crumb diet, that they’ve been stuffing you with golden loaves.

You are not someone’s medal or trophy that reminds them of how great they are or how they can’t be ‘that bad’, nor are you a discarded plaything, an unreturned library book, or furniture and bric-a-brac with a cloth over it in a dusty attic. You certainly shouldn’t allow yourself to be the mannequin in someone’s House Of Ego Horror’s.

They don’t own you just like you don’t own anyone else. This means that you shouldn’t be selling yourself down the river to the lowest bidder and settling for less than you deserve.

Claimants never step up and treat you right. After a while, they make enough claims on you that they feel confident that they’re in no true danger of losing you. This is when you notice that their chasing efforts get feebler and lazier.

Whenever there is a sense of ownership, particularly when there is no actual relationship or they don’t treat you as a valuable, worthwhile person, you know that not only are you not in a mutual relationship, but this person is not the one for you. Control including jealousy and possessiveness isn’t love; it’s control.

The key thing in all of this though is that you shouldn’t render yourself helpless by behaving like someone else’s property. When it’s over, it’s over – don’t allow people to continue to enjoy the same access to you and certainly don’t remain open to the possibility of them coming back because it makes you unavailable for an available relationship. Next time, it’s petition for the claimant denied – next!

PS If you want to see a claimant in action and are in the UK, check out Spencer Matthews on Made In Chelsea

The story isn't the same as the truth
Tips for The End of a Friendship
But Seriously, How Long Is This Going To Take? - An excerpt from The No Contact Rule (2nd edition)