Are You Hankering for the Zsa Zsa Zu or Chasing a ‘Feeling’? 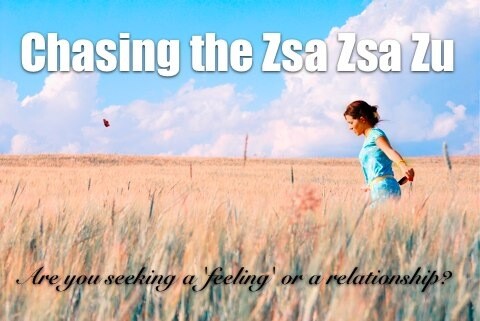 “I’m taking great pains to ensure that assclowns and emotionally unavailables don’t even make it through the vetting process. But I’m missing the za za zu. I’m not finding that any of these men who we would consider stable, datable men, can make my heart skip a beat, which makes me wonder: does part of the za za zu come from these guys being distant/a little dangerous/naughty/etc, ergo more exciting?”

While I’m not keen to use Sex and the City (much as I love it) as a linchpin of true to life portrayals of modern relationships (yes that wedding), Christine’s question originates from when Carrie asked “When it comes to saying ‘I do,’ is a relationship a relationship without the zsa zsa zsu (aka: that special something that gives you butterflies in the stomach)?”

I regularly hear from women that say that they want to be treated like a princess, to be swept away by a prince (yes really), to feel flutters, butterflies, fireworks, excitement, and ‘passion’. Who are they all dating, mooning over, flogging that donkey till it collapses with, or holding out for?

Someone that’s ambiguous, that’s amazing when it’s good and in the pits of hell when it’s bad, who doesn’t call when they say they will, will screw them well as well as screw them over, can’t commit, won’t commit or even belongs to someone else, says one thing does another, rolls out a red carpet future and replaces it with a sample size piece of carpet or disappears, fast forwards them with a major intensity that gets replaced with lukewarm or even a cold tap, uses them, may even abuse them, and may keep them as an option in their back pocket. That’s just the tip of the iceberg and it was exhausting to write!

If you get excited by being jerked around and not knowing your arse from your elbow but feel ‘Meh’ around decent, available partners, it’s time to evaluate what ‘excitement’ really means to you.

A lot of zsa zsa zu comes from the unknown.

Unless you’re planning to avoid the security that comes with ‘the known’ (aka what some of you call ‘boring’ or ‘too nice’), keeping so much ‘unknown’ in your relationship is a killer to the landmarks of healthy relationships – commitment, intimacy, progression, balance, and consistency.

Too much unknown means you can’t know what to trust or expect unless they become consistent at being inconsistent which makes it the new consistency but still a pain in the bum.

I’ve lost count of the number of times I’ve felt the zsa zsa zu, so much that it’s almost reduced to something as banal as putting milk and two sugars in my tea. As I got tired of being dicked around and being ‘excited’ (read: anxious) about some guy that wasn’t even in the same relationship as me or was unwilling to step up, I had to ask “How’s that working out for you, Natalie?”

Since I was 13 in Dublin and allowed to go to the discos on a Friday and until I was 28, I chased and tried to hold on to a feeling. If you’ve read my post on dating reflections of your father, you’ll know that chasing a feeling with my ‘type’ turned out to be “daddy hunting”

“…I took an already very imperfect man with not so great relationship habits and basically tagged on him loving me unconditionally and making me feel all the things I didn’t feel for myself and doing everything I thought that relationships were all about…and then went out looking for it. This person was a figment of my imagination and I’d made a person with conflicting qualities and characteristics and expected it to give me a relationship it was incapable of giving.

I wouldn’t go dying on your ‘type sword’ if I were you. Many of us claim that something or someone is ‘right’ for us, even when we feel like shite and it’s so wrong. If your type yields unhealthy relationships, why would you keep flogging and trying to get it to make you the exception?

If you feel chemistry with someone that’s unavailable, it’s actually due to the ‘synergy’ between you both being unavailable. If you don’t have the common ground of a mutual relationship, there’s no point in going on about how they’re a great lay that listens to Mozart, loves fine food, 18th century poetry, and bungee jumping.

After the boyf asked my friend for my number, I was pleased, but I didn’t dwell on it and fantasise like I normally would. He went away for ten days, I was surprised and a little gleeful that he called and then we went out. On our first date, I was VERY CALM. We had a brilliant time. There was no antsy feeling or crazy butterflies and in fact I felt very peaceful and at ease. I was relieved.

Familiarity would have been a sign of the typical Mr Unavailables I went for.

Bar a week after we started going out when he fell asleep after a round of golf and didn’t call and I marked his cards as a twat for 30 minutes before I called him, I’ve never had to deal with ambiguity. If that means we’re lacking the ‘zsa zsa zu’, I’ll take it. The evolved me doesn’t get turned on by wondering if someone will show up, analysing the crappola out of the relationship, or living scared all the time.

This feeling is great, whatever it’s called. Relationships and feelings are the sum of a number of things, not just one. You can’t ‘make’ a relationship on ‘zsa zsa zu’ which reminds me of a quote from Mr Unavailable and the Fallback Girl:

“Why do you think it’s so easy for certain Mr Unavailables to dip in and out of a woman’s life over a period of years?

You need more than occasions, moments, and ‘good times’ as you will end up building sandcastles in the sky. A mutually fulfilling relationship and excitement are not mutually exclusive but it’s unrealistic to expect to feel excited all the time.

Do you want a rollercoaster or a relationship? You’ll notice that no-one rides rollercoasters 24/7 and the thrill wears off after a while.

For love to take hold and grow, steadiness is needed. Relationships full of hot air and excitement go in fits and starts, regress or come to a halt and if steadiness and the known bores you, a rollercoaster awaits. Much like the pleasure seeker that chases bigger thrills, you have to accept the risks that come with it.

As an ex drama seeker and maker, I admit to initially having moments of feeling unnerved by normality but it would be crazy to kill off the best I’ve ever felt, to go back to a feeling I’ve had at the worst I’ve ever felt.

Instead of chasing a feeling, focus on having a mutually fulfilling relationship that feels good with love, care, trust, and respect present. If you embrace these things instead of seeing them as a dampener on your libido fire, you get the excitement of sharing your life with someone, of being yourself, of making plans and actually seeing them happen.

About dating when you want children
Advice: Why do bastards change into ideal partners?
Dropping the illusion of words to be action focused in your relationships