More on deal breakers: Knowing what will break your relationship deal…even when you’re crazy about them 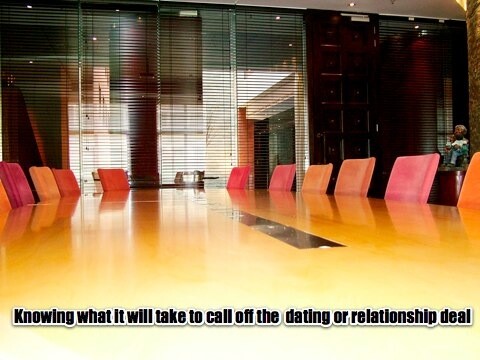 In my last post I wrote about deal breakers, you know those things that you cannot overlook or accept in a relationship that will have you declaring that you’re out. The comments as always were interesting with some expressing their concerns about what would in essence amount to forcing themselves to be attracted to someone, which is to somewhat miss the point.

Not only would these be pretty unpleasant situations for you but they’d be incredibly disrespectful to the other party. None of us, and I do literally mean none of us, are that special that someone should be treated that way as a result of our ambivalence.

What deal breakers are about is recognising that some ‘deals’ i.e. relationships, are not good to go.

Sometimes we make a ‘deal’ in good faith. And then sometimes we make a deal where the basis of the faith is a bit dodgy as we’ve gone in loving and trusting blindly. We basically initiate deal proceedings (dating) or get into a deal (relationship) that it turns out we need to get out of or that you both need to clarify what the deal is and seek to get the deal back on track.

A deal breaker isn’t casting your eye over a dating site or a nightclub and going ‘long hair, deal breaker’, ‘overweight, deal breaker’, ‘doesn’t earn enough, deal breaker’, ‘unattractive, deal breaker’ because you’re not in a deal with these people. If we look at deal breakers in this way, it’d be like me walking down the street tomorrow and not realising I’m being appraised and flushed out even though I’m not in the market for a deal.

Where a deal breaker presents itself is during dating or once you’re into a relationship.

Dating is a discovery phase where both parties while enjoying themselves should be discovering the facts about one another and ultimately working out whether there is the capacity for a mutually fulfilling co-piloted relationship.

That capacity shouldn’t be based on a wing and a prayer, assumptions, or denial – it should be based on the facts that you’ve discovered. By dating with your eyes and ears open and recognising what is and isn’t appropriate for moving forward into a relationship, ideally you can, for example, identify code amber and red behaviours during this phase.

Often the very things that we turn a blind eye to in the ‘honeymoon phase’ are what come to bite us in the bum further down the line. When we ‘wake up’ in a relationship and have to acknowledge that there’s a difference in values, they’re all talk no action, are non-commital etc, that’s because the due diligence on the deal wasn’t done – we were likely blinded by looks, sex, words, money, common interests etc.

You then find yourself in a deal that you’re trying to renegotiate the terms of or extricate yourself out of. If you’re the flogging that donkey till it collapses sort, you’ll keep renegotiating and renegotiating till what you had in mind for a relationship has been obliterated.

Failing that, you might do a Jennifer Hudson in Dreamgirls and sing ‘And I’m telling you, I’m not going. You’re the best man [or woman] I’ll ever know, There’s no way I can ever go………….You’re gonna love me’.

The truth is that you can get into whatever deal you want to get into but it’s better to make a quality deal and know that if you’re not in this deal with your self-esteem, it’s time to opt out and break the deal. If there are problems in this deal that can be addressed by both parties co-piloting the issue, then so be it, but if you’re going to try and do the loving and the work for the two of you, the deal is off.

So how do you construct your deal breaker?

Deal breakers should be constructed around the premise of: Even if I’m wildly attracted to someone and they look how I’d like them to, the sex is great, we share similar interests, and I feel that I love them etc, what type of behaviours would they have to engage in for me to break the deal?

There’s a simple reason for this: If you’re not that fussed about someone, no matter how lovely they are, you’ll break the deal easier because you’ll deem yourself not interested. It’s breaking a deal with someone who you are interested in…even if it’s for the wrong reasons.

Let’s take it as a given that you’ll get involved with people that you’re attracted to – you only have the attraction and a certain amount of information to go off. You then have the personal responsibility to assess the risk and see if the person behind the attraction stacks up values wise and ultimately wants the same mutually fulfilling relationship that you do.

Your responsibility is to ensure that what you love and are attracted to stacks up for a mutually fulfilling healthy relationship. If not, the deal is off.

What are your boundaries? If these are disrespected, these are deal breakers.

Do you recognise code amber and red behaviour? These are deal breakers.

Do you recognise what direct and indirect rejection looks like?

Do you know what your values are, the things that you believe are fundamentally important to your happiness and help shape your life direction?

What would have you working against your core beliefs? The amount of people I hear from who tell me they’re involved with someone from a different religion or race that’s sleeping with them but saying they don’t believe in dating outside their religion or race is ridiculous.

Is anything you’re saying that’s a deal breaker, something you actually are yourself?

Attraction doesn’t change the fact that the behaviours are deal breakers.

You can then say: Even if I did love someone, if they hit me, I’m out. Game over, no credits.

Even if I was deeply attracted to someone, if I was disrespecting myself as a result of my involvement, I’d have to step back.

No matter what the chemistry is, I don’t stay with people that cheat, lie, disappear, and flake out on their promises.

You also have to ask yourself: If I feel good in a relationship (including attraction, sex etc) and we share the same values but they don’t ‘look’ like my ‘type’, is that a deal breaker?

I know someone whose deal breaker was that she wouldn’t be with a white guy or someone who is ‘overweight’. This intelligent man who sat down beside her one day, chatted her up, took her on great dates, shared great times with her and had the same values was…white and overweight. I’m glad she stopped fighting it – they’re now married with kids.

I’m not telling you to run off and date what you don’t like but what I am saying is that we are often blinded by ‘type’, looks, and ‘chemistry’ with people that we’re actually vibing with for the wrong reasons. This is why I hear from so many readers in poor relationships trying to make a pigs ear into a silk purse.
Don’t limit your options. Knowing your deal breakers gives you self-esteem but reminds you of what’s important – feeling good in a mutually fulfilling healthy relationship instead of hanging on to a relationship that’s good on paper but not up to much in the flesh that leaves you feeling hungry and hurt. That is a deal breaker.
Your thoughts?

Some people hover just below your boundary line
The Quick Guide To Unavailable Relationships - Including Casual, Rebound, Affairs, Dalliances and Se...
Breaking Up With No Reason