Are You Being Blinded By ‘Good Points’? 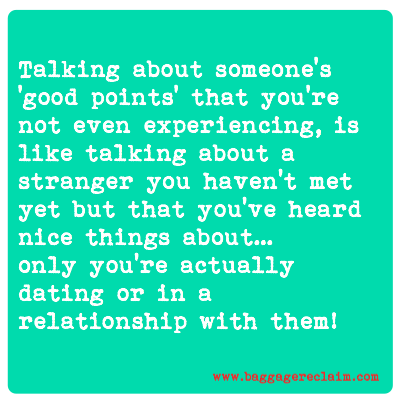 If you want to find yourself staying in a relationship long past its sell-by-date, one of the easiest ways to do so is to focus on the trees instead of the wood, and pretty much visually and mentally chop up a person into so-called ‘good points’ and ‘bad points’. It’s this getting hung up on these ‘parts’ of a person that you end up treating as if they’re more valuable than the whole, and minimising or even flat-out disregarding these other ‘parts’ because they almost contaminate your vision of them and your plans.

What you forget when you talk about ‘good points’ is that you’re talking about and relating to only ‘parts’ or ‘points’ of a person instead of the whole person.

The truth is, you only divvy up someone who you’re involved in a romantic relationship with into ‘good’ and ‘bad’ when the sum of the two signals that you and that person in reality aren’t compatible. When you truly like, love, care about, respect, trust and value someone, it is them as a whole that you accept and talk about. In the end, it’s not really about ‘good points’ versus ‘bad points’; it’s about whether you can progress into a mutually fulfilling relationship with that person in their entirety.

People come as a package deal. When you get blinded by ‘good points’ and even override concerns with them and ignore code amber and red behaviour and issues, you’re doing the equivalent of shoving bills under your carpet and hoping that the problem goes away.

Why do we get blinded by the ‘good points’?

We all have ideas about who we think we’re compatible with. We’re, rightly or wrongly, attracted to certain qualities, characteristics and values and when we find ourselves around someone who possesses some of these, we can have a tendency to leap forward mentally and assume that they’re going to possess other qualities, characteristics and values that we desire. This creates a false image of this person that we’re relating to and in turn, when our hopes and expectations that we’ve made based on these assumptions are not met, we feel deeply disappointed.

Of course it all depends on what we find attractive and value in the first place. I decided to do an exercise I’d put together on ‘type’ for The Pattern Breaker course and I decided to write down the things I used to look for in a partner. Not only was I completely mortified when I realised how frickin’ short the list was, but actually, there was absolutely nothing, and I mean nothing about values on there.

That doesn’t mean that I didn’t have any values (although like boundaries I used to pay more lip service than action to them) but to be honest, I was looking to feel loved, desired, to get a tummy leap of butterflies (turned out to be fear…) and someone with a good job who was ideally around 6ft to 6ft 4. If someone was hitting some or even all of this criteria, I was blinded and invested. Then it would be “But they pursued and pursued me and I was so excited at their declarations of love and yada yada yada, so why the hell do I feel so hellish?”

One reader stayed in a barely there relationship with someone for 3 years because when he blew in on the wind occasionally, he brought her flowers, took her to dinner and showed her a good time and was a great lay – this was what she’d always wanted from a relationship partner although she had expected them to come bagged and tagged with a relationship. She also mentioned that he had a great job, was highly respected, was liked by his friends, was kind to this one and that one and when he was around (they tended to communicate by text and email), he would listen to her “like no-one else”. To be fair, if I was him and I only had to show up twelve times a year or so without any questions as to what the hell I was doing for the other 353 days of the year and I was assured of good company and a shag, I’d listen to her too.

What really throws people about ‘good points’ is the beliefs held around these ‘good points’ – it’s this idea that having these good points means that they must be a better person than we’ve had the pleasure of experiencing (so we believe that there’s more to them and bet on potential) and/or it’s being convinced that if someone is able to be and do A,B,C then they must or in fact should be able to be and do X,Y,Z even if they repeatedly demonstrate that this is not the case.

The funny thing is that often the things that we believe that they ‘should’ be able to do are being negated by the ‘bad points’ that we keep trying to play down and disregard!

You have to realise though – people can have the good points you believe them to have and not be ‘right’ for you or a relationship. Believing that the good points mean that you should be together is like believing that you’re only ever going to decide you’re not interested in someone who has 100% bad points. Sure, who are you thinking that you’d be turning down then? A serial killer?

We can be inclined to try to put people in the good or bad pile but that’s not really our job in life – you’re not God, a higher power, or even Judge Judy. If what you have in mind is to have a relationship that’s able to go somewhere and the person has these so-called ‘bad points’ that mean that your relationship isn’t going to go where you want, you just need to judge the situation. It’s not like you can say “Let’s stay together but leave that side of you that you know I don’t like behind”, which is actually what you may be inadvertently trying to do.

Somebody having ‘bad points’ doesn’t necessarily make them a bad person but if those bad points put a wrecking ball through the possibility of a mutual healthy relationship, it’s time to judge the situation as unworkable. Equally, someone having some ‘good points’ isn’t something you need to make a song and dance about… unless you’ve been surviving on a crumb diet.

It’s not that you shouldn’t appreciate what someone’s good points are but it would be even better if you appreciated who they were as a person, even if recognition of reality writes off or reduces whatever hopes and expectations that you had.

When someone really is that great, not only will you not have to hide their ‘bad points’ in your mental closet, but you won’t have to keep justifying and reminding yourself – you’ll be too busy enjoying the relationship and living.

Appearance isn't the same as worth
Feedback from our expectations and choices helps us to better meet our needs
Podcast Ep. 100: Are You Exceeding Your Bandwidth? (You Are Not The Energizer Bunny)